0 0
The automatic version of the Mahindra XUV300 has been officially launched in India. The XUV300 diesel-AMT is available in the W8 and W8 (O) variants only.
People also view The Mahindra XUV300 AMT has been launched in India at the price starting from Rs 11.5 Lakh (Ex-showroom). The automatic variant of the XUV300 is offered with two variants, W8 and W8 Optional, both of which are feature-rich.

Powering the Mahindra XUV300 AMT is the same 1.5-litre turbocharged diesel motor as seen in the manual XUV300 version. It comes to produce a maximum power of 117 HP and the peak torque of 300 Nm. This mill is mated to a Marelli-sourced 6-speed AMT unit which features two modes- Manual and Auto along with a creep function. 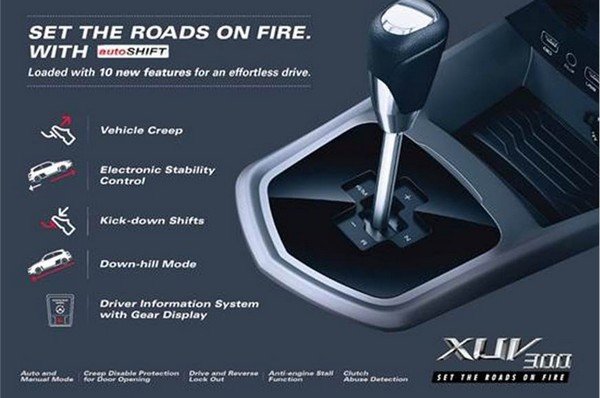 The Marelli-derived 6-speed automated manual transmission of the XUV300 offers two modes and a creep function.

The Mahindra XUV300 was introduced in early 2019 and became the priciest model of its segment. Still, the popularity of the sub-four-metre SUV made it the second hottest-selling model in the segment, just behind the best-selling Maruti Vitara Brezza. However, after the Hyundai Venue’s rollout, the Mahindra XUV300 fell to the third spot that forces the carmaker to fill the gap with the introduction of an automatic variant.

The Mahindra XUV300 AMT has joined the competition with the likes of Maruti Vitara Brezza AMT and Tata Nexon AMT. While the Mahindra’s offering might command a premium over its arch rivals, it still makes a compelling package itself with the most powerful powertrain and the lengthiest feature list of the lot.

In another development, Mahindra has just launched the Mahindra Thar 700 special edition in India and is gearing up for the launch of the next-gen Thar in 2020.