Will the newcomer Mahindra XUV300 or the familiar Ford EcoSport win a quarter-mile race? Check it out in a video here

Mahindra XUV300 was launched earlier this year. Promoted as a well-equipped SUV with a load of premium features, the XUV300 is quickly gaining popularity. Just last month, the new model celebrated two consecutive months of being the second best-selling car in the sub-four-meter SUV segment. By becoming the second-most top-selling model in its space, Mahindra XUV300 has defeated models like Tata Nexon and Ford EcoSport.

Unlike the fresh-faced XUV300, Ford EcoSport has built its name as one of the most trusted vehicles in the market over the years. It was also among the first successful cars in the compact SUV segment in India. However, with the entrance of other newer models, the Ford EcoSport isn't among the highest grossers anymore. Last month, it was the fifth best-selling model in the sub-four-meter SUV space. Obviously, the Mahindra XUV300 has triumphed the Ford EcoSport in terms of sales volume. However, would the newer and more technologically-advanced XUV300 become the winner of a drag race? Let’s find out the answer by watching the following video.

The models used in the drag race are South African-spec vehicles. However, these models are mostly similar to our versions. After being introduced in the domestic market, Mahindra commenced the export of the XUV300 to the South African market. On the other hand, the Ford EcoSport appeared on the video is of the pre-facelift version but the powertrain is the same as that of the facelift version. 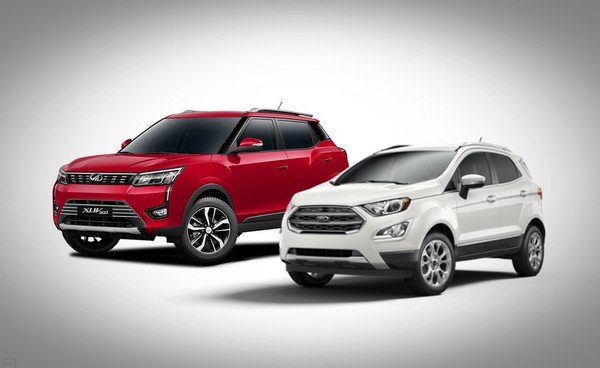 Both of these models  are powered by 1.5-litre diesel engine

Notably, the engines of the two vehicles are of the same displacement. The 1.5-litre diesel engine on the Mahindra XUV300, which is carried over from the Mahindra Marazzo, is good for 115 Bhp and peak torque of 300 Nm. It is paired with a 6-speed manual gearbox. On the other hand, Ford EcoSport is powered by a 1.5-litre engine that churns out 99 BHP and 205 Nm. This engine gets a 5-speed manual gearbox. At the moment, no automatic option is available on the diesel XUV300 and the Ford EcoSport.