Recently making its global premiere, the Renault Triber has now started rolling off the production lines and will be launched on August 28. Renault dealerships will start accepting booking for the new Triber in just a few days.

Making its global premiere in Delhi recently, the Triber MPV is all set to be launched on August 28, 2019. Renault plans to place the new Triber MPV, right in between the Kwid hatchback and the Duster SUV. The Renault Triber will be launched as India’s first modular vehicle to seat 7 in the cabin and the new MPV can be booked with a token amount of  INR 11,000 from August 17, 2019.  The production run of the Renault Triber has already begun and can be expected to hit the showroom by the first week of September. For a price-conscious market like India, the Triber might come as an MPV which is perfect for the of average Indian household. To further strengthen its appeal, Renault has loaded the MPV with a long list of features as well. Triber comes with a removable third row to generate 625 Litres of boot space.

To start with, the Triber will come with cooled cupholders, along with a host of storage spaces to hold up all the knick-knacks of the occupants and then some. There will also be a touch screen infotainment system withApple CarPlay and Android Auto on offer. The youth-centric MPV will come with as many as 100 different options to configure the seats. The highlight of the seating configuration is a removable third row seat, in order to generate a massive 625 liters of cargo carrying capacity in the boot while also accommodating 5 passengers in the first two rows. The reclining second row is also an added convenience for the second-row occupants in long journeys. 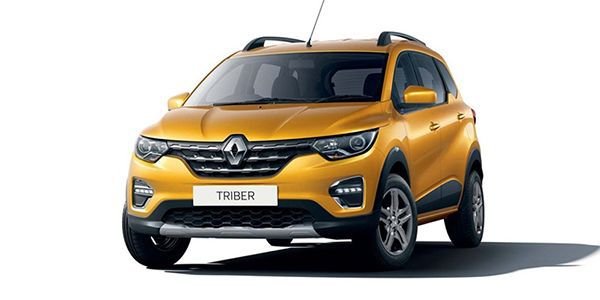 Other than the being loaded with safety systems, packed with features and adding three rows of seats to the mix, the Triber is a strong and stylish vehicle when it comes to its design. While Renault has cleverly designed the Triber to accommodate seven passengers and a 72bhp 1.0-litre 3-cylinder engine in just under 4 metres, the car comes with styling traits to match up with the current crop of Renault models. To complete the SUV-like design, it sports rugged matt black side cladding all around and also gets 182 mm of ground clearance. Along with this, elements like projector headlamps, LED-DRLs, roof-rails, skid plates, and alloy wheels give the Triber an upmarket appeal.

Designed on the Kwid’s low-cost CMF-A platform, the Triber will compete with other B-segment cars like the Maruti Suzuki Swift and Hyundai Grand i10. With an expected price tag of around INR 4.5 to 8 lakh, the Triber is expected to carve out a niche for itself in our market.