The production-spec Tata HBX will come as a solid contender to the likes of Maruti Ignis and Mahindra KUV100 in the B1 hatchback segment.

2020 is set to be a busy year for Tata Motors since the auto giant has been gearing up for a range of new car launches in India in the current calendar year. While the domestic-grown automaker has already introduced the facelift versions of its existing cars, it also launched the all-new Altroz premium hatchback just a month back. A seven-seat version of the Tata Harrier, the Gravitas, is also in the pipeline. However, Tata’s new product onslaught will not just stop here as reports suggest that the company is working on the production-spec version of the HBX concept that debuted at the Auto Expo 2020.

The Tata HBX concept which was showcased at Auto Expo 2020 will spawn a crossover-ish B1-segment hatchback for the Indian space. Following the all-new Tata Altroz, the production-ready Tata HBX will be based on the ALFA Arc platform and will sit below the Altroz in the company’s vehicles range. The Tata HBX will be the smallest car to be underpinned by the ALFA Arc. The production version of Tata HBX is expected to be launched during this festive season.

It is also reported that the production-spec model of Tata HBX will be 97% close to the model that it’s based on. That means the upcoming car will retain a highly-attractive crossover-inspired silhouette from the concept model. However, it is likely that the production model will miss out on the auxiliary lamps, roof rack and some impractical design elements as what we saw on the HBX concept. 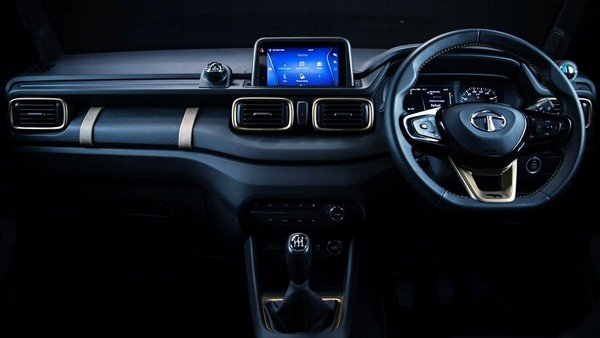 Tata HBX's interior will share a lot of things in common with that of Tata Altroz.

Interior-wise, the production version of Tata HBX will share plenty of cues with Tata Altroz’s cabin. It will more likely to share the instrument cluster, flat-bottom steering wheel, air-con panel and even the infotainment system with the premium hatchback sibling. The production model spawn by the HBX concept will rival the likes of Maruti Ignis and Mahindra KUV100.

What we’ve known about the HBX’s mechanical front is that it won’t come with both petrol and diesel engine options under the bonnet. The all-new hatch will make use of a 1.2-litre petrol burner making 86 PS of max power and 113 Nm of torque as singe engine on offer. Price of the production-spec Tata HBX is estimated in between Rs 4.5 – 8.5 Lakh (ex-showroom).