0 0
The home-grown auto manufacturer has decided to shelve the production of the Tata Safari Storme in the Indian auto market, which indicates that the SUV will be discontinued soon.

Tata’s authorized dealerships have been informed by the company of not receiving any new bookings for the Safari Storme. They are also told to make efforts to sell all the remaining stocks in the warehouses. Several dealerships have also been reported to have stopped offering test drives for the SUV. Tata has decided to shelve the production of the Safari Storme.

The Tata Safari Storme was first launched in India in 2012. The SUV did record a good sales number in the first stages but it soon loses its popularity with the Indian auto buyers and starts to become a favourite vehicle of the Indian army. In 2019, the average monthly sales number of the Safari Storme is just 100 units. Last month, only 165 units of the SUV managed to be sold, witnessing a 74.3% decrease compared with that in the same period last year.

The Tata Safari Storme is offered in three variants: EX, LX and VX. While the entry-level LX variant is only available with a 5-seater configuration, the EX and the VX can accommodate up to seven people. The SUV is equipped with a wide range of features including projector headlamps, heated outside rearview mirrors, a Harman-powered audio setup and a limited-slip differential, etc. As regards the powertrains, the Tata Safari Storme receives its power from two diesel motor options: a 2.2-litre four-cylinder DOHC Varicor which can deliver a maximum power of 156 PS against 320 Nm and is mated to a 5-speed MT unit and a VARICOR 400 with a power/torque figure of 156 PS/400 Nm and is coupled with 6-speed MT unit. The Varicor 400 is available with a shift-on-fly 4WD system. The claimed fuel mileage of the SUV is 14.1 kmpl. 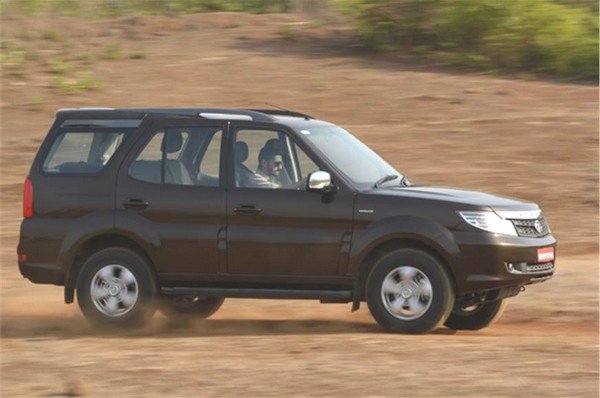 The Tata Safari Storme is priced in the range from INR 10.38 lakh to INR 15.50 lakh (ex-showroom, Delhi). At this price range, its main rival is the Mahindra Scorpio. Furthermore, it also competes some compact SUVs in the Indian auto market such as the Renault Captur, the Duster and the Hyundai Creta.