The Tata H2X Concept has made its official debut at the 2019 Geneva Motor Show. This shows that Tata Motors is developing a brand-new entry-level crossover. Its production model (codenamed as Tata 445X) has been imagined in a recent rendering.

Head of Design Department of Tata Motors, Pratap Bose has said that the production model of the H2X will resemble the concept in terms of the design by 80%. Based on the H2X concept model, the Tata X445, also known as the 'Tata Hornbill' has been imagined to feature a masculine design. To be more specific, the front looks striking and aggressive with a raised bonnet, a robust bumper, thick and heavy wheel arches, additional body cladding and straight lines. Moreover, the car also comes with headlamps which are positioned closely to each other, larger LED DRLs in the front. On the side profile, it comes with rear door handles which are integrated to the pillar, dual-spoke alloy wheels and roof which are finished in black for a sporty two-tone appearance. 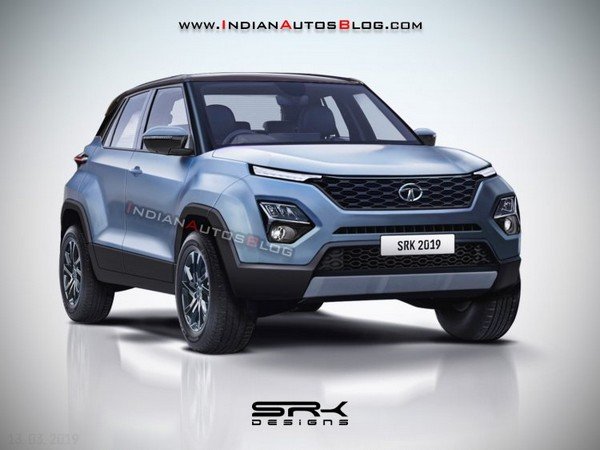 The Tata Hornbill has been rendered to feature a muscular appearance

In terms of the dimensions, sharing the Advanced Modular Platform with the Tata Altroz, the Tata Hornbill is expected to be a 3.8m long, 1.8m wide and 1.6m high with a 2.5m wheelbase.

The Tata Hornbill is expected to use a 1.2L naturally aspirated 3-cylinder petrol motor, which is borrowed from the Tata Altroz, as its power source. The transmission duties will be undertaken by a 5-speed MT gearbox and an optional 5-speed AMT unit. The 1.05L Revotorq diesel motor will be discontinued by March 2020 when the BS-VI emission standards take effect and this engine will be out of question. In a different case but the same fate, the 1.5L unit of the Nexon, despite properly adhering to the upcoming emission norms, will also be excluded from the motor options powering the Tata Hornbill, due to its too big size and high cost for a crossover. The production model of Tata Hornbill is projected to be officially debuted at the 2020 Delhi Auto Expo with its launch in the Indian auto market slated for 2020. The vehicle will be positioned between the Tata 45X and the Nexon. Once launched, it will be priced in the range of INR 6 lakh to INR 8 lakh and rival the Mahindra KUV100 and the Maruti Ignis.