Next-gen Ford EcoSport will come with a new exterior design along with extensive mechanical updates. Ahead of its debut, some details of the new EcoSport is unravelled.

Ford EcoSport was among the first venturers of sub-four-meter SUV space. At its early days, the EcoSport had accumulated a huge following and gained great trust from the Indian car buyers. However, with the growing of the segment and the entry of many fresh faces, the Ford Ecosport finds itself struggling to remain relevant in the market. It is dealing with severe competition from Maruti Vitara Brazz, Hyundai Venue, Tata Nexon and Mahindra XUV300. In a constantly growing and ever-changing segment like the sub-four-meter SUV space, the Ford Ecosport seems to fall behind with its ageing design and offering. Being aware of its shortcoming, Ford EcoSport is on the way to step up its game with a new-gen version coming up in the near future.

Currently, it is brought to our notice that Ford is working on the next-gen EcoSport. Some images of the Ford Ecosport from Brazil was revealed ahead of the official debut. Ford Ecosport will see a comprehensive interior and exterior updates

The images of the new Ford Ecosport shows an entirely new face of the SUV which wildly different from the existing model in our market. Ford has veered the design style of the EcoSport into a different direction. The next-gen Ford EcoSport resembles a crossover more than a straight-forward SUV like its current look. The shape of the car, hence, differs from the existing design with softer edges. As far as the front design goes, it is easy to point out the replacement of the old grille with a new black-out mesh unit. The headlight housings are reshaped as well. On the front face, the Ford Ecosport now sports a revised bumper with chrome element around the fog lights.

Coming to the rear end, the new-gen Ford EcoSport looks fresh and stylish with various updates. The new sleeker and thinner LED headlights would grasp our attention first. Besides, the Ford Ecosport gets a black-piano bar with illuminating EcoSport lettering which makes a bold statement about its new fashionable look. As to part with the SUV signature design, the rear window appears more sloping and lowered. A roof-mounted spoiler emphasizes the new flashy look. The rear bumper is also revamped as well. 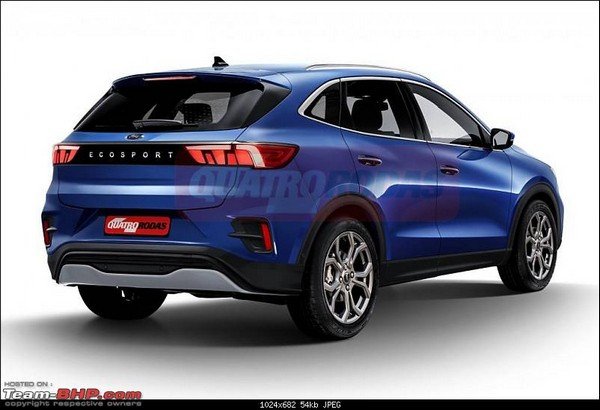 It is expected that when entering our market, Ford EcoSport will see some new updates. Given that Ford and Mahindra are currently joining hands in a partnership, India-spec Ford EcoSport is likely to share some similarities with the Mahindra XUV300 which is also one of the direct rivals of the EcoSport. Mahindra XUV300 is based on the Ssangyong Tivoli platform. If this platform makes its way to the new EcoSport, the EcoSport will definitely see a boost in interior space. Apart from this platform, Ford is likely to borrow 1.2-litre turbo petrol and a 1.5-litre turbo diesel engine which are powering the XUV300. Mahindra XUV300 is updating its engines to meet the upcoming emission regulation. For our market, next-gen Ford EcoSport is expected to go on sale in 2021 or 2022. To get the latest news, visit IndianAuto.com.