Since our Indian army has been using the Maruti Suzuki Gypsy for over a decade now, the Nation’s top security forces have decided to add some more vehicles to its lineup and here are some of the vehicles which are the new addition to the vehicles of the Indian troops. About a year ago, Tata Motors has brought up a piece of news that they were selected to supply 3,192 units of Safari Storme for the Indian army. This made-in-India car will replace the Maruti Suzuki Gypsy which is currently under service. The military spec vehicle will also continue to use same power plant with a 2.2L four-cylinder turbocharged diesel engine that transfers 154bhp of power and 400Nm of torque to the rear wheels. The army version of the Safari Storme uses the four-wheel drive with both low range and high range option along with a 6-speed manual gearbox.

The Safari Storme for the Indian army is completely painted in matte green and all the chrome parts are blacked out to reduce the reflections. The lamps are also blacked out in a purpose that the light travels in a horizontal plane that helps during the war situation. Other changes include a large hook at the rear to mount a trailer and a canister mount fitted on the rear fenders. The vehicle also gets a radio antenna fitted onto the bonnet. 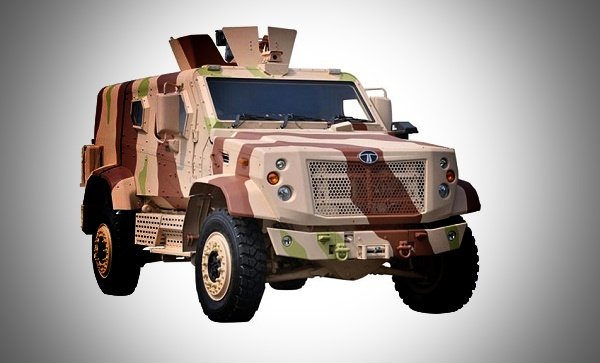 While the light-strike SUVs are currently built by the Force motors, Tata Motors has also been working on a similar platform for the higher ranks and also for the purpose of in-field mobility. But before the army acquiring these vehicles, they must go through a process of tenders.

The light-strike SUV which is being developed by the Indian brand will be built around the Tata Xenon platform that will also have a roof mounted turret that can mount an MMG with 7.62mm rounds or 40mm AGLs or ATGLs (Automatic Grenade Launchers) based on their usage and requirements. The SUV will also have STANAG 4569 rated bullet proofing which can take close-range automatic rifle fire or artillery fire from as close as 100 meters. This vehicle can also move on run-flat tires with an inflation system that allows re-inflation of tires from inside the cabin itself. While the Tata Safari Storme and Tata Light Strike SUV are completely on-road mobility vehicles, the Tata Defense Combat Wheeled Armored Amphibious Platform (WHAP) is capable of battling in both on-road and also in water. The amphibious propeller drive which is mounted on the body helps to assault the enemy troops by running through the water. This armoured vehicle can carry up to 12 personnel inside the cabin which is built rigidly strong and there is also a massive turret mounted on the roof. Despite the absence of windshield glass in the front, this assault vehicle is mounted with Day-Night crew assistance camera that shows up the opponent vehicles approaching. Independent suspension with hydropneumatic strut helps to move the vehicle comfortably without any effort on both paved and unpaved road surfaces. Although the major technical specifications of this amphibious vehicle aren’t released till now, the vehicle is just beautiful and blows up the eyes on the first sight. 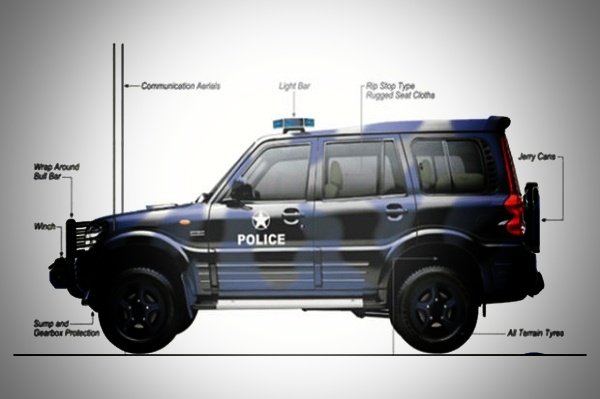 Similar to the one made by the Tata Motors for the Indian Army, Mahindra had also built a specifically modified Armored Scorpio for the purpose of on-road mobility of army personnel. This redesigned Scorpio is a mixture of both on-road Scorpio SUV and Scorpio getaway pick-up truck. The road going SUV’s roof has been replaced with the hardtop roof on the pick-up truck.  With Armor, the Scorpio gets high-level safety, which can take automatic rifle fire in its close range. Along with this, it is also mounted with a winch, that helps to toe repaired and damaged vehicles from the battlefield and an engine protector under the vehicle that safeguards the gearbox and oil sump. A communication antenna is mounted on the bonnet for wireless communication and a LED Lightbar is mounted on the top. The Scorpio also gets ballistic steel interior frame that provides overlap and backup protection for the doors and windows. When the 4x4 SUV meets ATV, then it results in Mahindra AXE

Axe is one of the lightest and simplest forms of light-strike vehicle made by the Indian automaker. The Axe derives its inspiration from the All-Terrain Vehicles (ATV) but the final output of the vehicle looks like the mixture of Mahindra Thar and Polaris ATV. The Axe is powered by a four-cylinder engine that is mated to a Mercedes-Benz transmission system which produces 140hp of power, making it an ideal option for reliable, quick reconnaissance and fast access to approach the battlefield. Mahindra & Mahindra also said that the Axe is a modern combat vehicle and can even be armoured to protect against automatic rifle fire depending on the requirements. When an SUV and Battle Tank combines, you’ll get such a wonderful combat vehicle and here is the example that Mahindra had made such a remarkable vehicle for the mobility of Indian Army in the form of Marksman APC (Armored Personnel Carrier). The APC is targeted for the personnel at the Border Protection and Riot Control. It has a Coppola machine gun mount with 270° traverse and protection. The combat machine is made for 4+2 that gets protection from the small firearms discharge from point blank range and also have underbelly protection for grenade attacks as well. The armoured passenger compartment gets protection against 5.56x45mm SS09 buckshot. This APC is available for the army personnel in two engine options, one is 2.6-litre CRDe that produces 115hp of power and 228Nm of torque and another most recent engine option of 2.2-litre CRDe power mill that generates 120hp of power and 280Nm of torque.