Hindustan Motor’s Ambassador is one of the most iconic cars of India and nobody needs an introduction to it. A muscle stance, vintage design, compact size, best-in-class build quality are the pinnacles of the Ambassador car that comes out when we speak about the model.

The HM Ambassador is powered by a 1800cc four-cylinder diesel engine that churns out 75PS of power and 130Nm of torque. Have you ever guessed how does it look when the most iconic car of the country is redesigned and customized? Can’t give it a guess, right? Cool. Here is one of the most uniquely customized HM Ambassador in both its aesthetic and mechanical aspects. 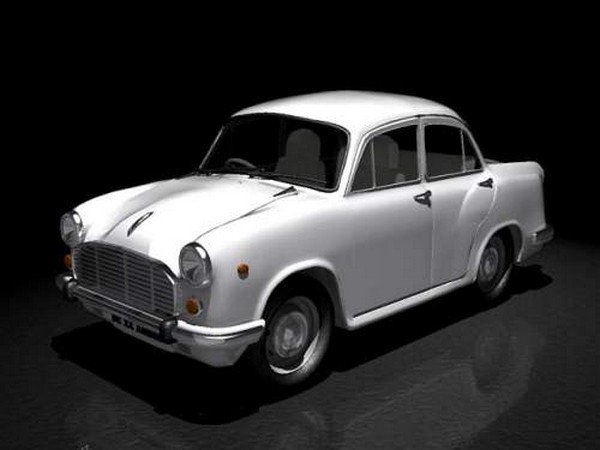 For those who don’t have any idea who DC is, his name is Dilip Chhabria and he is one of best automobile customizers in the world based out in Mumbai, India. Not only customizing the celebrated four wheelers but Dilip Chhabria also owns the largest design studio in India and at the same time, runs also a design school in Mumbai.

Unveiled at the Delhi Auto Expo on 10th January 2008, Ambierod (DC named it Ambierod) is one of the most beautiful designs made by DC until today. With its bold grille design and an elegant front face, lower ground clearance, squared front wheel arches, beautifully finished wheel rims and the bulged out rear fenders which cover half of the rear wheels, the Ambierod attracts everyone right from their first glance. The rear part of the vehicle is completely modified and gives a more classy look and the premium car feels like the one that made from the 21st century. Another thing which came as a surprise to everyone was, the car is equipped with gull-wing doors. 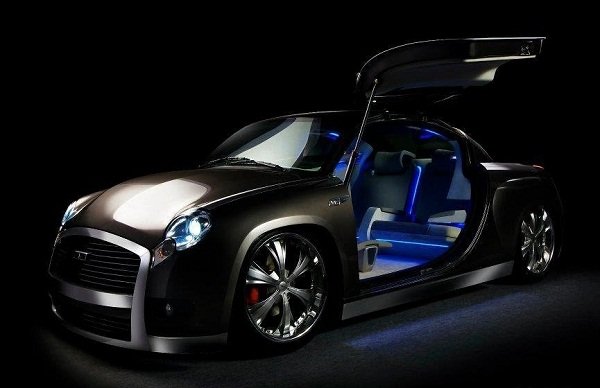 With its aesthetic retro look from the outside, the interior is completely different from the inside out. The car is equipped with an automated instrumental panel backed by a satellite navigation system and a rearview camera. There are three LCD televisions inside with internet and video conferencing facilities comes all together in a single package. To enlarge the comfort zone, the seats are completely retracted into a flat full sized bed. Along with these all features, the interior is also equipped with multi-colour mood lighting which keeps the ambience cooler. On the technical part, the Ambierod sits on a BMW Chassis and the stock power plant is replaced by a V12 engine underneath the elongated bonnet. Since this is in the concept stage, power figures aren’t released yet. Dilip Chhabria, himself claims that the Ambierod is derived from GM Holden’s stunning Hot-rod Ejify concept, revealed at the 2007 Australian Motor Show which bagged best concept car of the year. The Ambierod is a perfect confluence of luxury, technology and eye-catching design. It is still not entered into its production stage and it is expected to come around a cost of Rs. 4 Crore (USD $1 million) once it hits the production. Beautiful things always come with a hefty price tag, isn’t it? 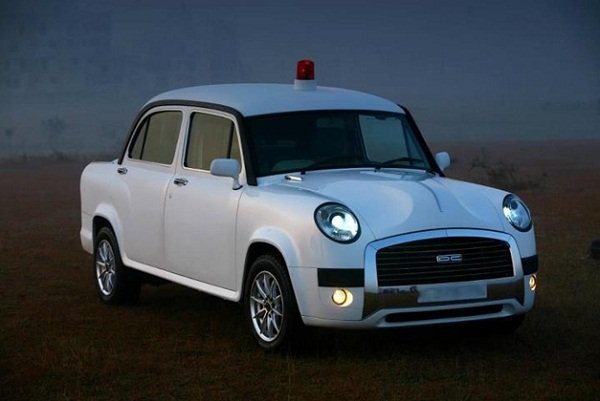 The VIPAmby is another impressive ambassador car in the list

DC and the team have made another design which looks more likely as the same original version and some makeover has been done on it which gives a more elegant look. The front part of the vehicle is completely new with a fresh bumper with round fog lamps and a little broader grill with a chrome outline goes over it. Headlamps have been replaced with a Volkswagen Beetle - inspired round shaped LED lamps up front which gives a premium feel to the classic legend. The stock rear lights also have been replaced with a LED units. DC has also added a Siren as an additional feature to the VIP Amby. 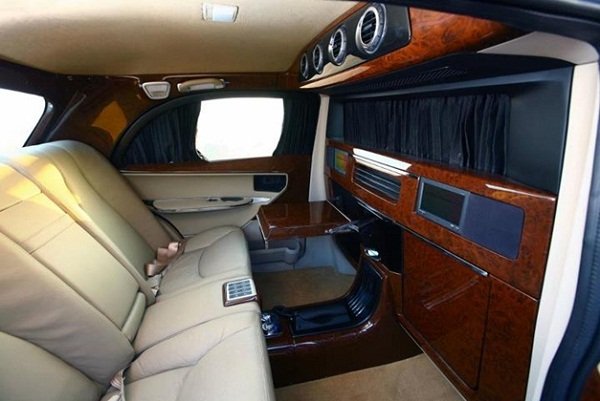 While the exterior gets a little makeover, the interior of the car gets a complete changeover which comes to life when we open the doors. Driver cabin is done with modified cushion seats with some wooden works on the dashboard. Rear occupants’ cabin is completely separated as a new portion with curtains falls on all the sides from the rear windows which gives the rear occupants to travel in their privacy with most of the interior is done with wooden works that add more luxury feel. The seats are made with premium leather with more cushion comes along with an armrest in the middle of the seat. AC vents are provided on top facing the occupants that give airflow directly to them. A small table unit for both the rear passengers helps them when they use a laptop or having some foods. Televisions on both sides are added as another luxury element.

The DC VIP Amby is a premium version of the legendary Hindustan Motor’s Ambassador and this one is mainly made focusing on the politicians from our country. Shibu Sunny John from Kerala had taken a huge step when customizing the HM Ambassador with replacing the last iteration of the engine with the old model Ambassador’s 2.0L. Also, the vehicle runs on 15’’ wheels with broad tires which adds a rugged look to this classic beauty. The stock headlamps are replaced with projector lamps with LED Daytime Running Lamps (DRLs). Interior of the vehicle did not go into re-treatment but the paint job has seen a completely new fresh look. Ceramic Pro from Calicut, Kerala has taken the Ambassador to look meaner than how it was. These looks have been given to the second generation 1969 model and the original paint is replaced with the shiny metallic green colour and the headlamps are replaced with the white halogen units and the indicators have also been given clear blinkers. Stock wheels have been replaced with multi-spoke alloy wheels. KitUp automotive customization from India had given the Ambassador a completely new look when it comes to visual appeal. To keep up the originality of the car, the team have just worked on the paint job and little interior works. The exterior gets a new black matte finish paint all over the body with the steel rims has painted in black. The chrome updates on the Ambassador are kept as it is and the dashboard and steering wheels are given a tan treatment. 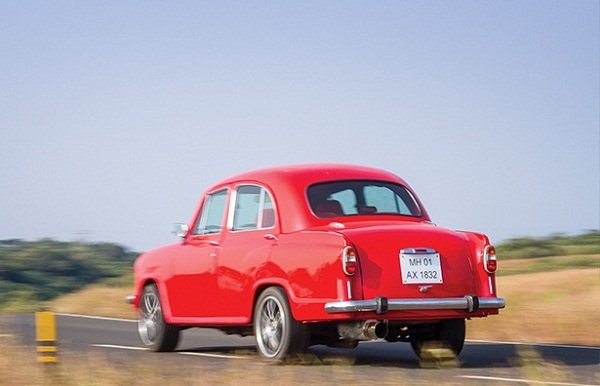 Motorsports, a customization company from Mumbai have taken the customization work seriously into the HM Ambassador. The visual treatment has been replaced with a bright red paint scheme all over the body. The chassis is made from 1994 Nissan Sylvia S13 which has been made to fit in the Ambassador’s body. The 1.8L diesel engine has been replaced with the 2.0L petrol engine with Garrett Turbo along the Nismo exhaust system. Both the suspensions have also been modified to meet the chassis requirements and the interior has also done with some stylized red makeover. 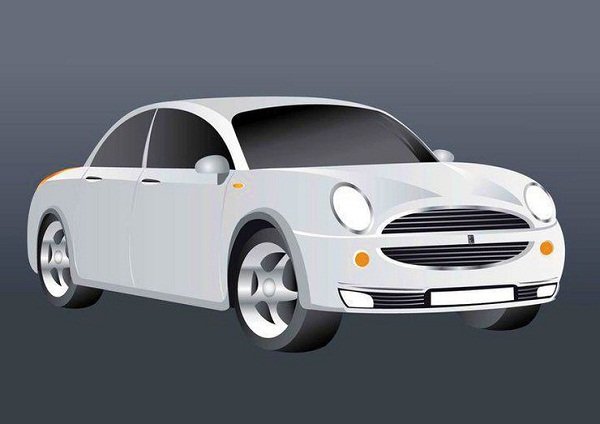 When it comes to the rendering of Automobile vehicles, SRK Designs stands out everywhere whether it’s a car or bike. As there are rumours we’re getting from the social media that the HM Ambassador will be made into production for the next time, SRK Designs have given a rendering concept image that how the new generation car looks like if they hit the market. The designs are almost inspired from Porsche 911 with its round headlamps and elongated broad bonnets and sports back tail design whereas the grill designs are inspired by Aston Martin. This is not the production version or the prototype but just a rendering image released by SRK Designs themselves.