63 0
Don’t you want to know the facts of Mr Bean’s car collection? Astounding truths are awaiting you in this article.

Celebrities’ world is full of interesting stories with interesting people, Rowan Atkinson is one of the most appealing individuals not only because he is a famous comedian known as Mr Bean and Johnny English, but he also popular for having a huge car collection which will blow any mind! His garage contains or contained a wide range of cars including the sporty McLaren, Lancia Thema, and Aston Martin.

There are a lot of rumours about his enormous collection among; some rumours are myths, but some are truths. This article about facts of Rowan Atkinson’s car collection will help you reveal the hidden truths behind the garage of this famous celebrity.

1. Mr Bean’s interest in cars is influenced by his father’s tractor and… lorries

Little did we know that his passion for cars may originate from a ride on his father’s tractor when he was young. Besides, in 1981, due to his fascination with lorries, he took a lorry driving license test and indeed successfully passed it. To prove his excellent driving skills, Rowan Atkinson decided to drive a car around the track in 1:42:02 time lap in an episode of Top Gear. No wonder why he isn't only a passionate car collector but also a skilful driver!

There is no denying that McLaren F1 is a beautiful car inside out. As one of the most prominent supercar, obviously, it possess an engine that is strong enough to beat any race, the V12. With the output of 627 hp, the V12 engine proves its impressive power added to the car. What’s more, you just need to give it 3.4 seconds and it will accelerate to 60 mph. And the most outstanding spec of the McLaren is that it can reach a maximum of 240.1 mph. And that is what makes a race car! How much do you know about Mr Bean's McLaren?

No matter what the most cherished things we have are, deep down in our heart, we want to treasure them as carefully as possible; and if there is anything accidentally happens to it and makes it broken, our hearts break. However, this may not be the case of the famous British comedian Rowan Atkinson as he crashed one of the most valuable cars in his collection, the McLaren F1, twice. You aren’t reading it wrong, TWICE! And that made Mr Bean’s insurance company have to pay a huge amount of money to repair the car.

According to Contact Music, it cost Mr Bean’s insurance company up to $1.4 million just to repair the broken precious car after the second accident in 2011. It costs such a fortune because the car is made of carbon fibre, one of the lightest, most resilient and expensive material of the automobile industry.

4. It took a year to fully repair the McLaren F1

Not only did it cost a lot of money but also a lot of time to fix the McLaren like new after crashing. Because of the expensive rare parts and the costly carbon fibre material, Contact Music made a deal to repair the car in a year. 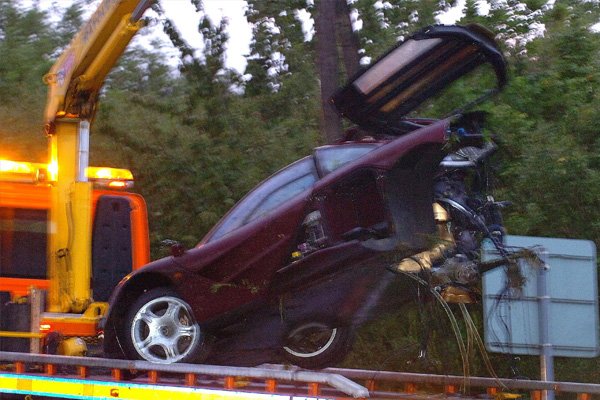 The McLaren F1 after a crash

5. Atkinson said goodbye with his McLaren for $10 million

After spending many years together, Rowan Atkinson and his beloved McLaren had to separate as he sold it at the price £8 million which is equivalent to $10 million nowadays. Both of them had been through a lot of good times and bad times including the 2 costly crashes. Hope that the latter owner of the McLaren will take good care of it.

6. The Engine of Atkinson’s Lancia Thema deprived of, perhaps, a Ferrari.

The Lancia Thema is perfectly designed inside out as it was reported by The Sun that the car’s interior is cover with gorgeous velour upholstery. The Lancia doesn’t not only have the appearance that is outstanding among cars but also owns the engine that boasts excellent performance. In fact, the Lancia Thema’s engine is the 32-valve motor that could be seen on one of the most famous sports cars, the Ferrari 328! 7. His Lancia Thema is a limited edition and there are only 20 of them founded in the United Kingdom

Another fact of the car collector, once again, relates to the well-known Lancia Thema. For most people, the rarest things are the most precious things and they won’t ever let them go. Nevertheless, that, at least, not what Atkinson thought as he sold one of 20 Lancia Themas in Silverstone Auctions.

8. Porsches are impressive, but you won’t find one in Atkinson’s car collection

There is a wide range of car brands that can catch the famous British comedian attention, but not Porsche, unluckily. Atkinson once replied to Bernice Crosby that although Porsches were wonderful, he never felt any interest with one. Poor the Porsches that cannot take a place in one of the greatest car collection.

9. Supercars? Rowan Atkinson owns a bunch of them including one of the rarest in the UK

Besides his long gone McLaren F1, Mr Bean also possesses a legendary supercar among the Aston Martin series. In case you didn’t know, Aston Martins were featured in the James Bond movies. Therefore, if they are well fitted with James Bond, they will be with Johnny English. Shear Comfort reported that the famous British comedian’s Aston Martin was a 1981 version. In addition, the Aston Martin is worth $180,000 and is one of the greatest supercars in the United Kingdom. What’s more, it can accelerate up to 60 mph in just 5.2 seconds; however, it cannot beat the acceleration time of the McLaren as mentioned at the beginning of this article.

No wonder that Rowan Atkinson has to prepare a large space to store all the cars. Millionaire's Sayings informed that he started to work on constructing a huge mansion in Oxfordshire to put all his cars in. The total cost was estimated at approximately $10 to 20 million. How rich Mr Bean is!