The powerful couple of the music industry is always at the top of any game they take part in, and it comes as no surprise that the cars they drive are also the best and the most expensive in the world.

Jay-Z and Beyonce are a long-time powerful couple in the music industry, and collectively they are worth more than a billion dollars. Being rich as well as constantly in the public’s eyes, you bet that they would take their car game to a totally different level. Truth to be told, Jay-Z actually had one of the most expensive cars in the world at the moment. So, find a cosy place, grab yourself a cup of tea, and find out the most dazzling cars in Jay-Z and Beyonce’s collection.

The fiery red Ferrari F430 Spider is one of the talented couple’s favourite cars, and it is not very difficult to fathom why. Honestly, who likes luxury cars does not love Ferrari? (except for Ferruccio Lamborghini of course). The car is powered by a 32-valve V8 engine that enables the car to reach 60 mph (approximately 96.6 kmph) from zero merely in 3.9 seconds and the top speed of the F430 Spider is 200 mph (approximately 321.9 kmph). Porsche 911 Carrera Cabriolet is literally one of a kind, as it is the only car that survived in production. Because of this, it is in the top 5 car of the 20th century. The car gets its power from a beast kind of engine that lets it accelerate to 60 mph (approximately 96.6 kmph) from zero in 4.1 seconds and to 100 mph (approximately 160.9 kmph) in just 9 seconds. With such a powerful engine, Jay-Z and Beyonce can enjoy the thrill of flying on the road in this Porsche 911. When two top luxury car manufacturers come together to create a car, you know it is going to be extraordinary. There were only around 2000 and 3000 Mercedes-Benz McLaren SLR cars, and the dominating couple of the music industry got a hold of one. This car is perhaps Queen B’s favourite vehicle as she is seen with it a lot of times, even to important events. The car gets its power from a 5.4-litre V8 engine that is mated to a 5-speed gearbox. Pagani Zonda F is a mid-engined sports car from Pagani that is the perfect combination of luxury and athleticism, and it is truly one robust sports car. The Pagani Zonda F is powered by a 7.3-litre V12 engine that can take the car speed up from zero 10 60 mph (approximately 96.6 kmph) in just 3.6 seconds. The top speed is 214 mph (approximately 344.4 kmph) and the Zonda F can take Jay-Z and Beyonce’s family to any location in no time at all. 1957 C1 Corvette may not be the fastest car in the possession of Jay-Z and Beyonce, but it is close to being the most iconic car. 1957 C1 Corvette was one of the first cars that the American automaker ever manufactured and it is absolutely legendary, so any car lover would kill to have one in their collection. The engine of the Corvette is the original 283 cu in Chevrolet small-block engine, so it may not be fast. But sitting in this car is definitely gives Jay-Z and Beyonce a special sense of comfort and pride because they have been seen on multiple occasions in classic. Series 2 Alfa Romeo Spider is another classic vintage car in their collection and Queen B’s couple sure love it. They brought it to Milan on their vacation and drove it to Lake Como. Despite being a car that was produced from the 1950s and the 1980s, it offers incredible neutral handling and a flexible drive. Rolls-Royce Silver Cloud Convertible I is not a car of speed, but it is totally a car of charm and elegance, which makes it a perfect fit for Beyonce. The sheer glamour of the vintage Rolls-Royce was probably the reason why Jay-Z got this car for Beyonce when she turned 25. The drophead coupe is embellished in blue leather and intricate embroidery and powered by a 6.2-litre engine that allows a top speed of 114 mph (183.5 kmph). Beyonce is rarely seen driving herself, but she has been detected taking the wheel of this pretty vintage cars a few times, and that is enough to prove how much she is keen on this Rolls-Royce. If Jay-Z gave Beyonce a 1-million-dollar car for her birthday, Queen B did the same. They sure are avid car fans!

For Jay-Z’s 41st birthday, Beyonce bought him a luxury Bugatti Veyron Grand Sport that costed her somewhere between USD 1.5 million to 2 million. The Bugatti Veyron Grand Sport has a turbo quad W16 engine, which lets the vehicle to get to 60 mph (approximately 96.6 kmph) in merely 2.6 seconds. This incredible sports car was awarded “Car of the Decade” and “Best Car” by Top Gear for 9 consecutive years. Beyonce did get her husband a top of the top car for sure. When you talk about family cars, you would normally think about a van or a sedan, but this is Jay-Z and Beyonce’s family we are talking about, so their family car has to be way above average. Mercedes-Benz Sprinter Limousine, the family car, is not just another luxury van. It has Direct TV, a USD 1,50,000 stereo system, a bathroom, and a shower. They could literally live in the Mercedes-Benz van. Jay-Z had already got a Maybach 62S in his collection, and clearly, that was not enough for him, so he bought another Maybach. The crown jewel of Beyonce and Jay-Z’s collective garage is definitely this badass Maybach Exelero. It costs him almost a holly-molly whopping amount of USD 8 million, which makes it one of the most expensive cars ever purchased. It has a 700 HP V12 twin turbo engine that allows the car to get from 0 to 60 mph (approximately 96.6 kmph) in 4.4 seconds. This car is so impressive that Jay-Z even featured it in his music video with rapper Kanye West. 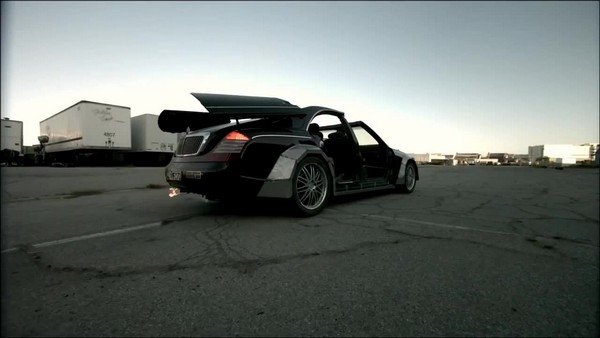