If you are setting out to buy a desirable automatic car with a tight budget, we recommend the 10 following attractive automatic cars with the most affordable price lists.

Over the years, automatic cars are growing in popularity in the Indian market. While the city traffic is causing some irritations to drivers day by day, the needs of more convenient and stress-free drives are in demand, to say the least. Various carmakers have acknowledged that and hence the number of automatic cars for sale in India is growing in quality and quantity or so. Sadly though, it is quite a challenge for the price-conscious buyers in India as cars with automatic transmission cars hardly ever come cheap, not only on the price stickers but also at the running costs. Fortunately, thanks to the enhancement in technology, the automakers have been finding multiple ways to keep the costs of automatic cars in India under check. Indianauto.com has now rounded up with the list of 10 cheapest automatic cars to buy in India, especially best AMT-equipped vehicles that you can buy without having to dig a hole in your pocket.

Given the rising hustle and bustle of the congested roads around the cities in India, small automatic cars turn out to have a definite competitive edge over the manual ones. Hyundai Motor is among the first automakers to sight this opportunity. The Hyundai Grand i10 Nios has registered exponential sales numbers in the Indian space. Even after the covid-19 lockdown, the Grand i10 Nios still enjoys great demand from the auto enthusiasts. The Grand i10 Nios is powered by three engine options, including a 1.2-litre Kappa petrol, a 1.2-litre U2 CRDi diesel and a 1.0-litre Turbo GDi petrol unit. While the two earlier engines are available with a 5-speed MT in addition to a Smart Auto AMT, the turbo-petrol mill can be had with just a 5-speed manual gearbox. Do note that Hyundai also offers the Grand i10 Nios with bi-fuel type with a 1.2-litre Bi-fuel Petrol+ CNG version.

Hyundai Grand i10 Nios Prices in Some Popular Cities

Needless to say, the Tata Tigor should be one of the cheapest sedans equipped with an automatic transmission in the Indian auto market. The sub-four-metre sedan received a BS6 update earlier this year, coming up with some major cosmetic changes, additional features and mechanical updates. The 2020 Tata Tigor comes with a BS6-compliant 1.2-litre 3-cylinder naturally-aspirated Revotron engine that churns out 86 PS of power and 114 Nm of peak torque. The AMT unit on the Tigor is on offer with the petrol-fueled variants only. This engine can be paired with either a 5-speed MT or a 5-speed AMT gearbox option.

The Maruti Ignis was first revealed to the public in the form of a concept model at the Auto Expo 2016 and then officially went on sale in 2017. In February 2020, Maruti Suzuki released the Ignis facelift with updated styling design, expanded list of features and updated engines under the bonnet. Intended as a premium crossover-like hatchback for the urban car enthusiasts, the Maruti Ignis seems a bit less attractive than its WagonR and Swift siblings, but still, it is good enough to carve out its name in the hatchback segment for quite some time. It’s worth noting that the Maruti Ignis sales have grown up significantly after the arrival of the facelifted model.

The Tata Tigor’s hatchback twin, Tata Tiago is also a popular model in the list of cheapest automatic cars in India. It is currently one of the best-selling Tata cars in the country. The icing on the cake of the Tiago should be at its attractive price point and the presence of an automatic transmission option. The Tata Tiago draws the power from a 1.2-litre 3-cylinder Revotron petrol burner pumping out 87 BHP of power and 114 Nm of max torque. Power is sent to the front wheels via a 5-speed automated manual transmission alongside a 5-speed manual transmission.

The next cheapest automatic car in India is the Maruti Wagon R which has just made a comeback in early 2019. In its latest avatar, the Wagon R manages to attract a huge band of fan-followers who keen on a typical tallboy hatch at a “tasty” price point. The base automatic WagonR variant employs the similar 1.0-litre K10 engine making 67 BHP of max power and 90 Nm of torque and comes coupled with a 5-speed automated manual (AGS) transmission. The automatic car of Maruti gets the price starting from Rs 5.46 lakh and ending at Rs 6.04 lakh (for the top-spec ZXI AMT variant), thereby making the Wagon R one of the best automatic cars under 6 lakhs in India.

Maruti Wagon R Prices in Some Popular Cities (by August 2020)

Hyundai re-launched the highly-acclaimed Santro hatchback in India in late 2018 to fulfil the expectations, aspirations and needs of the working-class buyers in the country. In a bid to eat a bigger piece of the pie in the market which has been immensely dominated by Maruti Suzuki cars, the Hyundai Santro comes back to the stage and manages to gain massive popularity right from the word go. And obviously, the budget-end Hyundai Santro is the next model in our list of cheapest automatic cars in India. 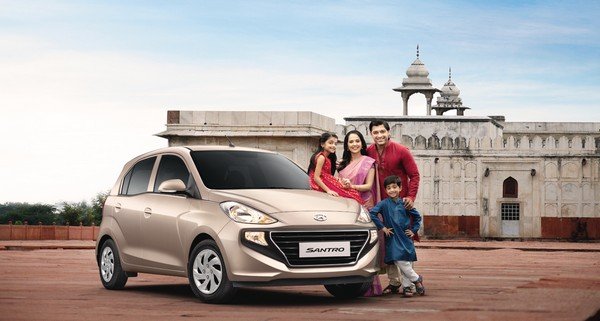 In April 2020, the BS6 Hyundai Santro was officially launched in the market with a 1.1-litre 4-cyl petrol engine that can belt out 68 BHP delivered at 5,500 rpm and 99 Nm of max torque at 4,500 rpm. It is going on sale with an automatic transmission which is a Smart Auto automated manual version. The base automatic variants of the Santro is Magna AMT model which is currently positioned at 5.52 Lakh while the highest-spec Santro Asta AMT is priced at Rs 6.25 Lakh (all prices, ex-showroom). At this price bracket, the Hyundai Santro is certainly a worthy automatic car under 7 lakhs in India.

Hyundai Santro Prices in Some Popular Cities (By August 2020)

The automatic car that deserves to be included in the list of cheapest automatic cars in India 2020 is another hatchback from Maruti Suzuki, the Celerio. Compared with the earlier cheap automatic cars, the Celerio looks pretty basic. The tallboy doesn’t have much of the fancy design elements but it doesn’t mean it is ugly. The Maruti automatic car looks proportional and well-sorted on the outside while its cabin is rather clean and practical indeed. The current Maruti Celerio is deriving the power from a 1.0-litre K10B petrol engine that is also available with CNG variant. In its petrol mode, the engine can put out 67 PS/ 90 Nm regarding the power and torque figures while those of the CNG version is rated at 59 PS/ 78 Nm of torque. When comparing the Celerio with the Wagon R, we can conclude that they are one on the mechanical front. And like the Wagon R, the Maruti Celerio is one of the best automatic cars under 6 lakhs to buy in India.

Maruti Celerio Prices in Some Popular Cities (by August 2020)

After a long period of waiting, the Datsun redi-GO has finally received an AMT version in its variants line-up. The little runabout is obviously the most affordable car in India that offers a 5-speed automated transmission. The Datsun redi-Go is powered by two engine options including a 1.0-litre petrol engine that produces a max power of 67 BHP and 91 Nm of torque along with a 799cc petrol engine that churns out 53.64 BHP and 72 Nm of torque. The AMT is available with the former version only. At the prices starting from Rs 4.8 lakh (for the automatic 1.0 T Option variant), the Datsun redi-Go is the third cheapest automatic cars to buy in India 2020.

Datsun redi-GO Prices in Some Popular Cities (By August 2020)

When the first Maruti S-Presso hit its showrooms in 2019, the all-new entry-level hatchback car from Maruti Suzuki has been going gaga over the Indian auto lovers. The S-Presso was based on Suzuki’s Heartect platform that offers the structural rigidity for the vehicle.
Under the hood of the Maruti S-Presso lies a 1.0-litre K10B petrol engine with CNG option, just like the earlier Maruti models. It can be had with either a 5-speed MT or an AGS automatic transmission.

Maruti S-Presso Prices in Some Popular Cities (by August 2020)

The list of cheapest automatic cars can’t see the absence of Renault Kwid, which is one of the best-selling entry-level hatchbacks in the country. Being a handsome-looking hatchback designed in line with the inspiration of a crossover, the Renault Kwid comes in a choice of an automatic option with a very attractive price tags. The Renault Kwid is powered by two powertrain options, but the automatic gearbox is only on offer with the heftier 1.0-litre petrol unit. This three-pot petrol mill can produce a maximum power of 68 PS and a peak torque of 91 Nm and gets an option of a rotary dial knob control for the transmission. In the 2020 version, the Renault Kwid comes with a suite of comfort features including an 8.0-inch touchscreen MediaNAV Evolution, a class-leading LED digital instrument cluster, speed-dependent volume control among others. Standard safety features of the Renault Kwid include dual airbags, ABS, EBD, driver & co-driver seatbelt reminder, high-speed alert and many other optional fitments.

Renault Kwid Prices in Some Popular Cities (By August 2020)

How to maintain your automatic transmission

In addition to this topic, we also want to discuss about automatic car maintenance. It is certain that the automatic transmission is one of the most complex parts of your car. This part will cost you a bunch of money to fix when a problem comes up. So you might need to know when do you need to check your automatic transmission. Let's swift through the below list:

- Grinding or vibration when in gear

- Lack of response while in gear

- Unusual noises while in neutral