One thing that many Indian celebrities have in common is their special affinity for extremely luxurious cars, especially Rolls-Royce models, and they definitely do not shy away from flashing their expensive four-wheelers when they are out and about.

Indian celebrities lead the lives that are not very different from those of king and queen. Well, it is not very difficult to understand why as they make loads of money each year. And when you are rich, it is natural that you would want to indulge in the finest things in life. Indeed, the celebrities in our country love themselves the epitome of luxury when it comes to cars, and as long as they can purchase one, they would get themselves an opulent and elegant Rolls-Royce.

Let’s check out top 5 Rolls-Royce cars Indian celebrities own and comment down below which one you think is the fairest of them all. Also, let us know if you are rich, would you love to drive a timeless and sophisticated Rolls-Royce or are you more of a speed-loving  Lamborghini kind of guy?

Akshay Kumar is reportedly one of the highest paid actors in Bollywood. He is highly praised for his incredible acting skills that have been shown in multiple vastly different roles. Besides his acting career, people also know him as a man who has great taste in car, and surely, he has a garage full of super stylish, luxurious, and high-class four-wheelers. From Porsche Cayenne to Bentley Continental Flying Spur, he has all the classics. And as a man who has an eye for great luxury cars, of course, he would have a Rolls-Royce in his collection, and his is a Rolls-Royce Phantom. While Rolls-Royce is well-loved by many Bollywood superstars, Akshay is one of the few people who actually own one. The reason is simple: a Rolls-Royce Phantom costs around Rs. 3.54 crore (ex-showroom), and it is quite an over-the-top price that not a lot can afford.

Akshay Kumar’s car is a 7th generation Rolls-Royce Phantom that draws power from a 6.8-litre V12 engine mated to a six-speed manual transmission. 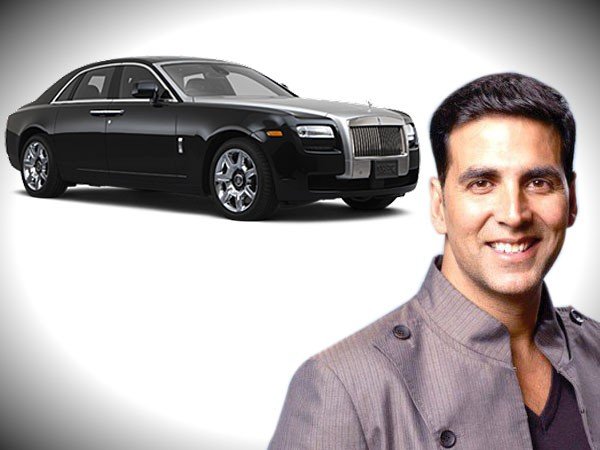 Priyanka Chopra spends most of her time in the United States now because of work and family, but whenever she comes back to India, a special Rolls-Royce Ghost is always there waiting for her. Truth to be told, Priyanka is the first actress in Bollywood to purchase and own a luxurious Rolls-Royce vehicle, among many other firsts like the first Indian actress to have a successful career in Hollywood.

A few years ago, she got herself a customised Rolls-Royce Ghost, which allegedly  has an incredible sound system. The car is powered by a 6.6-litre twin-turbo V12 engine that generates 563 horsepower, paired with an 8-speed transmission system. It has a 0 - 62 mph (0 - 100 km/h) acceleration time of 4.7 seconds.

Priyanka had to pay more than Rs. 4.5 crore for this Rolls-Royce Ghost, and it seems to worth every penny as the comfort, ride quality, and status that it gives are almost unrivalled. Hrithik Roshan, as known as the “Greek God” of Bollywood, also got himself a Rolls-Royce Ghost, just like Priyanka Chopra. However, one of the special things about his Rolls-Royce is that the car was Hrithik’s 42nd birthday present to himself, and he did go a little bit crazy on this car.

The Bollywood actor purchased a Rolls-Royce Ghost Series II model as a birthday gift to himself, and while the ex-showroom price of the car is Rs. 5.65 crore, rumour has it that he actually paid more than Rs. 7 crore because of the sheer number of customisations that he demanded.

Because there is no official information about whether Hrithik had any special modification to the engine, we do not know for sure how his car performs. However, a normal Rolls-Royce Ghost Series II model draws power from a 6.6-litre twin turbo V12 engine that generates 563 Bhp-780 Nm. It can also accelerate to 62 mph (100 km/h) from zero in 4.9 seconds. Amitabh Bachchan, a Bollywood superstar who is frequently referred to as “Big B”, is crazy rich. In case you are not aware (if you are not, where have you been living?), last year, Amitabh Bachchan paid off loans of 1398 farmers from Uttar Pradesh, which amounted to over Rs. 4.05 crore. He is so wealthy that he even purchased a private jet plane. Therefore, when you hear that Amitabh Bachchan has a Rolls-Royce in his garage among many other extravagant cars like Bentley Continental GT and a fleet of Mercedes-Benz, you may not be very surprised.

Big B never shies away from flashing his enormous fortune and grandeur, but interestingly, the multi-crore Rolls-Royce that he owns was not purchased by himself. In 2013, director Vidhu Vinod Chopra wanted to show his gratitude to Amitabh for his spectacular performance in “Eklavya” that contributed to the massive success of the movie, so the director gave Big B a 7th generation Rolls-Royce Phantom. You may have seen many thank-you presents, but we bet you have not seen many presents that has a hefty price tag of Rs. 3.5 crore. Yohan Poonawalla is the only person who is not a Bollywood actor or actress in this list, but he is very famous and he does have a drool-worthy car collection, so it is only fair to include him and his outrageous Rolls-Royce cars. Yes, you read it right - cars!

Yohan Poonawalla is one of the most affluent people in the country, and he is a true car enthusiast. Mercedes-Benz, Bentley, Lamborghini, Ferrari, Porsche, Rolls-Royce - you name it, and he is likely to have multiple cars of that maker in his garage. In fact, if we only take cars from the British luxury automaker, Rolls-Royce, into consideration, he owns 8 (!) and 6 of them are vintage Rolls-Royce. Besides owning multiple stud farms, it seems like he loves to possess car farms too. Yohan Poonawalla owns a fleet of Rolls-Royce, many of which are vintage cars