The third-gen Maruti Swift was launched last year. Let's see the best-modified version of this model so far.

In India, Maruti Swift is a people’s hatchback. Over more than a decade, the car has been the number one choice for the first time buyers who want to start with a small, budget-friendly hatchback for convenient travelling. More than just a familiar family car, the Swift is also a favourite subject for car customizers. There is an uncountable number of modified Swifts in our country, ranging from mild-modified projects to the most insane and exotic ones.

The current Swift for India, which is the third-generation model, was introduced last year. At launch, the third-gen Swift, just like any previous models, was warmly welcomed by the customers. Within just one year, modified versions of this car have started to a regular sight. The following modified Maruti Swift, however, must be one of the best customized third-gen models we've seen so far. Here is a video by GOKZ Motography that shows the custom car in its glory.

The exterior is mildly modified with a sporty aftermarket styling kit. The car takes design inspiration from the Suzuki Swift Sport which is available in the international market. On the front end, this Swift gets an aftermarket bumper with lip spoiler as well as new LED DRL headlights. Besides, it also features a slightly revised grille and fog lamp housings. 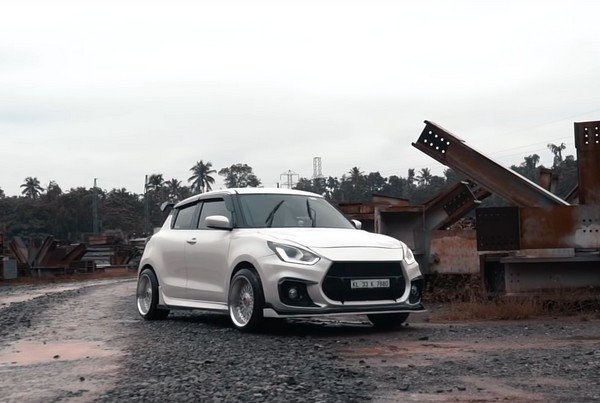 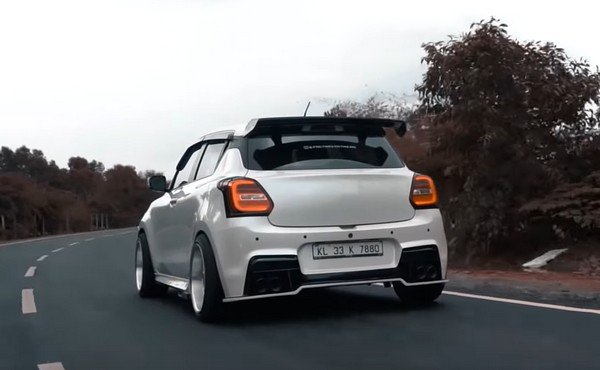 While the stock version looks elegant and sports extensive application of chrome throughout the exterior, on this modified version, all the chrome inserts are reduced. Besides, this Swift now sits on aftermarket alloy wheels with low profile tyres. On the side profile, the Swift also sports aftermarket body skirt. The rear end is highlighted by the extra-large roof-mounted spoiler, which adds a touch of sportiness to the design. It also gets an aftermarket bumper with black inserts. It is clearly the best looking modified third-gen Maruti Swift at the moment.

On the mechanical terms, the Maruti Swift now uses an air suspension system, a feature usually seen on luxury cars. With this system, the air suspension could provide a better ride quality for the vehicle.