An escape drill of a VIP fleet of vehicles including the well-maintained old Hindustan Ambassadors has been demonstrated by the Central Industrial Security Force (CISF).

Firstly, let’s have a look at the whole demonstration. Please focus from 1:23:36 till the end of the video since the main part of the rescue is in this time period.

The marching was displayed to the public with the attendance of the government officials at the 50th Raising Day of CISF. We can see in the video that the newly appointed CISF staff, most of whom are at the sub-inspector rank, displayed their skills in different practices. One of the most impressive drills is the rescue performance implemented by the professional CISF personnel in an attack on a group of VIP Hindustan Ambassadors.

In the beginning, three Hindustan Ambassadors move in a pre-set position in a direction towards a public meeting. After that, when the vehicle almost reaches the destination, the Personel Security Officers (PSO) got out of the  Hindustan Ambassador to get a glimpse of the surroundings. Then they walked beside the middle vehicle in the fleet which is housing the VIP. Two more officers do the same and join the mission of protecting the VIP vehicle. All the four staff, who are walking at a fast speed while repeatedly examining the surroundings, seem to form a protecting circle for the VIP car. As indicated by the video, during the march, the VIP can be endangered from the nearby skyscrapers. Numerous assassination attempts have been recorded to be made during this procedure. After the three Ambassadors reach the destination, the CISF staff watch out for threats from the surrounding areas. Another official approaches the VIP car to create a barrier which prevents attacks. When the VIP steps onto the stage, the CISF officials again create a 360-degree protection circle around him while the Ambassadors are assembled to be quickly removed in the case of an attack.

In the middle of the demonstration, the VIP gets attacked; immediately, the CISF create a circle to protect the VIP and quickly walked to the fleet. As the vehicle starts running, a soldier still remains outside to provide a cover and then rapidly jumped through the rear window to enter the vehicle.

In the video, we can also see a bomb attack, which requires the Ambassadors to stop and take a U-turn by adopting the J-Turn move. This means that they need to drive the vehicle at a very high speed in reverse gear and flick the driving wheel, which helps the vehicle take a U–turn in only a short time. Then the Tata Indigo sedans driven by the attackers continue to chase after the fleet of the Ambassadors. The sweeping car decreases the speed and participates in a gun battle with the attackers. A Quick Reaction Team (QRT) also approached the fleet. Eventually, the CISF officials in two Mahindra Boleros successfully prevent the attackers using tactics and force. 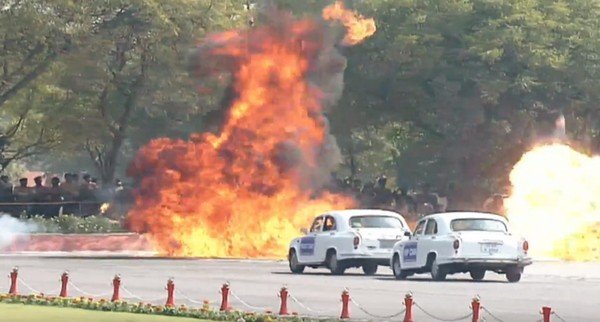 Another situation in which a bus gets kidnapped by the terrorists is also shown in the video. In this situation, the CISF employees also use tactics and skills to retain the control of the bus.

In another situation, the CISF also applies their tactics and skills to regain the control of a hijacked bus

CISF is in charge of securing Indian major sectors consisting of nuclear and atomic plants. They also protect Delhi metro and some major airports. Moreover, they also supply protection for private firms and individuals provided that they are paid a certain fee. At present, many private companies such as Infosys Bangalore, Reliance refinery in Jamnagar, Infosys Bangalore and Pune Campuses have hired CISF for protection. Even the Ambani family has hired CISF for protection in 2013 and is often seen with a Ford Endeavour or Range Rover, by which the CISF travel to secure the whole family.