Below is a video which shows a drag race between a Lange Rover Discovery and a Toyota Fortuner. Read on to see which one is the winner!

Toyota Fortuner is a very popular SUV in the Indian auto market, especially in Tier-II and Tier-III cities, thanks to its robust appearance, powerful oil burner and large dimensions, which make it an all-round SUV. There are many reasons for the customers to choose this SUV: its comfortable cabin, reliability or off-roading capabilities. Another car which is also famous for its rugged look and off-road capabilities is the Land Rover Discovery, which is far more expensive than the Fortuner. One might wonder if these two cars participate in a drag race, which one will be the winner. Below is a video which shows a drag race between the Range Rover Discovery and the Toyota Fortuner. Firstly, please have a look at the video.

In the first race, the Fortuner is seen to take and hold an initial lead. Towards the end, the Discovery succeeds in overtaking the competitor by several inches. In the second race, the Toyota Fortuner manages to take the lead again and hold on to it till the very end. This time, the Land Rover Discovery is overtaken by a far distance. Nevertheless, the driver of the Discovery might have forgotten to put the pedal to the metal. 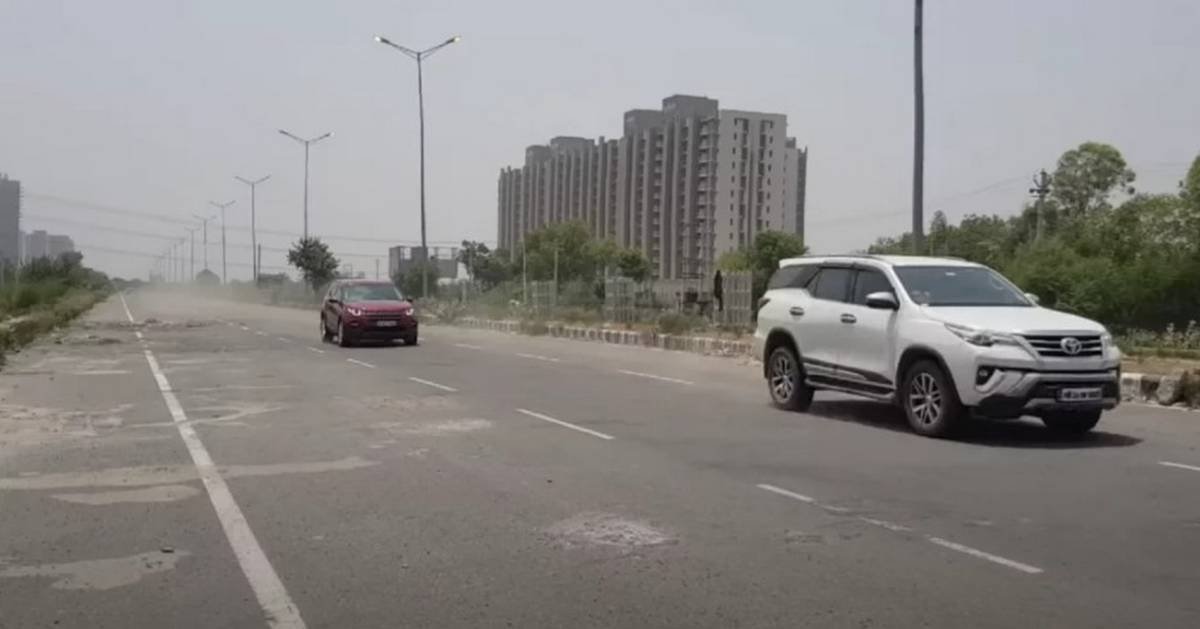 The Toyota Fortuner manages to take the lead in both of the two races.

Being a premium SUV, the Toyota Fortuner is packed with a wide range of features like LED projector headlights with LED DRLs, LED fog lights, powered and foldable ORVMs. The interior feature list of the SUV includes a power-adjustable driver seat, autocruise, start/stop push button and an automatic air conditioner. In terms of safety, the Fortuner is equipped with seven airbags, ABS with EBD, hill-hold control, vehicle stability control with brake assist. The Toyota Fortuner receives its power from a 2.8-litre 4-cyl turbo diesel which can generate 177 PS against 420 Nm and is mated to a 6-speed MT while the automatic version of the engine can produce an additional torque of 30 Nm. Furthermore, a 2.7-litre 4-cyl petrol variant also serves as a power source for the SUV with 166 PS against 245 Nm and a 5-speed MT/AT. While the petrol version comes with a 2WD system, the diesel comes with both 2WD and 4WD options. The price range for the Toyota Fortuner is from INR 28.66 to INR 36.88 lakh (ex-showroom, New Delhi).

Priced in a much higher range, INR 75.59 lakh - INR 87.99 lakh (ex-showroom, New Delhi), the Land Rover Discovery offers far more top-notch features than its competitor. Specifically, the SUV is equipped with LED headlights with auto high beam assist, 21-inch 10-spoke alloy rims, an electric sunroof, rain-sensing windscreen wipers. In terms of the interior, the features include a heads-up display, a 14-speaker Meridian sound system, four-zone climate control, 8.0-inch rear-seat entertainment as well as heated steering wheel and seats. The SUV is powered by three motors: a 3,0-litre 6-cyl Si6 gasoline burner with 340 PS against 450 Nm, a 3.0-litre 6-cyl TDV6 oil burner with 258 PS against 600 Nm and a 2.0-litre Ignenium unit with 240 PS against 500 Nm. An 8-speed AT and a 4WD are standard across all the variants of the SUV. While the Land Rover Discovery is absolutely more sophisticated and well-equipped, the Toyota Fortuner is very well-known for its unequalled reliability.