This super-cool modified Maruti Swift has a sporty look due to the custom scissor doors. It also has Accuair suspension, aftermarket lights and so on.

In a world where car modification is something that is fast gaining popularity, the Maruti Suzuki Swift is among the most popular and favourite models among the tuners. We have seen many custom Swift models hitting on the roads but this modified Maruti Swift from Kerala actually looks ultra-hot with its Lamborghini-like scissor doors.

The modified Maruti Swift shows up in sporty skirts on its front, side, and rear. It also gets aftermarket projector headlamps with integrated LED daytime running lights. The stock wheels have made room for a set of 18-inch 6-spoke wheel arches with lower profile tyres which contribute largely to the sharper side angle. At the rear-end, the freshened up bumper accommodates a set of redesigned LED tail lamps, new diffuser and a big spoiler. Together, these offer a bold and distinct look. The custom hatchback comes draped in a bright shade of red.

This aggressive red colour scheme is also adopted inside the plush cabin and the original three-spoke steering wheel has been taken over by a sportier wood-finished unit. The contrasting red-black colour combination of the car’s upholstery looks nice and also the original music system has been changed to a premium JBL audio system. 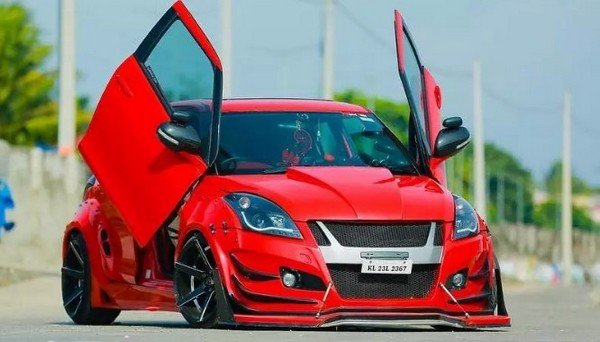 This should be the most badass customised Swift in India.

Of course, the most dramatic modification is courtesy of the replacement of the regular doors with the Lamborghini-like scissor doors, which give the car a unique and a very sporty look. The new Accuair air suspension is another major modification, whereas the twin exhaust pipes and the lower ride height are some other mods that this car carries. Some powertrain upgrades may have been done under the car's bonnet for performance gains.

In the stock Maruti Swift, Maruti equips the hatchback with both petrol and diesel options. The 1.2-litre K-series gasoline engine produces 83 PS of peak power and 113 Nm of peak torque while the 1.3-litre oil burner puts out 75 PS and 190 Nm torque. Transmission choices include a standard 5-speed manual version and an optional AMT unit. The total expense of changes carried by this modified Maruti Swift is not known at the moment.

Be updated with more interesting car stories by visiting our website - IndianAuto.com