We know the Renault Triber, the only sub-four-metre MPV in India. We know the Baleno, a popular premium hatchback offered by the India’s largest car major. Now we compare the new Triber against the Maruti Baleno to see how these cars fare against each other in the competition.

The Indian auto market is a challenging one and various automakers in India have been making great effort to carve a niche for themselves in the space. Renault India also gets no exception. The French manufacturer is contemplating creating an all-new “India-only” segment by the introduction of the Renault Triber – a seven-seater MPV with the length under the four metres mark that will compete against other sub-four-metre vehicles in India. From its launch, the Renault Triber turns out to be a brand new recipe for success. Thanks to the great number of features and unlimited utility it was offering at a competitive price point, the Renault Triber rapidly outsold the popular Kwid to become the best-selling Renault car in India. Meanwhile, Maruti Baleno has set a firm position in the premium hatchback segment for quite some time. Being one of the huge success stories of the Indo-Japanese company, the Baleno is complimented for its high-end features, next-gen Smart Hybrid tech and attractive pricing range.

2. Maruti Baleno Vs Renault Triber Dimensions: Which is bigger?

Though being a sub-four-metre MPV, Renault Triber seems bigger than Baleno counterpart by quite a margin. The forthcoming Renault Triber has been a talk of the town for its strikingly compact size in the form of a seven-seater people mover. That said, with the Triber, Renault has led the ways to open a first-ever “India-only” segment in our country.

The MPV measures the length of 3,990 mm, the width of 1,739 mm and the height of 1,643 mm along with the wheelbase of 2,636 mm, which slots it into the sub-four-metre vehicle department. Note that despite the compact dimension, the Triber is still good enough to accommodate the maximum 7 people and offers many features and a good amount of space on the inside. 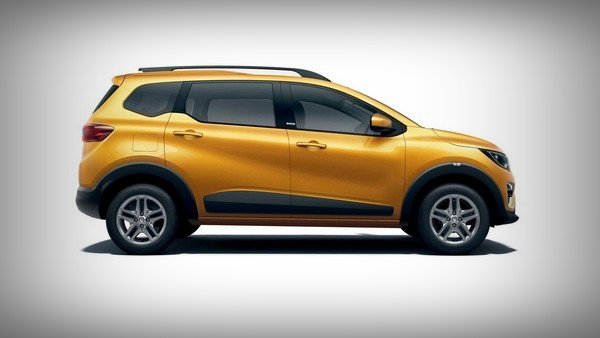 On the other hand, the Maruti Baleno comes to measures 3,995 mm in length, 1,745 mm in width, 1,510 mm in height and a wheelbase of 2,520 mm. With these figures, the Baleno is marginally longer and wider than its Triber counterpart but is inferior to the MPV in terms of height and wheelbase. It is also worth noting that the Maruti Baleno is only available in the 5-seater version while the Triber comes with 7-seater configuration. 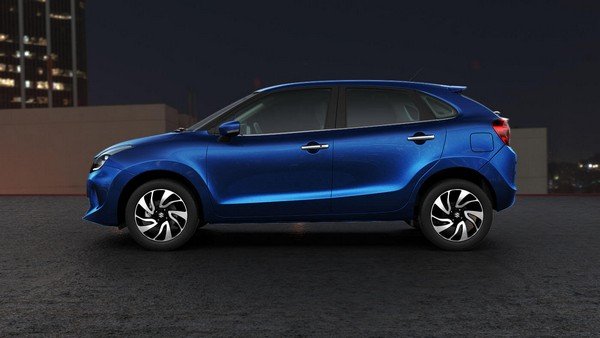 While the current-gen Baleno offers quite a decent boot space of 339 litres for a hatchback, the Renault new car looks better with 625 litres of the luggage bay (for 5-seater layout).

3. Maruti Baleno Vs Renault Triber Design: Which is better looking? The Renault Triber is an attractive car – from the ultra-modular architecture to its spacious cabin. It’s really magical. With its “modest size”, the seven-seater still manages to offer quite an ample interior space but not at the expense of its cosmetic beauty. The new Triber boasts an original handsome-looking attractive appearance that takes massive inspiration from a crossover. Based on the Kwid’s CMF-A platform, the Renault Triber bears a huge resemblance to the Renault Kwid. The crossover-like MPV combines the dynamism and sportiness on the outside, thanks to the presence of upright stance, taut lines, roof rails, sculpted bonnet, prominent radiator front grille, sweptback headlights, C-shaped taillamps, skid plates among others. On the other hand, the Maruti Baleno makes its presence felt even better with its new aggressive exterior in early 2019, stunning the two-tone precision-cut alloy wheels, bold new front grille with 3D graphic design, redesigned aggressive front bumper, stylish LED projector headlights with LED DRLs, distinct fog lamps that take the design of the premium hatch to a higher level over the old one. 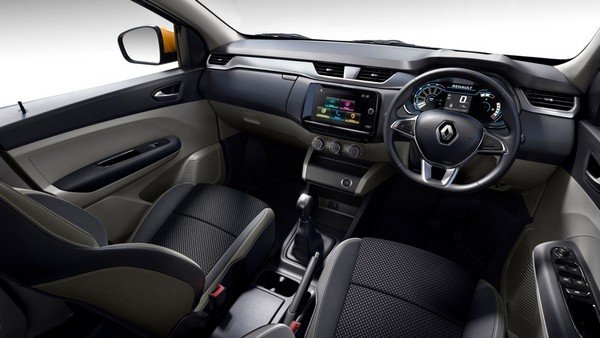 Once you’ve stepped inside the Renault model, you’ll notice its interior is rather classy and sophisticated. The upmarket feel is blown all around the corners while the dual-tone interior theme just adds more to the premium quotient of the Triber’s cabin. The dashboard layout of the car is somehow neat and tidy that reminds us of the German-ness design language. The large touchscreen stands out on the dash while the pizza slice-like tachometer looks interesting on its way. The flat-bottom steering looks nice enough with chrome Renault logo. Renault has cleverly placed the middle row’s air-con in the B-pillars while the third-row vents are tucked on the roof. 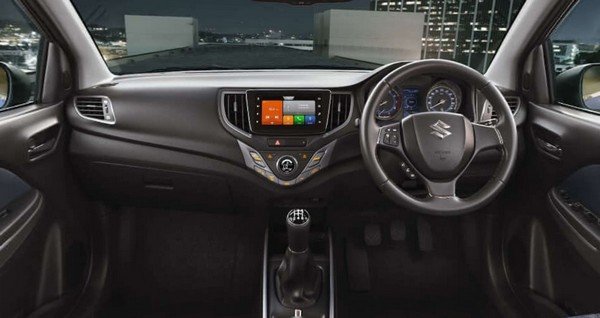 When compared to the interior of the French rival, the Maruti Baleno’s cabin is no way inferior regarding its premium and sportiness. You can easily sport the texture fabric seats which get a new two-tone black and blue design once you’ve got inside. The black dashboard of the Baleno looks nice and chunky while the grey bits on the centre console rolls out excellent cosmetic effects. The floating infotainment touchscreen is placed at the centre of the dash and flanked by two vertical centre AC vents. The physical buttons are neatly-designed and placed right below the touchscreen for more convenient usage.

It is said that the Renault Triber is going to play the space card and it’s true. The icing on the cake of the Triber’s cabin is beyond doubts its spaciousness. As said earlier, the French manufacturer really excels in liberating a fairly good amount of space on the inside within its sub-4-metre footprint. It offers ample headroom and legroom at the second row and third row of seats which are quite flexible with sliding functionalities. For any who are aspiring a compact car yet spacious on the inside, the Renault Triber should be the one of interest. Whereas the Maruti hatchback looks better with ample space at the front. The rear passengers also receive a good amount of roominess, especially for the knee. However, I have to say that the Triber is more impressive with its awesome space in a car that seats seven.

In terms of boot capacity, the Baleno looks inferior to the Triber also. We can’t deny that the Baleno serves us very well with quite a generous boot compared to other rivals in the segment of hatchbacks. However, when it comes to the comparison with the Triber, the Baleno is in an eclipse. The Triber offers up to 625 litres of boot space without having the third row of seats in the position that is far better than the Baleno’s 339-litre boot lid. With the easy-fixed seats, the Triber offers a lot of space to pack a whole bunch of luggage at the back. That is to say, the Renault Triber turns out to offer higher practicality as compared to the Baleno rival. It should be the perfect car for your road trips with a bunch of suitcases at the rear. 4. Maruti Baleno Vs Renault Triber Features: Which is safer and more convenient?

Practicality wise, the Maruti Baleno is known to be very feature-rich. The car comes packed with a 7.0-inch SmartPlay Studio infotainment system which is also found in the newly-launched new-gen Wagon R as well. The system brings in Android Auto and Apple CarPlay compatibility, in-built navigation, voice recognition and doubles up as the reverse camera display. Other interior features of the new Baleno include tilt and telescopic steering, anti-pinch window, various bottle holder, armrest, UV-cut class, etc.

In a meantime, the Renault Triber really scores big with a bigger 8.0-inch touchscreen infotainment system featuring Apple CarPlay, Android Auto and a slew of features, a 3.5-inch LCD display for the instrument cluster, a number of storage spaces, big glove box, AC vents even for the third row, charging sockets, etc.

When talking about the safety, the Maruti Baleno is equipped with dual front airbags, ABS with EBD, ISOFIX child seat mounts, seatbelt pre-tensioner with force limiters, pedestrian protection compliance, reverse parking sensors, high-speed alert and so on. The Renault Triber, on the other hand, is available with dual front airbags, ABS, rear parking sensors, speed warning system as standard options while the higher trims of the model get two more airbags and a reverse camera. That said, the Maruti Baleno seems to tower over the Triber in this part of the competition.

It turns out that Maruti Suzuki Baleno totally knocks out the Triber counterpart with attractive engine and gearbox combos. While the cross-MPV employs an upgraded version of the Kwid’s 1.0-litre 3-cylinder petrol engine which can produce 72 HP and 96 Nm of peak torque. The Baleno offers three engine options including a 83 HP/ 114 Nm 1.2-litre VVT petrol engine, a 75 HP/ 190 Nm 1.3-litre DDis diesel and 90 HP/113 Nm a 1.2-litre DualJet K12C Smart Hybrid unit which sees the inclusion of a lithium-ion battery pack.

Transmission choices in the Triber will comprise of a 5-speed manual transmission and a 5-speed AMT option, depending on the variants. Reports suggested that Renault would expand the Triber’s lineup by a 1.0-litre turbocharged petrol mill at a later date. Transmission duties on the Baleno are handled by a 5-speed MT as standard across the engines and an optional CVT (for the 1.2-litre VVT petrol only) 6. Maruti Baleno Vs Renault Triber Top Speed: Which is faster?

Renault Triber has again lost out on the Maruti Baleno in terms of maximum speeds. While there’s still no official information about the top speed of the Renault Triber, it is believed to reach more than 145 kmph with ease but the figure still looks inferior as against the Baleno’s 180 kmph top speed.

The Maruti Baleno also impresses us more than the Triber in terms of acceleration on the tarmac. It takes the Baleno only 12.36 seconds to accelerate to 100 kmph from a standstill while the Triber does it in 16.72 seconds.

With a range of engines and transmisison options, the Maruti Baleno is a lot more fuel efficient than the Renault Triber by a margin. To compare the equivalent petrol-powered Baleno and the Renault Triber, the Baleno knocks out on the MPV with its higher frugality.

Specifically, the petrol-MT variant of the Baleno delivers a fuel mileage of 23.87 kmpl while its automatic counterpart is claimed at 21.01 kmpl. The diesel-powered Baleno models also returns a staggeringly fuel mileage figure of 27.39 kmpl. Whereas, the Renault Triber makes do with only 20 kmpl.

8. Maruti Baleno Vs Renault Triber Price: Which is cheaper?

That said, the entry-level models of the Baleno is essentially Rs 63,000 higher than the base variants of the Renault Triber. The top-spec Baleno models also require a premium of Rs 2 Lakh over the range-topping Triber counterparts.

Apart from the Triber MPV, Maruti Baleno also faces the competition with some other models in its segment such as Maruti Swift, Toyota Glanza and the upcoming Tata Altroz.

11. Verdict: Which model is worth buying between Maruti Baleno and Renault Triber?

With the increasing sentiments toward the people movers like MPVs and SUVs amongst the Indian buyers, the Triber is promised to have its future in the bright side. A greater utility offered within its compact size should be one of the strongest USP of the Triber that makes it worth buying. However, there's no denying that the Baleno has proved its strong position in India for quite some time now. Despite its costlier price tags, the Baleno actually endears itself with more premium bits and various combinations of engines and transmisison onboards, not to mention its greater resale value and aftersale services.

Overall, IndianAuto really hopes that our comparison of Maruti Baleno vs Renault Triber would be of help for you to find your next perfect vehicle. For such more detailed comparisons of Maruti Suzuki cars or Renault vehicles, click on the section of car compare on the toolbar. Indianauto.com provides you with hundreds of informative car comparisons in India so that you can take the best our of the bunch!