Here's a recent video of Suzuki XL7, which looks quite sporty with subtle modifications on the outside and inside. The customized Suzuki MPV was displayed at the 2021 Bangkok International Motor show.

As many of you may know that Maruti XL6 is the premium version of the Ertiga offered in the Indian market. Maruti XL6 is being sold via the company’s premium Nexa dealership network. As compared to Maruti Ertiga, XL6 gets a host of additional features to justify its premium price tag. It gets two captain seats in the second row instead of a bench seat seen on the Ertiga. The automaker has also made a few cosmetic updates to make the Maruti MPV look more butch and premium. Nevertheless, Suzuki retails the 7-seater version of the MPV - XL7, in foreign markets like Indonesia, Philippines, Thailand and Mexico.

Here's a recent video of a modified Suzuki XL7, which was showcased in Thailand at the 2021 Bangkok International Motor Show, which held last month. As compared to the regular Suzuki XL7, the customized MPV gets a white colour scheme with sporty-looking red stripes flowing with the length of the bonnet. The red paint treatment can also be seen on the MPVs roof rails, with wing mirrors featuring carbon fibre treatment. The Suzuki MPV also employs a matte black roof along with a gloss black expandable roof box attached to the roof rails. At the back, Maruti XL7 features a blacked-out underbody spoiler with a faux skid plate. 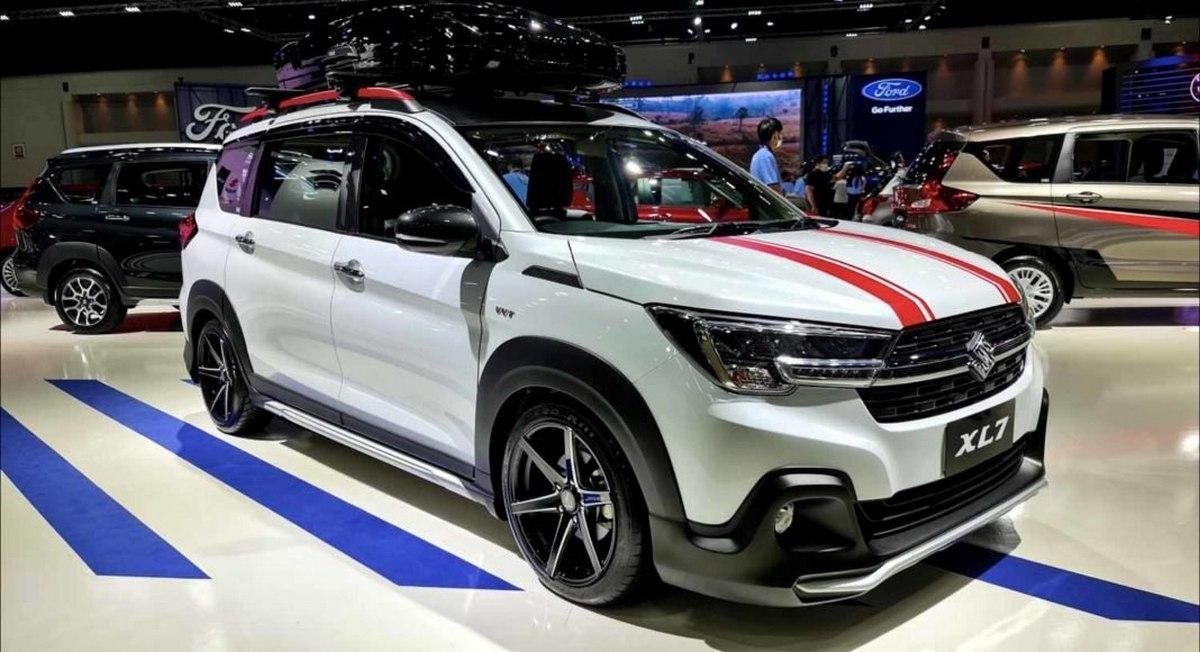 The modified XL7 gets a rear wing and a chrome strip just above the Suzuki badge. The MPV features a new set of aftermarket alloy units, which looks quite sporty. The wheels look larger than the one offered with the stock version of the MPV. Inside, the cabin of the car employs black and red coloured seats with contrasting red stitching on seats and door inserts. The dashboard of the MPV features the same carbon fibre treatment as the side mirrors, while the rest of the cabin remains the same. Right now, Suzuki XL7 is retailed from 7,79,000 baht, which is equal to Rs 18.61 lakh in India.