Renault Triber was launched at the starting price of Rs 4.95 lakh. With less than 5 lakh, what can the entry-level Renault Triber RXE offer its customer?

The higher-spec of the Renault Triber is adorned with better equipment like LED DRLs, body-coloured rearview mirrors, roof rails, silver skid plate, alloy wheels, and chrome-finished door handles and side plastic moulding. Unfortunately, all these features are missing out on the entry-level RXE trim. It comes with basic exterior features like projector headlight, chrome-garnished front grille, boot-lid chrome strip. Even though it lacks roof rail instalment, Renault Triber RXE provides an arrangement for aftermarket roof rail. Irrespective of the mission features, the Renault Triber still looks stylish and captivating which leaves us with not much to complain.

On the inside, compared with the higher variant, the Renault Triber RXE looks stark. In terms of the design, the Renault Triber RXE will not get the silver application across the dashboard, steering wheel, gear knob and around the AC vent, which is available on the higher variant. With regards to the function list, the fully-equipped variants of the Triber come with the infotainment system, push-button start and rear power widow, parking sensor with camera, rear air vents, all of which are absent on the RXE. However, this variant gets the provision for aftermarket music system instalment, which allows the owner to have another alternative option to fulfil their needs. 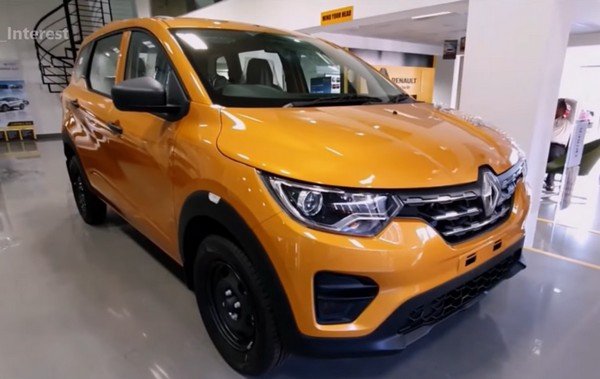 Renault Triber RXE is available with features like power window for the front, power steering, air conditioner, dual-airbags, ABS, EDB, ISOFIX child seat mounts, cup holder for the front and rear seats, rear-seat headrests. Still and all, the Renault Triber in general and the RXE trim, in particular, comes as a very practical model with good interior space. Notably, the boot space can be expanded with the third and the second row folded.

In the beginning, the Renault Triber comes with only one single powertrain option which is the petrol-manual drivetrain. The 1.0-litre 3-cylinder engine is capable of unleashing 72PS of power and 96Nm of torque. The transmission is a 5-speed manual unit. This powertrain can return the fuel mileage of 20 kmpl. Moreover, Renault Triber AMT variant is on the pipeline. The ATM option is expected to come along with the 1.0-litre turbocharged petrol engine this year.

Currently, Renault Triber owns a unique positioning in the market with no direct rival. Some customers might consider Renault Triber as an alternative to other mid-sized hatchback likes Maruti Swift, Hyundai Grand i10, Ford Freestyle, Ford Figo or the Datsun GO+.