Renault Triber To Be Offered With AMT Option Next Year

Renault Triber is launched with only a manual transmission option. An automatic gearbox will be added to the range next year.

Renault has currently launched the Triber at the starting price of 4.95 lakh. At first, it was promised that the Triber would be available in both manual and automatic option but the French carmaker failed to keep its promise and offers manual transmission only. However, it is confirmed that at a later stage, Renault Triber AMT will go on sale. The price of the AMT version is expected to be higher than its manual counterpart by Rs 50,000. Renault Triber is launched earlier at the price of 4.95 lakh

Initially, Renault Triber was launched with one powertrain option. The only 1-litre three-cylinder petrol engine is coupled with a 5-speed manual gearbox. This motor is able to put out a maximum power of 72 PS and a peak torque of 96 Nm. The addition of automatic gearbox is likely to happen at the Auto Expo 2020 next year. Besides the appearance of new transmission option, Renault will also introduce a new version of the existing petrol engine before the 2020 April deadline. In other words, the current BSIV-compliant 1.0-litre petrol engine will be updated to meet the new BSVI emission norms next year. Renault Triber is underpinned by a CMF-A platform.

Renault Triber proposes a unique combination: an MPV-ish body, SUV design elements with a size and price that are compatible with those of a hatchback. With regards to its exterior, Renault Triber sports a dominant grille with three horizontal slats and rectangular headlamps. The SUV ADN is injected through the presence of a silver front skid plate along with plastic body cladding. From the side, the Triber looks similar to the Lodgy but in a smaller size. 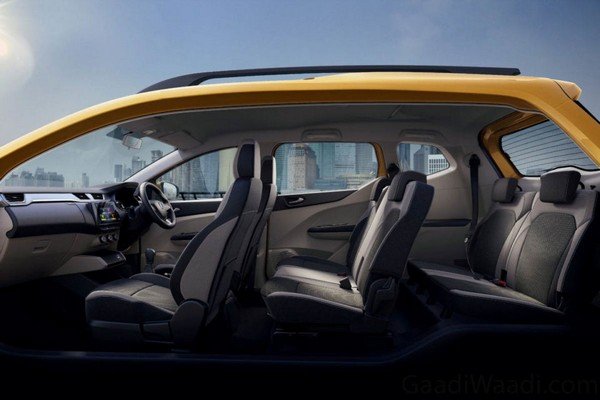 On the inside, the Renault Triber sports a simplified and clean layout. Unlike the current trend of delivering fashionable and plush interior, Renault Triber is focusing on functionality. The dashboard features a touchscreen infotainment system at the centre. The cabin is highlighted by some chrome accents applied to the dashboard and steering wheel. Renault also makes use of a dual-tone black-grey colour scheme for the interior of the Triber. What comes across as the unique selling point for the Renault Triber must be the seating layout with highly flexible three rows.

For now, Renault Triber has a unique position in the market with virtually no direct competitor. With regards to the pricing, customers might consider between Triber and other hatchbacks like Maruti Swift and Hyundai Grand i10 due to their similar pricing. Check out IndianAuto.com for more information.