Maruti Suzuki Dzire ZXi vs ZXi+ - What Is A Better Choice?

Planning to buy a compact sedan and ended up on finalizing Maruti Suzuki's Dzire, but confused between the ZXi and ZXi+ variants? Both of them are loaded well up to the brim but have a massive price gap of almost a lac rupees. Read ahead to find out which is a better choice.

Initially launched as Swift Dzire, but now sold as just Dzire, the success of this small saloon from Maruti Suzuki deserves some accolades for sure. Till date, Maruti has sold almost 1.38 million cars in India and that defines how interesting this car is. The Dzire is a highly desired car around the Indian buyers given the space it has on offer, fit and finish levels offered with the interiors, the engine options available and lot more on the car’s side. The reason Dzire sells in good numbers is not just the car’s attributes but also the way the car looks. It is in its 3rd generation now and it is now more of a revolution than evolution if compared to the last 2 generations of the car. Also, this time around it is sold in 4 different variants, namely LXi, VXi, ZXi, and ZXi+. The ZXi and ZXi+ are the most sold variants and are similarily loaded with tech and goodies. So that’s enough reason to find out, which one is a better choice between Maruti Suzuki Dzire zxi vs zxi+?

Maruti Suzuki Dzire ZXi vs ZXi+ Dimensions: Which is bigger?

Dzire tapes itself at 3995mm in length, 1735mm in width, 1515mm in height, and it has a wheelbase of 2450mm. Dzire is based on ultra-light yet strong Heartect platform and thus weighs between 860 kg to 990 kg. It also has a ground clearance of 163mm, which helped it join our list of cars with highest ground clearance in India. That said, the ZXi and ZXi+ variants share exactly the same dimensions and there isn’t any difference to quote of, except for the kerb weight. The ZXi+ variants get a lot more kit on the inside and outside thus it is a little heavier than the lesser ZXi. The inside of the Dzire is done in beige and black plastics all around. Fake wood and brushed aluminium finish have been used to spruce up the ambience of the cabin. Starting with the dash, it is plain but elegant with trapezoidal air vents on side and centre. The lower part of it is finished in beige while the top hat is done in black, to avoid reflections on the windscreen. Differentiating the two panels is the faux wood inserts. The exciting part about the cabin from the front seats is the flat-bottom steering wheels which look exciting and is really good to hold. The centre stack houses the ICE unit, climate controls, and 2 cupholders and a power outlet and a USB port. Moving on to the second row, things here are a lot more beige than on the front. Beige gives the car an airy feel, but there are dedicated second-row ac vents between the front seats to give the rear passengers a lot more air to breathe. 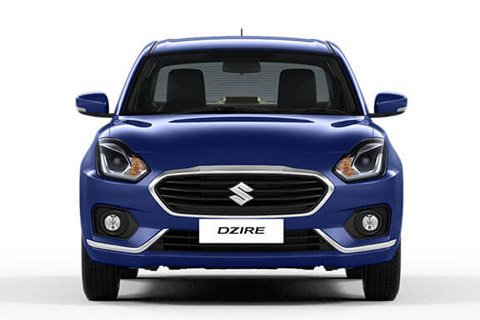 Dzire in its 3rd generation is longer and wider than the car it replaces. The ground clearance and height has reduced by a few millimetres to give the car a stanced look. On the front, its gets big wide grill sitting in between the front bumper and the bonnet, and on its side are the chiselled-swept-back headlamps with the DRLs, which are only on the ZXi+ variant as the ZXi gets conventional halogen bulb setup. Moving on the sides, the ZXi+ gets R15 precision-cut dual-tone alloys wheels, while the lesser ZXi only gets R14 silver alloy wheels. This, however, is the only difference on the sides between the two variants. Talking of how does the rest of the car looks likes? Elegant! In simple words, this car looks as elegant a sub-4m compact sedan could look like. The 3-box silhouette is quite imposing on the sides. IT also gets elements like a chrome-accented window line on the sides, and a large glass area to showcase its airy ambience. 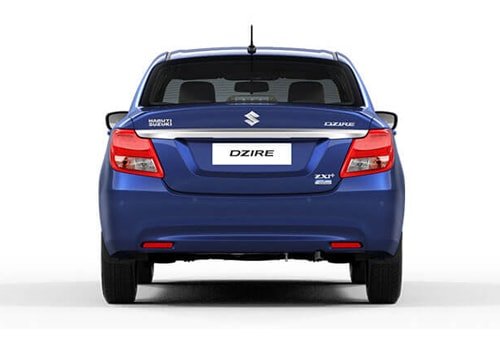 From the rear, both the variants look exactly same with a smartly designed rear-end. The width of the car is fairly noticeable from this angle, as the stylish tail lamps are mounted far away from each other, and connecting them is an elegant chrome strip. However, there isn’t much drama at the rear to talk of.

On the safety front, both ZXi and ZXi+ variants are equally loaded with a similar kit on offer. The safety features you get in Dzire ZXi or ZXi+ are ABS with EBD, dual front airbags, door ajar warning, reverse parking sensors with camera, ISOfix child seat anchorages, front seat belt reminders, speed warning alerts and front seat belts with pre-tensioner and load limiter.

The Dzire is well-secured as both of these variants get similar setup to secure the car. It gets passive security systems like the anti-theft security system, engine immobilizer, speed-sensitive door locking, impact sensing auto door unlock and key-left warning.

On the convenience front, both ZXi and ZXi+ variants of the Dzire gets the most needed comfort and convenience features like the keyless entry & go with a push-button start-stop system with smart key, rear AC vents, rear-seat armrest with cupholders, automatic climate control, all-4 power windows, and auto headlamps.

The Zxi and ZXi+ variants of the Dzire same engine specifications, so both of them are identical to each other in terms of outright performance.

Dzire is a small family car that is designed to use when pottering around city or cruising on highways. It has got abundant power to cruise at triple-digit speeds for whole day long. However, there are no top speed claims from the manufacturer, while some of our readers claimed to have clocked a speedo-indicted top speed of 175kmph.

The lower-spec ZXi variant is the cheaper car here. The ex-showroom price of Dzire ZXi is Rs. 7.32 lakhs, while the ZXi AGS variant costs Rs. 7.79 lakhs. The expensive car here is the Dzire ZXi+, which is priced at Rs. 8.21 lakhs for the manual variant, while the ZXi+ AGS costs Rs. 8.68 lakhs.

Maruti Suzuki is a very potent car of its segment and thus competes with a lot of other cars like the Honda Amaze and upcoming Hyundai Aura.

Verdict: Which model is worth buying between Maruti Suzuki Dzire ZXi vs ZXi+? Dzire ZXi+ here looks like a more lucrative deal in comparison to lower ZXi trim. The cheaper ZXi variant comes with all the bells and whistles that ZXi+ variant comes with, apart from a few changes. The lower-spec ZXi misses out on a touch-screen Smartplay infotainment unit, instead, it gets a conventional entertainment unit. The other big change is the 15-inch alloy wheels and LED projector-based headlamp units with DRLs on the ZXi+, whereas the ZXi variant gets 14-inch alloys wheels and conventional bulb based headlamp units. In our opinion, the additional equipment is definitely worth your money.