Scooby-Doo Gets His Own Monster Truck! 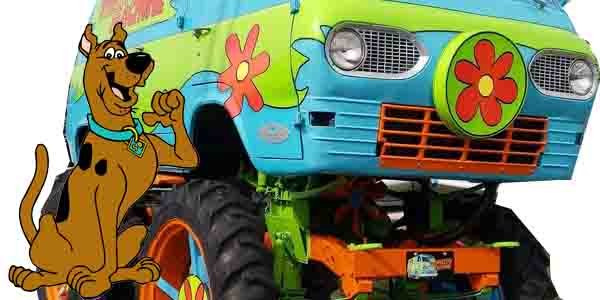 At first glance, we hardly recognize it as the original 1967 Dodge A100 as the car has been crazily transformed into a big tall minivan that is a special replica of the Mystery Machine used by the crew on the Scooby-Doo series. The colourful exterior paint of the car is familiar as it stays true to the iconic green and blue colour scheme of the "Mystery Machine", not to mention the flower on the front bumper, fenders and wheels. However, this “Monstery Machine” is even more interesting than the original one. While this Scooby-Doo truck is actually a special monster truck of sorts, with that super-big wheels, it seems much like the buggy cars that will possibly drive you away from the “ghost” or any kind of threats you may encounter on your ways, in a blink. And we wonder, how many more mysteries the crew could solve with that off-road “Monstery Machine” instead of the earlier one? This is a monstrous thing! The van body looks out of balance on the Dodge's chassis. The car makes use of a 318 V8 Mopar engine that sends power to all four wheels through an automatic transmission. The power, torque output of the “Monster” is not revealed but we think that it’s a kind of fun-to-drive car that you can take some spin on your back yard rather than a performance-spec vehicle. Overall, it looks quite unsafe and it's illegal to drive on the public roads. The car was advertised on eBay where it was available for sale at a “buy-it-now” price of $15,900. Just imagine, if you park this one-of-a-kind “Monstery Machine’ replica car in the driveway, you would definitely draw a whole bunch of attention from the neighbourhood.