The Weirdest Cars Ever Designed: From Swimming Car to Egg-shaped Car

Cars are usually deemed as boring and similarly designed. However, there are many cars that have very distinct and weird designs that would make you remember at first glance.

Have you ever thought that all cars have the same boring old design? Or wondered to yourself will there ever be a car that flies like those in sci-fi movies? Well, you might be pleasantly surprised!

Cars’ designs reflect the designers’ vision and idea, as well as the technological advancement of their respective era. As the result, there are many weird cars that were built, some became a manifestation of human’s capability and the technological and industrial development, some got lost in history. Despite their outcome, they are a testament that cars are a pivotal invention of humanity. These are some of the weirdest cars ever designed in history.

The Stout Scarab is considered the first minivan ever created. Designed by William B. Stout, the car is ahead of its time in many of its features. The first Stout Scarab’s prototype, completed in 1932, is likely to be the first car to have an aluminium chassis. William B. Stout visualized the machine to be an office on wheels, so the car was designed by employing a unitized body structure, and a Ford V8 engine was tuck in the rear of the vehicle. Additionally, it features independent suspension and utilizes coil springs on all corners, ensuring a smooth and quiet ride. The Stout Scarab’s brother, the Stout Scarab Experimental, was designed in 1946 and is the first car in the world to have a fibreglass body.

Despite its innovative features and an original design, the aesthetic of its time generally deemed the Stout Scarab as unattractive. That and a very high price, $5,000 ($80,000 in 2010), made the car an impossible purchase for many, in spite of its press coverage and media attention. Only nine Stout Scarabs were built, and all of them are handmade with no two identical Scarabs. The car has gained appreciation many years later, recognized as an Art Deco icon for its futuristically intricate and curvaceous design. 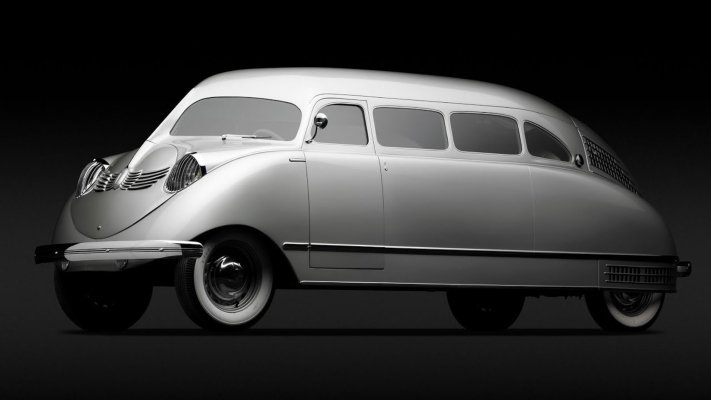 The Oeuf électrique, or electric egg, was promptly named after production due to its egg-reflecting shape. The designer, Paul Arzens, was a traditional artist who initially recognized for his talent in painting. Despite his switching interest to automobile engineering in 1935, his artistic creativity were still palpable in his designs. In 1936, Paul Arzens designed a prototype body built on the chassis of an old Buick. The car was named ‘La Baleine’, meaning the whale, as its lines and curves evoked the image of the ocean creature. The Oeuf électrique was made in 1942, and appropriately reflected Paul Arzens’ artistic vision.

Petrol was a rarity to household use in 1942 Paris as the city was occupied by Nazi, so the three-wheeled Oeuf électrique car was designed to run on batteries, contrary to its predecessors’ dominant use of gasoline. The bodyshell is built from hand-formed aluminum and panoramic ‘Plexiglass’ - a new material at the time. The body weights astoundingly light, only 60kg, and the electric motor that was mounted to the rear, raising its weight to 90kg. The Oeuf électrique ultimately amounted to 350kg with added batteries, and was able to carry two passengers. The car has since been exhibited in the ‘Dream Cars’ tour around the U.S., where it is praised for its simplicity and the French essence of joie de vivre manifested in the car. 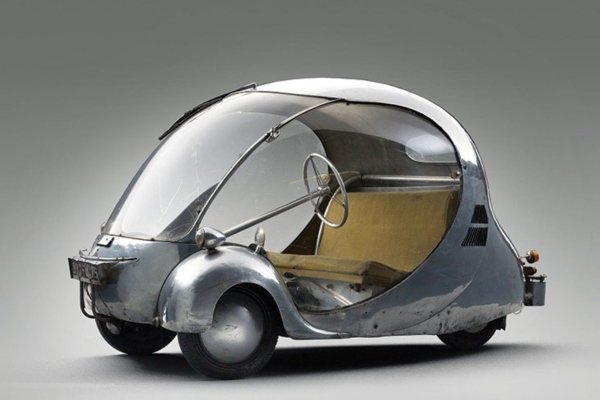 Ever since the creation of sci-fi, people’s dream of owning flying cars has never ceased. Terrafugia, the Massachusetts-based company, might make it a reality. Having been developed since 2006, this flying car is said to go on the market in 2019. The Transition has been through many trials and errors, going under numerous rigorous testings to ensure that it would meet the safety requirements. Even though it looks like a cartoon version of an air plane much more than it does a car, the Transition is said to fit snuggly into any house’s garage.

The Transition has four wheels like a traditional car, but it also has folding wings and a twin tail. A rear-mounted propeller and a four-cylinder electric engine will help power the car for take-off. The Transition can fly at 100km/h at altitudes up to 3048m, with a flying range of 787km. Controls for both flying and driving are available: for driving, conventional brake, pedals, and a steering wheel; for flying, yoke and rudder pedals. However, experts claim that during the Terrafugia Transition’s development process, many advances have been made in terms of flying vehicles, like ‘air taxis’ that don’t require a runway, so it’s very likely a product the Transition wouldn’t thrive in the mass market. The Phantom Corsair garnered a lot of media attention for its sleek and futuristic design, from appearing as the ‘Flying Wombat’ in the 1938 movie ‘The Young in Heart’, to being featured in video games like ‘L.A. Noir’, the Phantom Corsair is a pioneering vehicle that possesses many features that are utilized in cars’ design today. The car was designed in 1938 by Rust Heinz, heir to the famous Heinz company that is recognized by their signature product - Heinz ketchup. The car was meant to go in production as a luxury item and planned to be sold at $12,500. However, Rust Heinze’s untimely death has halted this process, making the Phantom Corsair the only of its kind.

Built on the chassis that was considered the ‘most advanced’ at that time in the U.S. the Cord 810, the Phantom Corsair can hold up to six passengers. Its smooth surface forgoes of running boards and detached fenders, which allow the curves of the body to flow smoothly and undisturbed, creating a grand silhouette. Unlike the majority of cars at the time, the car doesn’t have door handles, as the doors are opened electrically using buttons located on the exterior and on the panel. The car can reach the top speed of 195km/h. The Phantom Corsair, with its advanced design and modern features, is destined to become a classic, had it gone into production. 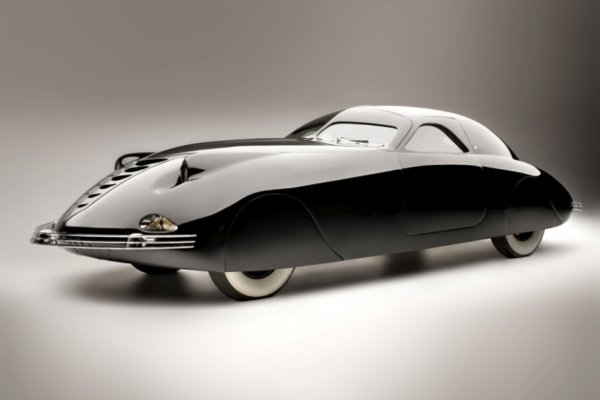 The Amphicar was designed by Hans Trippel in West Germany and made its first appearance the 1959 German Auto Show. It is not the first swimming car ever invented, as that title is taken by the Volkswagen Schwimmwagen, an army vehicle used in World War II. However, the Amphicar is much more popular as it is more readily accessible. This swimming car is notable for its ability to cruise both on land and in water, which was a very exciting addition to the car scene at the time.

The vehicle is a four-seater is powered by a rear-mounted, four-cylinder Triumph Herald engine. The engine powers the rear wheels and two propellers in water, and the front wheels steer in both environments. In order to prevent water from penetrating the car, the doors are tightly locked, and the car has to be extremely rigid to withstand water pressure, which results in its weigh of around 1,043kg. On land, the Amphicar’s alleged top speed is 145km/h, but testers say it could only reach 105km/h. In water, it can reach a speed of 16km/h. These Amphicars are the only amphibious vehicle to ever be mass produced and was even recognized as legitimate boats by the U.S. Coastal Guard. Its uniqueness and position in automobile history have made the Amphicar a valuable collectable piece, with the majority of them sold for prices close to $100,000. >>> Top 16 Weirdest And Ridiculous Traffic Laws All Around The World