Buying A Second-hand Maruti Ciaz? Here are Some Tips To Get A Good Deal

Buying a used car makes sense if you are on a budget. This article could be useful for someone who is yearning at buying a second-hand Maruti Ciaz in India.

When talking about buying a C-segment sedan, people tend to think about the Maruti Ciaz naturally. If you are itching for the Maruti Suzuki Ciaz, but do not want to turn out your pocket, buying a used car might be an idea. But then again, if you are a newcomer having no experience in making a deal with the most lucrative price, this article will be your lodestar. Maruti Suzuki Ciaz tops as the best-selling sedan in India

Has been around the corners of India since 2014, the Maruti Suzuki Ciaz wins the massive popularity to become the best-selling mid-size sedan on sale in the Indian market across almost every segment. The Ciaz outnumbers the big runner- Honda City - by a good margin. This is thanks to its spectacular driving performance, comfortable interior and high fuel efficiency on offer. Therefore, it turns out to be superlative to buy a new Ciaz and perfect to buy an old one. Choosing a three or four-year-old model of Ciaz will be a great idea if your budget ranges from Rs 6 Lakh to Rs 7.5 Lakh. The thing is, the condition of the car will decide how much you will pay, so don’t take any easy option. What’s special that, standard safety kits like dual airbags or ABS will be attached to your car no matter which variants you want to purchase. As per high mileage has a long-lasting value, the used model of Maruti Suzuki Ciaz also offers low-running costs. If you drive in around 50 km per day, the fuel efficiency could vary from 17 to 20 kmpl. Also, affordable spare components combined with comfort inside the car remains unmistakable.

The first step into choosing the best second-hand Maruti Ciaz is to decide on which variants you are dreaming of. The base variants VDi and VDi+ might be sold at Rs 6 Lakh. The 2015 well-loaded Ciaz Z+ trim which comes to offer a high-end interior with SmartPlay infotainment system, Android Auto and Apple CarPlay compatibility, navigation, leather seats, leather-wrapped steering wheels, etc. can be a good option. Besides, the mild hybrid version of diesel Ciaz was launched in 2015 is another vote for diesel-powered second-hand Ciaz. For those who enthuse about sporty elements, the RS trim with sporty spirit, all-black-themed interior and spoiler is a highlight. It also takes the same equipment list as compared to the ZDi+. 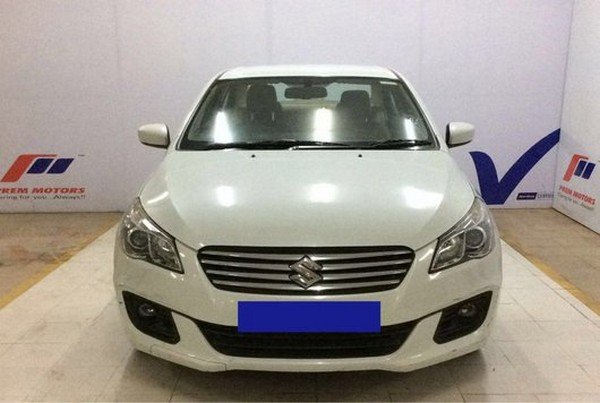 Of course, anything has its both two sides. Apart from being quite a small car, the second-hand Maruti Suzuki Ciaz can cause, from time to time, troublesome to the new owner. So it is crucial to do some test drive or ask for help from car connoisseurs before making a final decision. Below we list out a handful of tricks to check out some important parts of a used Maruti Ciaz.

Coming masterfully as a strongly-built compact sedan in the Indian auto space, the Maruti Ciaz’s cabin is well-equipped with high-quality materials. Some of the buttons; however, could be worn out after some time then it’s a little tip that you should inspect the car during the daytime or under sufficient lighting conditions. Go through all the switches and buttons to make sure that they can work smoothly.

The functions and responsiveness of the SmartPlay Infotainment System might be broken now and again by time. The system can stop working or fail to respond while you’re along the roads. So before each purchase, try to adopt the best or in other cases, if not, you need to comprehensively take off the car and restart it. This may not be an issue at all but for the unnecessary irritation that could emerge.

A normal problem with some used Maruti Suzuki Ciaz is with its steering wheel. Many Ciaz owners have complained about the trouble on steering. Once in a while, the steering wheel could, one way or another, fail to come back to its initial position after drivers take a U-turn. Thus, a proper test drive is necessary before dipping into your pocket. Meticulously inspecting the interior of the old car is completely necessary

After ensuring all these above components are ok, shift your focus to the dashboard. The long wheelbase of the mid-size sedan could be great for its space, but it results in the faster devaluation in due course of time on several parts like the AC vents. Fortunately, the service fee for those parts is not so high with under Rs 8,000 for all rectifying costs.

The front suspension tends to be the major problem of not merely the Maruti Ciaz but all Maruti Suzuki models as well. Only a short drive on a rough tarmac is sufficient to find out the front suspension’s status. The front connecting rods might stand up to the wear and tear. Hence you need to pay attention to the irritating noise from the suspension. While fixing it does take a small fraction, it’ll be a better deal if you could buy a second-hand Ciaz with the fewest problems.

How much to spend

As I have just mentioned above, the price of the second-hand Maruti Suzuki Ciaz could be positioned between Rs 6 and Rs 7.5 Lakh, according to the variants and conditions of the car. At launch, the Ciaz was priced at Rs 8.08 Lakh (onwards, Ex-showroom). For a model covering above 40,000 km with the age of three or four years, its expected price might sit on Rs 6.5 Lakh. The Z+ trim will be the costliest thanks to its extra fitments. The facelifted version of the Maruti Suzuki Ciaz is all set to be launched in India this year so that we could expect a marginal decrease in the price of used cars. You can seek a model from Maruti’s True Value Dealerships or look through on our “Used Car” to pick a good one. Remember that, the resale value of the Maruti Suzuki Ciaz is very long, so you would be paid off to the money you spend.