Ford EcoSport vs Tata Nexon: Competitors from the sub-compact SUVs

Ford EcoSports and Tata Nexon will complete in the segment of sub-compact SUVs. Which car would you think to deserve to get a better recognization?
Tata Nexon 2017 - Bouncer

In the recent years, the car industry has seen the ever-growing interest for SUVs, and accordingly, more and more car automaker decides to enter this segment of SUVs, especially the compact SUVs – a great choice for a reasonable price along with an SUV nature. In this playground, Ford EcoSport is a familiar name which introduced to the Indian market back in 2012, while Tata Nexon is a fresh competitor debuted last year in 2017. Nevertheless, with the recent facelift of Ford EcoSport, these two cars will make a fair and fierce competition.

Despite being on the same segment, the EcoSport and Nexon seem to follow two different styles. While Tata Nexon looks funky and sporty, the EcoSport appears to be imposing and masculine. The exterior of the Nexon distinguishes it from any other cars on the road. It sports interesting design features like contrasting floating roof, white-off paint trims, and a peculiar rear ends with dual tone finish. While the EcoSport opts for a more regular style, boasting a huge front grille and angry headlamps and fog light units. Generally, the EcoSport’s design lacks the wow factor, but it is undeniably an effective and balancing car.

Ecosport and Nexon are quite compatible in terms of the length with the EcoSport is marginally 4mm longer. Apart from the comparable length, the width and height of these two differ greatly. Standing at 1647mm, the EcoSport is 40mm higher than the Nexon. On the other hand, at 1811mm, the Nexon is the wider car when compared to the 1765mm-wide EcoSport. At 352 litre, EcoSport’s boot is marginally larger than the Nexon.

Inside the car, you can find out that both the EcoSport and Nexon chases after the practicality. They all have a well-functioning and easy-to-use dashboard. With the grey-black interior, the Tata Nexon’s cabin feels more mature while we will have a stylish all-black interior in the Ford EcoSport. But looking closer at the details, it is easy to spot out that Ford’s instrument cluster is quite dated and basic. When considering the material quality, you will find these two are neck and neck with equally good quality. However, there is still space for improvement for the Nexon in terms of the fit and finish.

Both of the cars come with touchscreen infotainment systems, and Ecosport’s unit looks shiner with gloss black piano border. As far as the seating quality is concerned, the EcoSport offers more comfortable seats with great lower back support as well as satisfying cushioning. 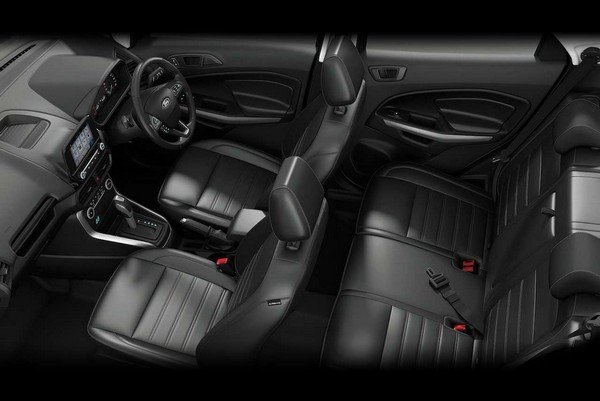 In terms of space, it is worth to know that neither the EcoSport nor the Nexon could provide enough room for five people. In fact, they are more suitable for four. Between the two, Nexon could offer better knee room at the rear than the EcoSport could. However, having the taller body, the Ecosport has a slightly larger headroom.

Both cars get a touchscreen infotainment system with Android Auto support and reverse camera. But only the EcoSport supports Apple CarPlay while the Nexon gets the adaptive guideline on their reverse camera. The EcoSport's touchscreen comes with an adaptive guideline

Other features shared by the two cars are a keyless go, engine start/stop button and control-mounted steering, climate control. But Nexon has rear AC vents which are not available in the EcoSport.

ABS with EBD, dual airbags, child safety locks, power door lock are all offered at the two cars. However, some extra features like brake assist, traction control, and side airbag, vehicle stability control system are only available in the EcoSport.

Ford EcoSport petrol version receives power from either a 1.5-litre engine (123PS/150Nm) or a 1.0-litre engine (125PS/170Nm) while Nexon’s petrol version is powered by a 1.2-litre engine which makes 110PS/170Nm. Both of them are three-cylinder, however, they are still refined engines. The EcoSport petrol comes with two engine-transmission options, which are 5-speed manual and 6-speed automatic. While the Nexon uses a standard 6-speed manual gearbox or optional 6-speed AMT to transfer power to the wheels.

The Ecosport’s diesel engine offers better drivability. On the other hand, the Nexon could easily run out of breath at low or mid-range, making city driving a demanding job. And with the fuel efficiency, the Nexon also feels much better with higher mileage, around 15 to 17kmpl. 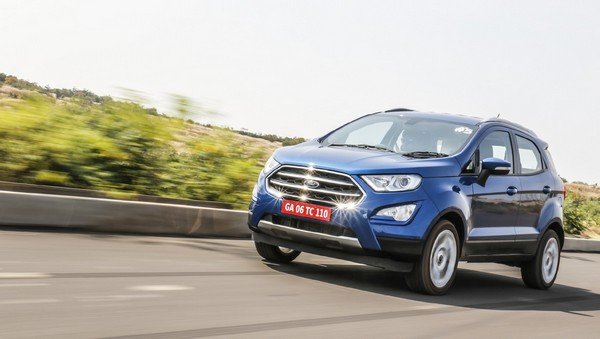 Ford EcoSport has a better drivability

When it comes to the diesel engine, the Nexon outperform that of the Nexon. Even though Nexon’s diesel could offer a decent driveability and powerful performance at mid-range, it could not compete with the sprightly 1.5-litre TDCI mill of the Nexon which deliver a quick acceleration. However, the Nexon gets an advantage as it is equipped with different driving modes – Eco, Sport, and City. These settings allow it to alter their manner to suit different conditions. Tata Nexon offers driving modes, which are not available in the Ford EcoSport

The mileage of the diesel engines of the two cars are quite compatible. In city driving, each car could return from 14-16 kmpl and on the highway, it could reach 19kmlp.

Tata Motor is known for producing cars with good ride quality, and the Nexon is not an exception. The riding quality of the Nexon easily surpasses the EcoSport. Even with the updated version, Ford has tuned the EcoSport for softer suspension, it is a tad stiff. Not to mention that its new 17-inch tyres even make the car stiffer.

In terms of steering, the EcoSport unit is light and responsive across the speed range. Whereas, the Nexon’s steering becomes heavier as the car speeds up. Both cars’ braking systems are good.