Check out the list of 10 best small cars in India with prices, specifications to get everything to know about the most worth-considering small cars of India.

When talking about small cars in India, things surfaced on our head should be compact sizes, higher fuel efficiency and cost-effectiveness. For these reasons, compact cars still cement a strong position in the Indian automobile market, despite the growing sentiments towards highly-priced SUVs and crossovers among buyers in present days. India, as we all know, is a price-sensitive market and small cars are always a better option as they can ease out pocket the most. In the days when the number of nuclear families is on the steeper side, small cars are taking back buyers’ affinity and auto manufacturers have eyed this trend to launch important products in this segment. We’ve compiled a complete list of best small cars in India on the basis of prices, specifications, features and more.

If you asked us which is the oldest-running and one of the best small cars of India, the Maruti Alto 800 would be the first one to be named. Maruti 800 was a small city car launched back in 1983 and has won thousands of hearts of the Indian car aficionados. Over years of existence, the Alto 800 has changed much in terms of design, features and specs. And even though it’s no longer the best-selling model in Maruti Suzuki’s product lineup, there’s one thing that never changed: it is always a favourite small car for first-time buyers in India. 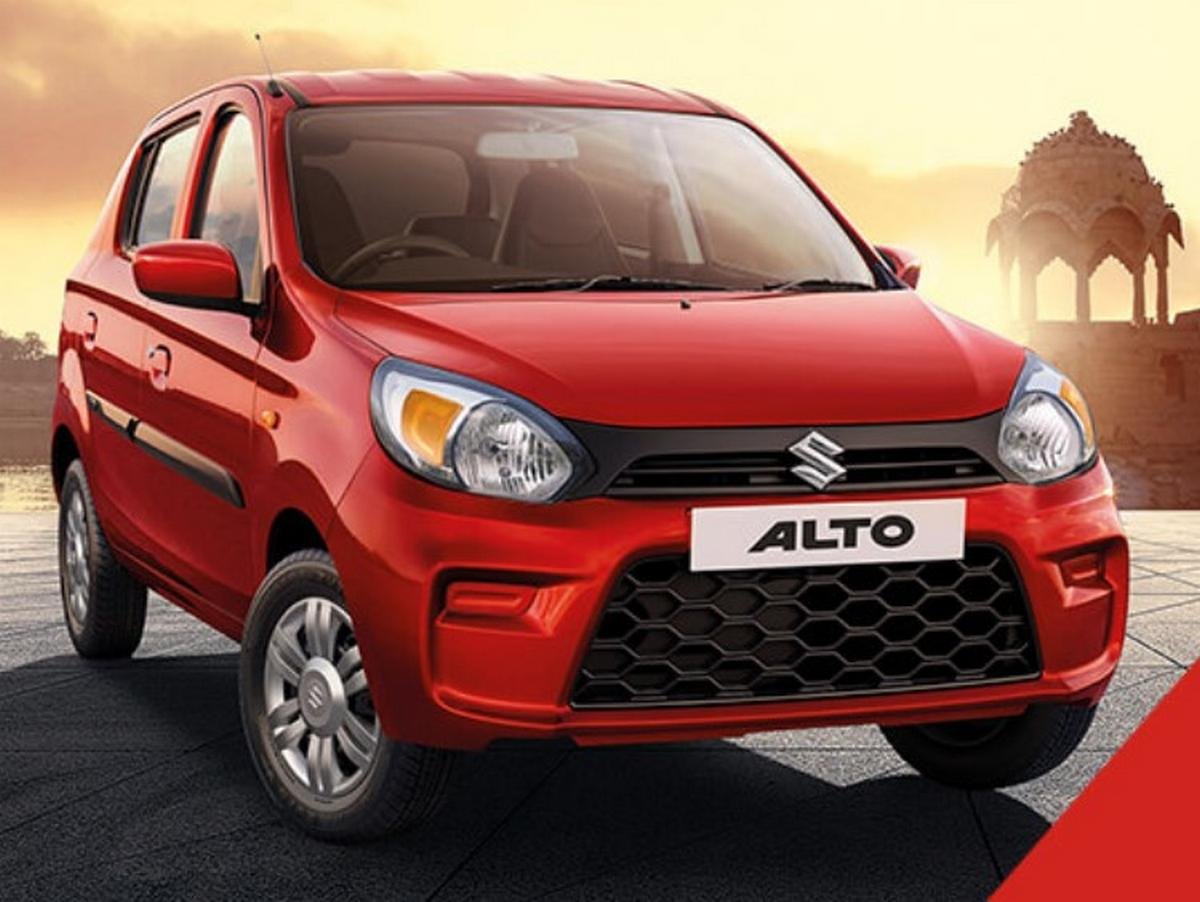 The new Alto 800 remains all its core strengths, including high fuel efficiency, low maintenance cost and pretty good ride & handling quality for a car of budget. What’s better is that the Alto has been out in the new car market for long enough to be a good option in the used car segment. You can easily find thousands of used Maruti Alto for sale across the country on IndianAuto.

Apart from the Maruti Wagon R, the Maruti Celerio is another tall boy hatchback that looks a bit less boxy but feels ways better and more premium than the former. Compared to many other Maruti cars, the Celerio falls behind in the sales stakes but it's still one of the best small cars that you can find in India with good prices.

Earlier this year, the Maruti Celerio BS6 was introduced to the Indian market at the price starting from Rs 4.4 Lakh (ex-showroom). Currently, the Maruti Celerio has one engine options on offer - a BS6-compliant 1.0-litre K10B engine with both regular petrol and CNG mode. In the petrol mode, the Celerio's engine can churn out 68 PS of max power and 90 Nm of peak torque. Transmission choices for the mill include a 5-speed MT and a 5-speed AMT.

The Maruti Celerio performs well when it comes to affordability and fuel efficiency. The tallboy can deliver an ARAI-rated 21.63 kmpl (for the petrol MT and AT variants) and 30.47 km/kg for the CNG manual version. Renault Kwid, which paved the way for the cross-hatch car sub-division in India, is the next car name to be called out. Regarded as the mini-Renault Duster, the crossover-ish hatchback by Renault had been the bestseller of the brand in India, before the introduction of the Renault Triber. The Kwid hatchback is quite a convincing car in its category in India. The critically rugged-looking SUV-ish styling design of the car is one of the main reasons that lures in a set of buyers to Renault’s showrooms every month. In particular, the 2019 Renault Kwid (facelift) comes at the right time to regain buyers’ interest to the cross-hatch after more players have jumped on the bandwagon already. As an SUV-like hatchback, the Kwid comes with a host of SUV crossover-ish design cues like high ground clearance, well-sculpted bumper, skid plates, black body claddings and raised bonnet, making it stand out from the crowd.

Also Read - 2020 Renault Kwid Facelift – All You Need To Know

The next model in our list of best small cars in India is the Kwid-rivalling Maruti S-Presso, which is the company’s newest model. Launched amid fanfare in late 2019, the S-Presso received a massive response from the domestic car buyers and witnessed a monthly sales figure of over 10,000 units in October 2019. Therefore, despite being younger, the S-Presso totally deserves to be here, as one good example in the top of 10 small cars for India. The latest budget small car of Maruti Suzuki debuts the carmaker’s BSVI-compliant 1.0-litre K10 gasoline engine which is announced to make it to other Maruti cars in the future. This engine is capable of generating 68 HP and 90 Nm of torque and comes linked with a 5-speed MT and an AMT option. Claimed to be a frugal car, the Maruti S-Presso has an ARAI-rated mileage of 21.4 kmpl (for the lower variant) and 21.7 kmpl (for the higher trims level).

Tata’s most affordable vehicle, the Tiago also presents in our compilation of 10 best compact cars in the Indian market. The Tiago is a successful runabout car by Tata as it holds a firm position in top 10 selling cars of India. The Tiago did not have an easy “dreaming” start. The Tata Tiago kicked off slow with less than 5,000 units sold per month on average. Given the fact that models like Tata Indica and Bolt were embedded firmly in customers’ minds, the Tata Tiago struggled to attract the crowd towards its showrooms initially. Nonetheless, with a healthy value-for-money quotient and compelling package, the Tata hatchback eventually managed to make them understand the traits that it was selling on.

The Tata Tiago is based on by Tata’s latest IMPACT design language that also underpins the Tata Altroz premium hatchback that would see its market launch in the coming months. Under its skin lies two engine options, including a 1.2-litre Revotron petrol engine and a 1.05-litre Revotorq diesel motor with multi-drive modes. While the former can produce 85 PS/ 114 Nm of torque and comes paired with either a 5-speed MT or an automatic unit, the diesel mill has an ability to churn out 70 PS and 140 Nm of torque and is available with a 5-speed manual gearbox only.

One of the country’s highest-selling vehicle, the Maruti Swift is in its third-gen avatar now. The mini car is a roaring success of Maruti Suzuki in India for many good reasons. It scales to the heights of the chart with its funky-looking design, cost-effective values, decent fuel efficiency and long equipment list, not to mention the brand image itself. Apart from the stunning design, the well-received small hatchback car packs itself with a batch of comfort-focused goodies on the inside along with its fun-to-drive performance versus high mileage. At the moment, the Maruti Swift uses a BSVI-spec 1.2-litre K12B 4-cylinder petrol engine option merely. Note that the older diesel engine of the Swift car hasn't received the update and faced the axe before the BSVI norms roll out. It's worth noting that the Swift might get a new hybrid variant in the coming months, promising to upscale the fuel efficiency of the hatchback to a greater level.  Apart from a manual transmission, the Swift is available with an AMT option onboard that makes driving in the stop-and-go traffics a breeze. The Swift is also easy and cheap to maintain and can be had with plenty of models in the used car segment. The Swift is easily among the best small cars in India.

The king of the B2 segment, Maruti Baleno is the most preferred premium hatchback in the country. Rules the market with its premium looks, feature-laden cabin and peppy yet frugal petrol and diesel engines, the Baleno is one of the most perfect compact cars in India. The Baleno comes as the first choice for anyone who has been looking for an upmarket hatch that offers good ride quality at the same time. The 1.2-litre petrol engine of the Baleno can pump up to 83 HP and is available with both 5-speed MT and CVT options. While the new-generation Hyundai Grand i10 Nios has been launched, the old-gen Grand i10 remains as a solid contender in Hyundai’s lineup in the Indian space. The Maruti Swift rival is an interesting small urban car for India. Compared to the Swift counterpart, the Grand i10 offers a more decent space inside the cabin which boasts a premium design as well as many creature-comforts. The Hyundai Grand i10 is a well-priced small car that is even more affordable than the budget-end Maruti Swift. The Grand i10 is on sale with a 1.2-litre 4-cylinder petrol engine and a 1.2-litre 3-cylinder diesel engine option, both of which are already ready for the BSVI emission standards.

The Hyundai Grand i10 proves to be irreplaceable. Combined with the feature-packed Grand i10 Nios, the Grand i10 even overtook the Hyundai Venue in terms of sales in August 2019. The new Venue is currently the company’s biggest player in the sub-4m SUVs segment.

Not just once but many times that the Elite i20 became Hyundai’s best-selling model of India. It did just that again in October 2019 when Hyundai saw over 14,700 units of the Elite i20 sold in the country during the month. The Hyundai Elite i20 is a respected small car in India. Being a premium offering in the B2 segment, the Hyundai Elite i20 impresses buyers with a proper European styling design, great ride quality, an upmarket cabin and fairly powerful petrol and engine powertrain setups. The Hyundai Elite i20 draws the power from a 1.2-litre Kappa petrol engine option in its heart. The spacious and functional cabin that is replete with high-quality materials all around the corners and steps up in the premium feel over other cars in its segment. And of course, the attractive pricing of the Hyundai Elite i20 comes as one of its biggest USPs.

The last model in the list of best small cars in India should be the Ford Figo. First launched in the market in 2010, the Ford Figo has remained an instant hit for the American brand in India. It even won the prestigious title of “Indian Car of the Year” in 2011 and became the biggest sales driver of its brand in the domestic space. In 2019, Ford gave a facelift to the Figo, brought in a number of design changes, added features and new safety kits to the hatchback. In its tweaked avatar, the new Figo appeared as a handsome-looking small hatchback car to go squarely against the Hyundai Grand i10 and Maruti Swift in the competition. A big talking point in the 2019 Figo is the arrival of two new engine options under the hood. The 1.2-litre 3-cylinder petrol engine makes 96 HP and 120 Nm of torque, is mated to a 5-speed MT while the other is a 123 HP/ 150 Nm 1.5-litre 3-cylinder unit that is coupled with a 6-speed automatic torque converter option. There's also a 1.5-litre diesel engine on offer. The Figo is set to see the petrol-automatic variant arriving in late 2020.

Among a number of small cars flooded in the Indian auto market these days, these are 10 best compact cars that are ruling the segment in India. For such more interesting car stories in the country, keep updated with Indianauto.com!