Here's our detailed comparison on Maruti S-Presso and Hyundai Grand i10 Nios. Read on to know which is better of the two in terms of design, features, specs, prices and more.

Maruti Suzuki has launched its all-new entry-level hatchback, the S-Presso in India at Rs 3.69 Lakh. Ahead of its official debut, the Maruti S-Presso has created much hype amongst the Indian enthusiasts as it will be the latest tallboy to join in Maruti Suzuki’s lineup. The new S-Presso will take up the place between the Alto K10 and the Celerio and will come as a viable alternative for buyers looking to buy the Maruti WagonR at a lesser price.

Whereas with the recently-launched Grand i10 Nios, Hyundai wants to carve a mark in the compact hatchbacks segment. In an aim of reflecting the modern buyers’ lifestyles, the Grand i10 Nios carries a sporty styling design, spacious cabin and peppy engines, etc. ones that they’ve got to get a chance, then. And truth be told, the Grand i10 Nios receives such a phenomenal response from the customers that helped it overtake the Venue to become the best-selling Hyundai car in August 2019.

For starters, design of the S-Presso and Grand i10 Nios will be an issue of the first importance when people are looking to buy a car. Launched on August 20, the Hyundai Grand i10 Nios is essentially the second generation of the Grand i10 in India and the third-gen Hyundai i10 in some international markets. In a market ruled by crossovers and SUVs today, the Grand i10 Nios comes as a gulp of fresh air backed by conventional hatchback design cues. No extended ground clearance, no plastic claddings, no skid plates, the Hyundai Grand i10 Nios is still imposing enough to go squarely up against its arch-rivals in the hatchback segment. Hyundai cars are getting edgy. And that’s also the first impression we get from the front of the Grand i10 Nios.

In line with the brand’s latest design philosophy, the Grand i10 Nios undergoes evolutionary changes on its exterior design. The front fascia has been thoroughly redesigned for a sportier look. The prominent cascading grille is wider and taller in the new Grand i10 Nios while the unique boomerang-shaped LED DRLs are mounted at the edges of the grille, adding to the distinctions of the vehicle. The projector upswept headlamps, angular fog lamps housing, a sculpted bumper along with many creases on the bonnet are the ones that actually spice things up around the market appeal of the Grand i10 Nios. The side profile of the car gets more classy details, including the sharp creases on the bodywork, 15-inch alloy wheels, blacked-out C-pillar among others. The Nios looks decidedly different when it comes to the rear end. A new rear bumper and tailgate design, fresh tapering tail lamps, a chrome strip at the base of the tailgate add a bit of flair to the new vehicle. In comparison, when talking about the exterior design, the Maruti S-Presso seems to follow a different styling approach. To nullify the Renault Kwid’s advantage in the segment, which is to have an SUV-styled appearance, Maruti Suzuki decided to jump on the bandwagon by introducing a mini crossover-hatchback rather than going on the traditional way. The all-new S-Presso carries forward the upright stance and a host of design elements from the Future S Concept debuted at the 2018 Auto Expo. The SUV-inspired bold front fascia of the S-Presso is reminiscent of the popular Vitara Brezza due to the presence of twin-chamber headlamps merging into the sleek upper grille. Even with the angular-shaped chrome inserts on the grille also mimic those of the Brezza as well. In keeping with the SUV-inspired personality, the Maruti S-Presso comes with a squared-off front end with a high hood lip while the LED DRLs are placed lowered under the headlamps, the front and rear bumpers are blacked out, going with the black body claddings over the sides.

However, instead of using alloys, the entry-level S-Presso makes do with a 14-inch steel wheels setup finished in black while the VXI variant gets wheel covers. The S-Presso’s side profile looks a bit plain and is like a jacked-up Alto, to say the least.

Overall, in our subjective sense, it’s the Hyundai Grand i10 Nios that looks more enticing and easily win this part of our comparison.

While both the S-Presso and the Grand i10 Nios are slotted into the sub-four-metre category, the mid-level hatchback by Hyundai seems to trump the S-Presso in terms of dimensions. Be it the latest entry-level car from Maruti Suzuki in the last several years, the Maruti S-Presso measures 3665 mm long, 1520 mm wide, 1564 mm high along with the wheelbase of 2,380 mm. With its compact sizes, the S-Presso is exactly 140 mm shorter in length, 160 mm narrower than the Grand i10 Nios. Its wheelbase is also 70 mm shorter than the Nios’s 2450 mm. At 180 mm, the S-Presso also gets a smaller ground clearance as compared to the Nios’ 260 mm. However, with the height of 1564 mm, the S-Presso is essentially higher than the South Korean car by a small margin. In other words, the Hyundai car measures 3805 mm in length, 1,680 mm in width, 1,520 mm in height with the wheelbase of 2,450 mm. What is worth noting here is that the Maruti S-Presso is underpinned by the company’s fifth-gen Heartect Platform which also forms the balance of many Maruti Suzuki models. This platform ensures a high level of reliability and a rigid body structure for the S-Presso, making it compliant with any safety regulations. Whereas, the Hyundai Grand i10 Nios is based on an updated and modified version of the platform that also underpins the now-defunct i10. This platform also forms the base of the Hyundai Santro. With the new platform, the Grand i10 Nios becomes bigger and lighter than the previous models, rolling out a better ride quality as well as safety. If the new Maruti S-Presso looks a tad plain on the outside, things are more exciting on the inside of the vehicle. The cabin of the S-Presso boasts a premium sporty black colour theme along with some colour-coded orange bits and packs a wide range of features for greater comfort. The dashboard design of the S-Presso looks exactly similar to that of the Future S Concept. The digital speedometer and tachometer are placed at the centre while the touchscreen infotainment system is mounted right below it, reminding us about the Mini’s unit. The central AC vents are put on either side of the instrument panel. On the top-spec trim, S-Presso offers 7.0-inch SmartPlay Studio touchscreen infotainment system compatible with Apple CarPlay, Android Auto and voice recognition, manual air-con, multifunction steering wheels with voice and audio controls, rear parcel tray, 12V accessory socket, body-coloured ORVMs among others. Hyundai cars have been known for being versatile and feature-rich and that’s also the case of the Grand i10 Nios. For better driving pleasure, the Grand i10 Nios’s cabin has been completely redesigned for an upmarket and very premium use and look. Apart from the spaciousness, the Grand i10 Nios makes use of a lengthy list of electronic bits. In fact, the Nios is reported to get as many as 21 new features as compared to the old-gen Grand i10. The new contemporary dashboard layout impresses us with a semi-digital analogue instrument cluster, an 8.0-inch touchscreen infotainment system – quite similar to the one seen in the successful Hyundai Venue.

In fact, the instrument cluster of the Grand i10 Nios is an updated version of the SUV’s unit and offers a good mix of soft-touch materials and dark colour themes. Particularly, the infotainment of the Hyundai Grand i10 Nios is supported by Android Auto, Apple CarPlay and smartphone connectivity. Some other segment-first features on the Grand i10 Nios include two USB charging ports, drive rear-view monitor and wireless charging.

From this, the new Grand i10 Nios is the first connected hatchback in the segment and without doubts, it towers over the Maruti S-Presso with ease, not to mention a range of advanced features and an ample interior space on offer.

It could be a bit let-down on the Maruti S-Presso as only higher variants get airbags and safety restraint for both sides. Driver-side airbag, ABS, seatbelt reminders, speed alert and rear parking sensors are standard across the variants. The Hyundai car, on the other hands, gets one plus point with a host of standard safety kits including high-strength steel body, dual airbags, parking sensors, anti-lock brakes with EBD, seatbelt pre-tensioners, etc.

Powering the Maruti S-Presso is a BS6-spec 1.0-litre K10B petrol engine option that outputs 68 HP and 90 Nm of peak torque. Transmission options on the car comprise of a 5-speed MT and an AMT unit. This upgraded engine is set to make its way to the WagonR, Celerio and Alto K10 in the coming months. Interesting enough, the lower variants of the S-Presso gets an ARAI-rated fuel mileage figure of 21.4 kmpl while the higher versions deliver 21.7 kmpl. The Hyundai Grand i10 Nios is powered by two engines – 1.2-litre petrol making 83 HP/ 114 Nm and a 1.2-litre diesel burner good for 75 HP/ 190 Nm. Transmission choices also include a 5-speed MT and an AMT option. The claimed fuel efficiency of the Grand i10 Nios is 20.7 kmpl for the petrol-manual version and 20.2 kmpl for the petrol-AMT variants. The diesel engine is rated at 26.2 kmpl for both manual and automatic variants.

Two hatchbacks go in a different route. To pick up a winner, it’s the Hyundai Grand i10 Nios that keeps the S-Presso at bay. Still, the Maruti S-Presso has an edge over its rival in terms of pricing. The S-Presso is still a great car that’s worth considering, especially for those who’re setting out on the cost-effectiveness. 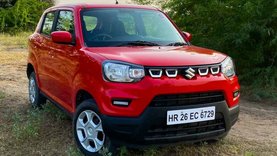