Maruti Suzuki’s upcoming entry-level hatchback, the S-Presso is already around the corner. While details of the new S-Presso are still scarce, it is suggested that the S-Presso will be slotted between the Alto K10 and the Maruti Celerio in the product lineup. Here's our detailed Maruti S-Presso vs Celerio comparison.

While the Maruti Alto twins have topped the sales chart of the entry-level cars segment over and over again, it isn’t hard to understand why Maruti Suzuki decides to move on gearing up for the introduction of a new entry-level model, the S-Presso. In fact, the elder duo, comprising of the Alto 800 and Alto K10, have been doing so great that none of its competitors can steal the limelight from the Maruti Suzuki’s offerings. Still, the Indian largest-selling carmaker feels that it’s high time to launch another budget-end car to spruce up buyer’s affinity in the on-going situation of a domestic sales slowdown.

That’s because some of Maruti entry-level hatchbacks like the Maruti Celerio have started to show its age in the hotly-contested competition. Besides, it is pretty clear that there exists a thin gap between the positioning of the Alto K10 and the Celerio in the company’s range. Therefore, in the final days ahead of the S-Presso’s launch, people are curious about how the S-Presso sets it apart from other Maruti Suzuki hatchbacks, including the Celerio. Hence, before we work on the detailed comparison of the S-Presso vs its rivals, let’s take an eye on our Maruti S-Presso vs Maruti Celerio comparison to figure out how these cars compare against each other on paper. While it’s a while away from the S-Presso’s official launch, Maruti Suzuki has started the testing and teasing game for its all-new model. Recently, the S-Presso was seen at dealerships, showing its willingness to come under the spotlight on this September 30. The upcoming S-Presso is built on the advanced Heartect platform which is light yet stronger than the current Celerio’s underpinning. As a result, the S-Presso gets a weight of 726 kg merely, much lighter than the Celerio’s kerb weight of 810 kg. It should be noted that the 2020 Maruti Celerio is now in the pipeline and various reports suggested that the new Celerio will be based on Heartect architecture as well.

In an effort to nullify the Kwid’s major advantage in the competition, which is its crossover-ish styling design, Maruti Suzuki decides to bring in a similar car in the same price bracket. Having said, the S-Presso will carry the SUV design cues, making it look more like an urban crossover than a conventional hatchback. Official sketch of the S-Presso released recently tell us that the S-Presso will carry forward the upright stance and some design elements from the Future S Concept which debuted at the Auto Expo last year. As said above, the Maruti S-Presso’s silhouette will take huge inspirations from the company’s lineup of SUVs, all the ways to reflect the car buyers’ modern lifestyles. The all-new S-Presso gets a squared-off front end with a high hood lip. The halogen headlamps merge into the sleek upper grille which reminds us about the Maruti Vitara Brezza. Even the angular chrome garnishes on the grille resemble those of the Vitara Brezza as well. Further, in keeping with the SUV theme, the LED daytime running lights are placed below the headlights while the front and rear bumpers are blacked out, going along with the black body claddings on the sides. Meanwhile, the Maruti Celerio gets a more conventional hatchback appearance. It’s a typical urban compact hatchback with a neutral package. The front fascia of the Celerio looks more stylish as opposed to those of the S-Presso. The front mesh grille looks prominent with a thin chrome strip connecting the outer ends of the headlamps while the fog lamps housings are sporty in an angular shape. The rear end of the car is wider and packed with elegant back door garnish, making for an exciting first impression. Unlike the S-Presso, the Celerio makes use of lavish alloy wheels, adding to the premium quotient of the vehicle. Since it carries the conventional hatch design philosophy, the Celerio misses out on some SUV-like design elements like a squared-off bumper, black body claddings, etc.

Also Read - Here's Why No Maruti Models Come With Sunroof Thanks to the first official pictures of the S-Presso’s interior, we are sure that this car retains the overall dashboard design from that of the Future S concept car shown at 2018 Auto Expo. In the production version, the Maruti S-Presso comes with an all-black interior theme along with some colour-coded orange cues on the top-spec models. It gets an upright dashboard that features a centre instrument cluster with digital speedometer and tachometer. Also, the new S-Presso is equipped with a Smart Play Studio touchscreen infotainment system as seen in 2019 Maruti WagonR. Both the centre console and the infotainment system are put in a large circular outline reminding us about the Mini’s unit. This circular enclosure is flanked by the central AC vents at both sides. The S-Presso might look plain on the outside, but it totally ups the game with a feature-rich interior package. The high-riding hatchback gets a similar steering wheel found on the WagonR while other notable features include steering-mounted telephony and audio controls, front power windows, manually-adjustable wing mirrors, a manual HVAC, USB, AUX inputs along with a 12V socket. When talking about the Celerio, we often mention the healthy in-car space the car gets on offer, albeit having a compact proportion. That’s supposed to be an advantage of the Celerio over the S-Presso as the latter gets a more compact size. The legroom and headroom at both front and rear are excellent. The seat cushioning is fairly good and the rear seat can accommodate 3 average-sized passengers comfortably. Compared to the S-Presso’s all-black colour, the Celerio is available with a dual-tone black-beige theme that looks bright and exciting. It comes with a centre instrument cluster but the touchscreen infotainment is given a miss.

The recently-updated Maruti Celerio is a safer car. It comes offered with a driver-side airbag, seat-belt reminder as standard across the entire range. Besides, the hatchback is offering ABS, passenger airbag as optional on all the variants. Maruti Suzuki also updated the Celerio with strengthened sheet metal, making it compliant with the pedestrian, offset, side-impact regulations.

Since the S-Presso is underpinned by the modern Heartect platform, it ensures reliability and structural rigidity that help the car comply with the new crash test norms. Besides, the S-Presso is also available with dual front airbags on the higher-end models while ABS, speed alert, rear parking sensors become standard on all variants.

The Maruti S-Presso will be the company’s first offering to come equipped with a BSVI-ready 1.0-litre K10B petrol engine option. This mill can be good for 68 HP of max power and 90 Nm of torque. Transmission choices on the new hatchback include a standard 5-speed MT and an optional AMT unit. Whereas the Maruti Celerio is currently on sale with a BS4 998 cc K10 petrol engine, also making 67 HP of power and 90 Nm of torque. The runabout is also available with a petrol-CNG option that delivers 58 HP and 78 Nm of peak torque. All the fuel variants can be had with a 5-speed manual transmission while the former can be bought with a 5-speed AMT optionally.

Maruti Suzuki cars have been known for being extremely cost-effectiveness and the same goes for the soon-to-be-launched S-Presso. Prices of the new entry-level car are estimated to sit at around Rs 3.25 Lakh and Rs 4.7 Lakh (ex-showroom). The Maruti Celerio is currently priced at Rs 4.26 – 5.43 Lakh (ex-showroom, Delhi). With this price range, the S-Presso is more likely to sit below the Celerio and above the Alto K10 in the lineup. Considering plenty of convenience and comfort features that the S-Presso might offer, it turns out to be quite a value-for-money car in the segment. Note that the Maruti Suzuki is also gearing up for a generation change of the Celerio, so let’s wait to see how the market changes in times to come. But till then, it looks like the newer of the two models would be the winner of our Maruti S-Presso vs Maruti Celerio comparison. 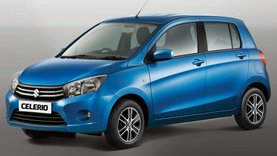