Maruti Swift vs Maruti Baleno: Which is the better option for you?

The Swift and Baleno are the flagship hatchback from Maruti. They are also the segment-leading hatchback with enormous numbers of sold units. The equal popularity of these two hatchbacks might confuse many Maruti fans.

The new Maruti Suzuki Swift made its debut at Auto Expo 2018, and launched in early 2018, while the Baleno’s recent comeback was two years ago. The new Swift is priced at 4.99 lakh, on the other hand, the Baleno which is slotted on the premium segment costs 5.36 lakh at least. Even though the two belongs to different segments, the fact that they are both hatchback and their prices somehow overlap makes them a potential pair of comparison.

In terms of dimension, as Maruti Swift and Baleno belong to different segments, they are considerably different in size. The Baleno which is of the higher segment is the bigger one. It measures at 3995mm, 1745mm and 1510mm in length, width, and height, respectively. The Baleno is 155mm longer, but the Swift is slightly 20mm higher. And the two shares the same width. Accordingly, at 2520mm, the wheelbase of Maruti Baleno is also 70mm longer. It also stands at higher ground clearance (170mm and 163mm).

Being on the same segment and the same manufactures, the two cars obviously share some common design elements. Admittedly, apart from the bigger size, the Baleno doesn’t look different from the Swift. Both of the cars all give the prominent to the curvy lines and share the vintage vibes.

On the front fascia, while the Baleno get the V-shaped grille with chrome accent, Swift has a larger curvy-border hexagonal grille. But the headlights looks quite similar with the curvy swept back shape. To the side profile, it is the Swift that will definitely stand out with its floating roof, highlighting the sportiness of the car. On the rear side, it seems that Maruti has taken the short leap of Copy and Paste with some minor tweaks.

With the greater larger length, the Baleno easily gets the upper hands in terms of interior space. Even though the Swift could not compare with the Baleno, it still offers some good spatial sense. The new Swift even grows greater than the previous version, giving it more space for the rear row. For the Baleno, its rear bench could comfortably accommodate three passengers, allowing a family of five to sit in. One more take-way is that the Baleno owns a greatly larger boot space of 339 litres while the Swift has a 268-litre cargo space. With such a significant gap in terms of boot space, the Baleno could serve better at long trip journey with a fully-loaded boot.

Unlike the similar exterior design, the interiors of the Swift and Baleno look distinctively different. The interior of the new Swift undoubtedly has the sporty feeling in its. It is obviously more relevant and futuristic and the Baleno. On the other hands, the Baleno is more mature and feels a bit more up-market than the Swift.

Noticeably, the top-of-the-range variants of the Baleno and Swift share the same display setting at the touchscreen unit.

Both of them share some similar exterior features, for example:

Inside the cabin, the two both gets techs, such as:

Maruti Suzuki Swift 2018 continues to use the 1.2-litre K Series VVT engine, which is shared with the Baleno. This engine could put out 82bhp and 115Nm. Both of the petrol version comes with the five-speed manual gearbox. However, the petrol Swift get another option of 5-speed AGS while the Baleno get CTV automatic gearbox.

The petrol Swift could return a slightly higher mileage of 22kmpl while the Baleno could pull out 21.4kmpl out of the same engine. Not only the petrol engine, Baleno and Swift also share the diesel engine which is the 1.2-litre unit that could make 74bhp and 190Nm. Both are paired with the standard 5-speed manual gearbox. While the Baleno diesel only comes with manual option, the Swift gets the additional option of 5-speed AGS, giving the Swift an advantage over the Baleno.

The Swift continues to show that it is better at fuel consumption as it has the higher mileage of 28.4kmpl. Whereas, the Baleno could reach 27.39kmpl at best.

Maruti Baleno, together with the bigger size, could offer a smooth riding quality. That’s why the Baleno could make a better family car than the Swift. The Baleno comes with a more composed and relaxing nature. It irons out the potholes and drives at a stable manner. And the cherry on top is the option of CVT gearbox, which could make for a smoother and easier driving, especially in the stop-and-go traffic in cities. In comparison with the ATM version on the Swift, it could bring out a more refined performance (but the price is higher as well).

>>> Maruti Suzuki Baleno Review 2018: What could the best-selling hatchback offer? 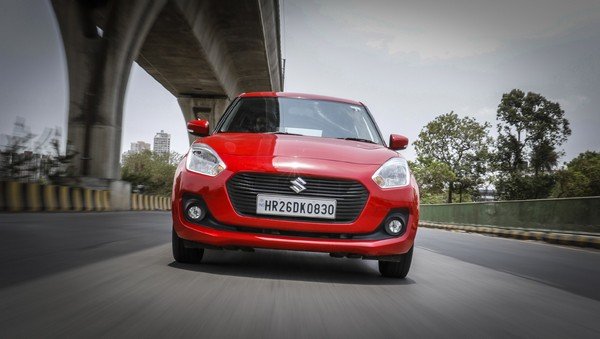 Maruti Swift has better handling than the Baleno

On the other hands, the Swift, even sharing the platform and engine, is tuned for better handling with a stiff suspension. Maruti Swift is better at handling and offers a more exciting drive. The downside is that there are still certain feels of thuds and bumps inside the cabin when tackling bad roads.

In terms of NVH, the Swift does edge out the Baleno as it is noisier inside the Baleno’s cabin.

As the Maruti and Baleno share many things in common, like the engine offer and transmission, as well as the platform, the difference lies in the purpose of your driving. For example, Maruti Baleno with the heftier price tag would bring you a more premium experience and larger interior and boot space, making it more desirable as a family car. On the other hands, if you could deal with a smaller room and prefer youthful look and enthusiastic driving nature, it is the Swift that you should go for.