2020 Mahindra Scorpio will be launched with a redesigned exterior that is similar to the flagship SUV Alturas.

The all-new Mahindra Scorpio will go on sale next year. It is expected to debut at the 2020 Auto Expo. First introduced 15 years ago, the Mahindra Scorpio is currently in its second generation. Ahead of its launch, the third-gen Scorpio has been spotted in carefully-wrapped camouflage for several times. Even though being covered up, it is quite certain that the new Scorpio will receive extensive updates in terms of the design. Third-gen Mahindra Scorpio looks more pronounced and bulky than the current model. It also bears resemblances with the flagship SUV Mahindra Alturas G4. We could expect the new Mahindra Scorpio to be more premium both outside and inside after the generation makeover. Looking at the front, it is easy to see that the Mahindra Scorpio will receive an Alturas-inspired grille with vertical chrome-garnished slats and the similar lower bumper design. Instead of the upright windshield on the current model, the third-gen Scorpio will sport a more inclined windshield. Most importantly, the new Scorpio looks substantially bigger, which could translate into a better interior room especially for the third row. Moreover, the interior of the new Scorpio, even though not captured on the new set of spy pictures, is expected to be comprehensively reformed with an all-new infotainment system, instrument cluster and higher quality seats. 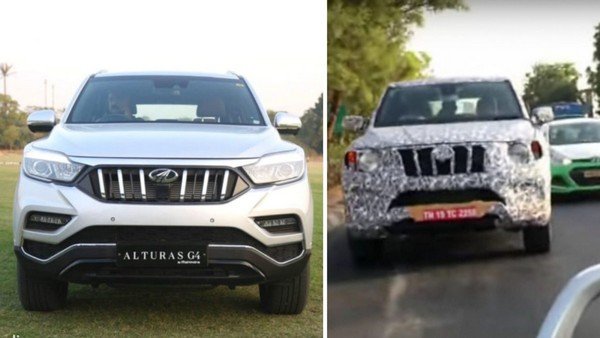 New Mahindra Scorpio is expected to get BSVI-compliant 2.0 diesel motor

The ongoing model of the Mahindra Scorpio is powered by a 2.2-litre mHawk diesel motor. This mill comes into two states of tunes, 120 PS/280 Nm and 140 PS/320 Nm. To the new generation, this motor will be replaced by a BSVI-compliant 2.0-litre diesel engine which generates the greater power output of 160 PS and 400 Nm. This engine would come with two options of transmissions, a 6-speed manual and a 6-speed automatic gearbox. The new-gen Scorpio might come with an all-wheel-drive system on selected trims as well.

What with the extensive interior and exterior updates, Mahindra Scorpio will become slightly more expensive. Currently, the Scorpio is priced from Rs 10 lakh to Rs 16.44 lakh. The new model of the Scorpio was conceptualized at Mahindra’s Technical Centre at North America while Chennai-based Mahindra Research Valley is responsible for the research and development of the new-gen SUV. To find out more news and updates of all models in the market, check out IndianAuto.com