Exterior of the 2021 Ford Bronco Sport has leaked ahead of its official unveiling, and it is expected to be unveiled alongside the regular version

Ford has a long legacy of producing some of the most potent and capable SUVs and pickup trucks for the American market. Ford Bronco was one of those few successful-capable 2-door SUVs. It was, however, discontinued and replaced with more modern and niche products. A couple of years back, a rumour floated around the internet that the Bronco nameplate will be resurrected in all its glory. The Bronco gets a thorough-bred SUV stance.

In line with this, a unit of the 2021 Ford Bronco Sport has been spied recently. We have earlier reported of Bronco test mules being spotted on the international tarmac, but the car has been now spotted in its production-spec avatar. The Sport suffix following the Bronco nameplate hints that it will be offered in two different sizes. The one seen here in the pictures is the smaller one. In terms of design, it gets a large-wide front grille that holds the ‘BRONCO’ badge in bold font as seen on the last-gen F-150 Raptor. On the sides, it boasts a thorough-bred SUV stance with a 2-box silhouette. The rear is also smartly done and is in conjunction with the front facet of the car.

Also Read - Next Generation Ford Endeavour Spied Testing For The First Time Ever. 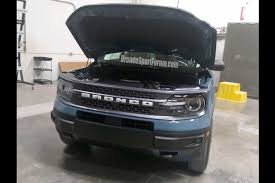 The Sport suffix hints that a bigger version of Bronco will also be unveiled alongside the Bronco Sport.

The Ford Bronco Sport has been under developments for almost 2 years now and it looks like it is ready to be unveiled alongside its bigger sibling, which will sport ‘Bronco’ nametag without the ‘Sport’ suffix. The Ford Bronco Sport is expected to go on sale internationally in the second half of 2020 to compete with the likes of Jeep Renegade, Fiat 500X, Subaru Crosstrek, and more. However, expecting this lifestyle product to make its way to the Indian shores should be avoided, since Ford is currently planning for mass-markets products for our market. Also, the Indian audience has a really low affinity for petrol-powered lifestyle SUVs. Thus, the American carmaker will not consider the Bronco for the India.