Honda CR-V Petrol or Diesel: Which one is most suitable for you?

This is the first time ever that a CR-V will come with both petrol and diesel engine. To help you make the right buying decision, we will pull out the pros and cons of each option. Let's find out!

As we all know, with the fifth CR-V to debut this year, it is the first time for Honda CR-V to have the diesel engine. This virtually puts the CR-V potential customers into the hard decision of what engine to buy: Diesel or petrol? IndianAuto will give you the necessary information so you can decide for yourself.

First of all, let’s take a look at the specification of each engine option and how they differ from the other.

1. Honda CR-V Petrol: Why you should buy the petrol version?

Honda CR-V has always packed with petrol until the fifth generation. To this all-new CR-V, the petrol engine will be a 2.0-litre unit with the power output of 154PS and the torque of 189Nm. This engine is paired with a CTV gearbox.

With the massive weight of 1545kg, the power outlet is sufficient to perform decently. The power delivery is linear. The midrange is where it could pull out a strong surge of power, making it ideal for city commute. One difference between the petrol and diesel engine is that the petrol has to deal without the third row. Even though it means that you will not have as many seats as in the diesel version, it will optimize the second row for even better space with ample legroom and headroom. Along with that, the cabin will also benefit with more space for luggage. So if you don’t have the need for a large seating capacity, you can opt for the petrol engine for more space.

2. Honda CR-V Diesel: What is offered on the newly-added diesel version of Honda CR-V?

We have never experienced a diesel engine in a CR-V before. What could it feel like to drive one? First of all, let’s see what the engine specifications of this engine are.

The diesel version is powered by a 1.6-litre oil-burner. The power output stands at 120PS and 300Nm. The transmission is a 9-speed automatic gearbox. Compared with other competitors like the Hyundai Tucson and Skoda Kodiaq, these aren’t really impressive enough. With the fifth generation, Honda will introduce the first diesel version ever on the India-spec CR-V

Apart from the engine itself, the diesel version will also weigh more. It is offered in both 2WD and AWD version. And the best part must be the third row which will allow more people to get in the car. However, as we have mentioned, the third row will more like an added unit, which will most suitable for children. Adults will not have a good time squeezing at the back of the CR-V seven-seater. 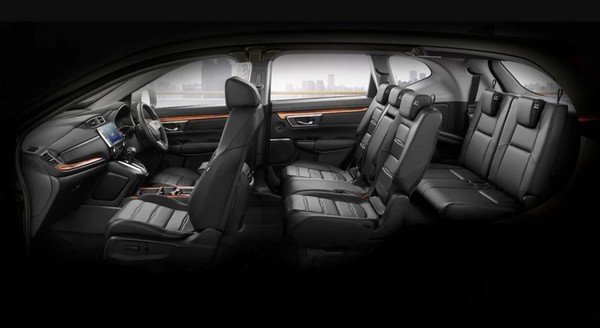 If you are in a mood for a surge of adrenaline when push throttle, you should put the diesel CR-V in the Sports mode. Otherwise, you will mostly find it calm and compliant. The Sports mode is also a good company when you hit the highway. Especially with the diesel AWD, you can find excellent corning and good handling. For the 2WD, it is given a lighter weight of 1666kg, allowing a better power-to-weight ratio.

Also remember that the eighth gear is only engaged once you pass the 110 kmph and hence, the ninth gear is accessible when you go beyond 135 kmph.

On the safety front, both diesel and petrol version will get the same package of ABS with EBD, six airbags, vehicle stability, hill start assist along with rear parking camera and lanewatch camera. Read more about fifth-gen CR-V feature offer here.

Honda CR-V Variants: What Will Be Offered On The Fifth-gen CR-V?