0 0
Maruti Suzuki is reported to sell its upcoming new models including the new Maruti Vitara Brezza via both the standard Arena and premium Nexa dealerships and even under the Toyota badge.

The Indian largest auto manufacturer is starting to implement a new product strategy: to sell its new vehicles via Arena and Nexa dealerships. Since automakers are searching for ways to decrease the development, production costs and the lead-time, new partnerships have recently emerged. One striking example is the partnership between Suzuki and Toyota. 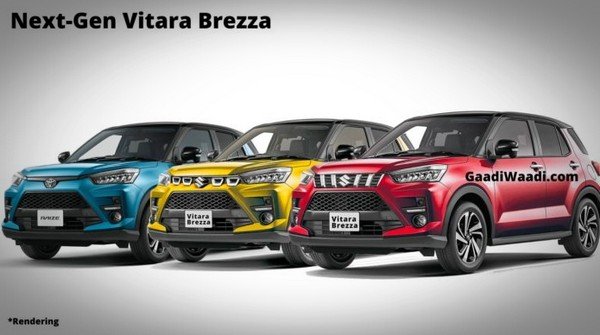 The 2021 Maurit Vitara Brezza will be available in three versions: Nexa, Arena and Toyota.

The new strategy is to focus on the development of new vehicles at a lower price range, which can help the companies introduce new cars on time to satisfy the increasing customers’ demands. Considering the fact that a new model can become outdated in a few years’ time, one of the greatest challenges that all the carmakers are facing is to keep their models up to date. Maruti Suzuki has decided to adopt the method of launching “one such product with two versions every year”. This also helps the automaker effectively compete against its rivals in terms of technologies.

This strategy has been implemented on the Maruti XL6 which is based on the Ertiga and went on sale less than a year after the new generation of the latter was launched in late 2018. Furthermore, the first Maruti vehicle was sold under Toyota’s badge in mid-2019.

The Maruti Vitara Brezza is also reported to follow the same strategy. The new generation of the compact SUV will be launched in 2021 and will be retailed via both Nexa and Arena with the former getting more upmarket features. This seems to be a wise strategy since while a new variant would require an investment cost of INR 200 - 250 crore, this amount for a new model is up to INR 900 - 1,100 crore.

The cars which are smaller than the Ignis will be excluded from the strategy but images of a slightly upscale variant of the Wagon R have recently released. The new version of the Maruti Vitara Brezza will be manufactured at Toyota’s factory in the Karnataka whereas the Toyota badged vehicle will be launched in the foreseeable future.