Honda revealed the 11th generation Civic in near-production form and is slated to launch in India in 2022. Read on below for further details.

Honda has had the Civic nameplate in production for nearly 50 years now and the old Civic was quite popular in India as well. After a hiatus of six long years, the Honda Civic made a comeback at the 2018 AutoExpo followed by the launch in March 2019, and currently is the best-selling executive sedan. Now the Japanese automaker has unveiled the next-gen Civic prototype, and the production version should launch in India by 2022. The prototype is a near production-ready preview of the eleventh generation of the Civic and now looks a close sibling to the Honda Accord sedan instead of going in a different design direction. The all-new Honda Civic will launch in North America in 2021 with the sedan variant followed by the hatchback, Si, and the performance-spec Type R versions. The new lower positioned front-end gives the sedan a wider stance and features horizontal grille slats in black, sleek-looking headlamps with LED DRLs, and a redesigned front bumper with black accented air intake.

You get a brand-new bonnet, sharply raked windscreen, black alloy wheels, C-shaped black bumper garnish, and a lower beltline with cleaner shoulder lines over on the side profile. Coming to the rear, you get inverted L-shaped LED taillights, oval-shaped dual black exhaust outlets, and a larger greenhouse which ensures a more spacious cabin with the coupe roofline. The Honda Civic prototype gets a new paint scheme which is called Solar Flare Pearl and it will one of the colours available in the palettes when it enters production. 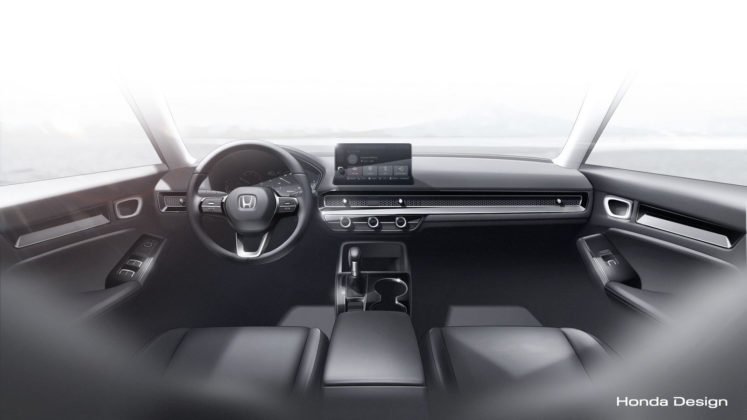 Honda didn’t show the interior of the prototype, releasing a design sketch instead. The cabin comes with a nine-inch touchscreen infotainment system, digital instrument cluster, honeycomb mesh pattern on the dashboard, rotary dials, and chrome accents. You will get even more features with the new safety tech from Honda’s Sensing Suite, it is built on the new Honda Advanced Compatibility Engineering body with improved collision protection. The current powertrain lineup is likely to continue over to the new Honda Civic with a 2.0-litre motor developing 158 PS, a 1.5-litre turbo with 174 PS, the 1.5-litre Si with 205 PS and 306 PS developing 2.0-litre turbo in the Type R.