The first accident of a Tata Altroz has recently been reported, and it happened with a Maruti Swift, one of India’s most popular hatchbacks.

India has one of the highest numbers of road accidents in the world. In 2018 alone, there were upwards of 1-and-a-half lakh road accidents in our country. Here, we have a story of a recent accident, involving one Tata Altroz and a Maruti Swift. It should also be noted that this is the first reported accident of the former, as the car has only recently been launched in India. 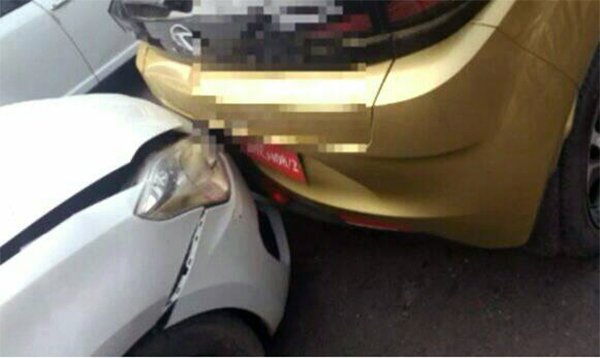 In the picture above, you can see a gold-coloured Tata Altroz, which has been rear-ended by a white Maruti Swift. The damage appears to be minimal, which probably means that both the cars were moving at relatively low speeds. The rear bumper and number plate of the Altroz has been deformed by the impact, but the rest of the car seems unaffected. As for the Swift, it has suffered minimal damage at its nose. The front bumper and the hood of the car have both come loose, but the rest of the car seems undamaged. It would be wrong to judge and compare both cars in this context, as there is minimal information available about the incident in question. The only confirmed details are that occupants in both the cars are safe. Tata Altroz, you might be aware, is a recent entry into the Indian car market. The car briefly held laid claim to the title of ‘Safest Indian Car’, although that title now belongs to the Mahindra XUV300. The Altroz had managed scored to score a 5-star safety rating for adult occupants and a 3-star rating for child occupants in Global NCAP crash tests. This is quite an impressive score, and the Altroz currently stands near the top of the list of safest cars made in India, and is the safest hatchback manufactured by an Indian carmaker.

The Altroz is built on Tata’s modular ALFA (Agile Light Flexible Advanced) platform, which also underpins the Nexon SUV. The premium hatchback also features the homegrown car manufacturer’s ‘Impact 2.0’ design philosophy. The car is available with two engine options- a 1.2-litre naturally aspirated petrol unit and a 1.5-litre diesel one. There is currently only a 5-speed manual transmission available here. There are reports that there is a 1.2-litre turbo-petrol and a 7-speed dual-clutch automatic gearbox will be offered on the car soon. Currently, the Tata Altroz is available at a price of Rs. 5.29 lakh and 9.29 lakh (ex-showroom, New Delhi).