Tata Tigor Electric will be available for both private buyers and cab companies. With the range of 213 km, this hatchback will make a proper city car.

Tata Motors has prepared a carefully-designed plan for entering the fledgeling EV market in India. This ambitious plan will start with the launch of the Tata Tigor electric version. From the start, Tata Motors will offer this model for both individual buyers as well as cab companies. Notably, Tata’s latest EV will feature eye-catching specifications including a range of 213 kilometres. Thanks to the tax benefits endowed by the Indian government for the EV segment, the low-end variant of this car has been priced at only Rs 9.44 lakh. At this price point, the Tata Tigor Electric is cheaper than many top-spec variants of its fuel-powered compact sedan counterparts including Maruti Dzire, Honda Amaze and Hyundai Xcent. 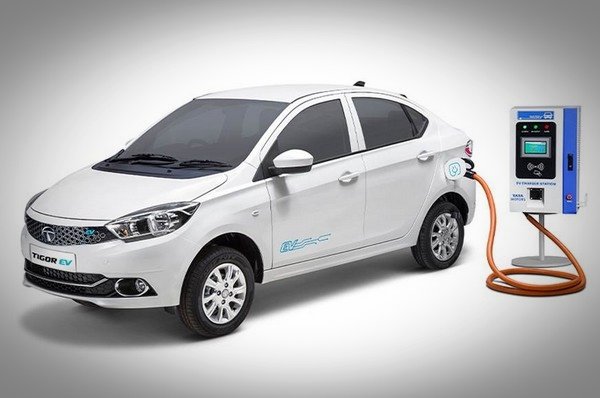 Tata Tigor Electric is priced attractively at only Rs 9.44 lakh

With regard to the exterior aspects of the Tata Tigor Electric, this vehicle is equipped with a revised front grille, alloy wheels, new decals, and shark fin antenna. There are three exterior colour options on offer, Egyptian blue, Pearlescent white, and Roman silver. Inside, the interior carries features which include multiple drive modes and a Harman audio system. It is fully equipped in terms of safety with driver-side airbags, ABS, speed warning, seat belt reminder, rear parking sensors being provided as standard features across the range. The top-spec variants will come with dual front airbags. The Tata Tigor Electric is also available with both fast and slow charging option. With a range of 213 km, this electric sedan is made majorly for city driving. Booking for the Tigor Electric has commenced and the delivery is expected to follow soon. Besides the electric option, Tata Tigor will continue to be offered in both petrol and diesel options. The price range of the Tata Tigor starts at Rs 5.6 lakh (ex-showroom).

Get latest car updates at IndianAuto.com.