5 Most Excellent Seven-Seaters Under 20 Lakhs

Indian people have the tendency to have big families and it is not unusual to want to purchase a 7-seater car to accommodate the whole family.

7-seaters are highly favoured in India. They are big enough to provide sufficient seatings and space for a big family. With the not-so-good road condition with numerous potholes and countless roadblocks, big 7-seat cars provide a relatively more stable ride than smaller cars. The high placed seats in 7-seaters also give the driver and passengers inside the car a better road view. These cars are even more loved because of their well-equipped cabin and power-packed performance. Generally speaking, 7-seat cars are more expensive than regular sedans and hatchbacks, but there are some pretty decent 7-seaters that do not break the bank. Here are top three 7-seaters in India that cost less than 20 lakhs.

Toyota Innova Crysta is an MPV, which was designed to be the heir of Toyota Qualis and was first released as Toyota Innova on the Indian market in 2005. Toyota Innova turned out to be a huge success and has dominated the segment since its introduction, is one of the best-selling 7-seaters in India. This car is the epitome of 7-seaters as it has all the reasons why people go for 7-seater cars: roomy cabin, spacious trunk, great stability, and power-packed performance. With all of these advantages, it is no surprise that Toyota Innova is one of the highest selling 7-seater cars.

In 2016, Toyota Innova received a major makeover and was renamed Toyota Innova Crysta. The exterior and interior changes made the car look bigger, stronger, more sporty, and overall more beautiful. The makeover in 2016 also gave Toyota Innova Crysta a big update in terms of features. There is a massive 7-inch touchscreen infotainment system, a DVD player, and a 4.2-inch multi-information display. Some other highlights include 20 in-car bottle holders as well as second-row and third-row air conditioners. In addition, Toyota Innova Crysta boasts a range of safety features, which include three airbags and anti-lock braking system with electronic brakeforce distribution. With the comfort provided by all of these features, you and your family sure are going to have a nice, pleasant, and safe ride in this car.

Toyota Innova Crysta comes in a total of 18 variants, each with a different choice of engine, transmission, and mileage. 12 out of 18 variants cost less than 20 lakhs and if you plan to purchase this car, you are up for a good comfy ride. You can always count on Maruti Suzuki to make an affordable vehicle and this time, the car manufacturer does not fail you (as always) and comes up with the most affordable seven-seat car on the market, Maruti Suzuki Ertiga. With the price ranging from 6.76 lakhs to 10.95 lakhs, Ertiga costs even less than many four-seaters and five-seaters.

Maruti Suzuki Ertiga is a compact MPV that was introduced in 2012. Because it is a compact car, the cabin space of Ertiga is not as great as that of other cars. Nonetheless, it is still able to suffice the needs of a family of seven or below. The first two rows are quite spacious and they would be more pleasant to adults, while the third row has less room and is more suitable for children. Moreover, there are a few seating and luggage options available, so you can choose one that suits your needs the most.

Despite the low price, Maruti Suzuki Ertiga has some amazing features. All diesel variants come with anti-lock braking system. Most variants are also equipped with a rear air conditioner. The best variant, in our opinion, is the V variant, because it has electric mirrors, keyless entry, fog lamps in the front and rear, and a decent speaker system.

No one could figure out how Maruti Suzuki can put out an MPV of acceptable quality at such a low price while most manufacturers have to cut corners, but come what may, Ertiga is a good entry-level 7-seater for someone who is looking for a family car but does not have a big budget. Another exciting news is that a new version of Maruti Suzuki Ertiga will be released in late November and it promises major updates in both the exterior and interior of the car. 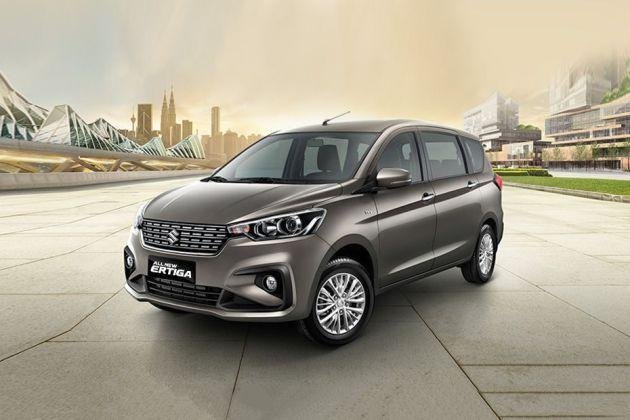 Just like Toyota Innova Crysta, Honda BR-V is a successor of another model. BR-V is the heir of Honda Mobilio and an ace of Honda in the 7-seater segment. Honestly speaking, Honda BR-V is one hell of confusing car. If you look at it from afar, you are likely to mistake BR-V for an SUV, but then it drives like a sedan and has seven seats like an MPV. Different people might call it different things. So, for the sake of simplicity, let’s just say BR-V is a crossover.

Honda BR-V has the standard “Honda look” that the brand calls “Active-Solid Motion” design, which allegedly blends sturdiness with agility, and robustness with resolution. This car is a crossover, but it has the look of an SUV that most people love, so it is a plus for BR-V. The Japanese car manufacturer has the philosophy of “Man Maximum, Machine Minimum” when it comes to car interior design, so if you are a fan of big cabin space, you may want to look into BR-V.

To keep the passengers safe, all Honda BR-V variants are built with ACE body structure that enhances self-protection in case of collision and is equipped with dual airbags for the front seats. Most variants also come with anti-lock braking system with electronic brakeforce distribution, rear parking sensors, security alarm, and impact-sensing auto door unlocks.

The performance of this car is pretty decent. Both ride quality and handling are great, and manoeuvring around the cities is as easy as pie and as smooth as silk. BR-V may look like an SUV but the driving experience is no different from that of a sedan or hatchback. So if you are someone who has driven a sedan before, there is no need to worry that you have to learn how to drive the BR-V. But if you move from a true SUV to Honda BR-V, well, there is some surprise and learning waiting for you. Since Mahindra Scorpio was introduced in 2002, the SUV has maintained its popularity despite various new cars coming to the market every year. Though the engine and some features have been updated and added to Mahindra Scorpio over the years, the design of the car remains somewhat unchanged with the same chunky and thick body. If you love retro-looking cars but still prefer the performance of the most advanced and modern technology, Mahindra Scorpio is just the perfect car for you.

To keep up with other cars and appeal to customers, Mahindra Scorpio recently got some interesting added features, which include reversing camera with a touchscreen infotainment system, adaptive guidelines, roof-mounted sunglass holder, auto headlamps, and rain-sensing wipers. You can also get a full range of safety features if you decide to purchase a Scorpio, some of which are airbags, anti-lock braking system with electronic brakeforce distribution, auto door lock, and rear defogger.

Compared to other cars on this list, Mahindra Scorpio has a ride quality that is not great. However, the car can stand through some abuse, and the mHawk turbo diesel engine provides great performance and fuel economy. Renault does not sell very well in India, but nonetheless, Renault cars are great to try out, that is if you focus on performance and are willing to drive a not-so-appealing-looking car.

Renault Lodgy is a great option for you if you frequently have to give senior family members, pets, or children a ride because the car has a low floor, big doors, and high ceilings. Big and tall folks will appreciate this MPV too as the headroom is almost impossible to touch and the cabin space is massive. However, if you plan to own and drive the car and you are on the smaller side, please think twice because the driver seat is HUGE. And like most other European cars, you can rest assured that Lodgy can endure some bumping and abusing.

To keep you and your family safe, there are dual airbags, anti-lock braking system with electronic brakeforce distribution, auto door lock, and rear defogger.

The engine of Renault Lodgy is refined and fuel-efficient, and it provides great handling and superb ride quality; just what you would expect from a European car.