Read on to discover a list of the most luxurious cars of 11 female Bollywood stars.

The 12 ladies we are going to introduce below are the most successful female stars in Bollywood. Apart from their super high acting fees, they also earn quite a lot from other products as well. So it is not surprising that they possess exorbitant cars. Below is the list of 12 most luxurious cars possessed by these beautiful ladies. We would like to arrange the cars from the most expensive to the least one for your convenience of reading.

Priyanka Chopra is the only Indian actress to possess a Rolles Royce car. Basically being a mini-me Phantom, her Rolls Royce Ghost has a starting price of INR 5.25 crore. Under the hood of the Ghost is a 6.6L twin-turbocharged V12 petrol motor which can deliver 562 bhp of maximum power and 780 Nm of peak torque. The transmission duties are undertaken by an 8-speed AT gearbox. Priced at INR 5.01 crore, Mallika Sherawat’s Lamborghini Aventador is the fastest car in the list. Thanks to a 6.5L V12 motor with a maximum power output of 690 bhp, the car can reach a speed of up to 349 kmph. Anushka Sharma is believed to prefer to regularly use only one car in a long period of time. Spotted many times in the Vogue, the vehicle seems to be her favourite one. Anushka Sharma’s Range Rover Vogue receives the power from a 4.4L V8 diesel motor which can deliver an impressive power/torque figures of 335 bhp/740 Nm. Another Bollywood actress to own a Range Rover Vogue is Katrina Kaif. She recently bought a white Diesel LWB Vogue SE, which is priced at INR 2.33 crore In Alia Bhatt’s impressive luxury car collection, the Range Rover Vogue is the latest and the costliest one. The car costs around INR 1.74 crore. Powering the Vouge is a 3.0L V6 motor which can deliver 240 bhp against 600 Nm. The power is sent to the four wheels through an 8-speed AT gearbox. 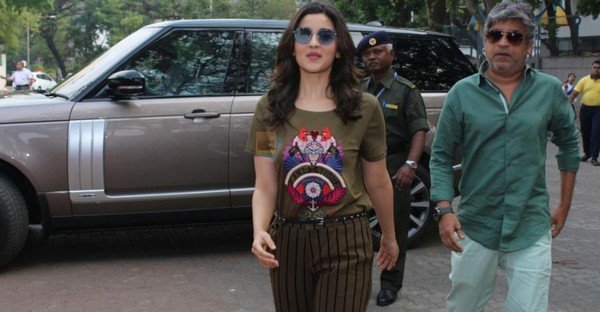 Another Bollywood star owning a Range Rover Vogue is Malaika Arora Khan. Her Vouge has the same price and power/torque output as that of Alia Bhatt, but different in colour with a dark blue exterior paint scheme all over the car body. The Range Rover Vogue is also the beloved vehicle of Kareena Kapoor. She owns an earlier-gen Range Rover Vogue, which costs around INR 1.74 crore in India. She has been spotted driving the Vogue many times. The Range Rover Vogue seems to be a popular vehicle with many Bollywood actresses. The last Bollywood female celebrity in this list to own a Vogue is Jacqueline Fernandez. Like that of Kareena Kapoor, Jacqueline Fernandez’s Range Rover Vogue is also an earlier-gen model, but with a sporty body kit, which gives a more fashionable appearance to the vehicle than the normal version. Another well-known beautiful actress for not only her acting skills but also her expensive car is Deepika Padukone with a Mercedes Maybach S500, which is priced at INR 1.67 crore. It was imported to India through a Complete Knocked-Down Unit and assembled here. The car is powered by a 4.7L motor which has power/torque output figures of 453 bhp/700 Nm. Sunny Leonne’s blue Maserati Ghibli is a Nerissimo Edition priced at around INR 1.42 crore. What makes this vehicle unique is not its price, design or motor, but the fact that only 450 units of the special Nerissimo version of the Maserati Ghibli have been built. The latest-gen Mercedes S-Class, in the S500 format, is the favourite vehicle of the former Miss World Aishwarya Rai. The vehicle is the most powerful sedan in Mercedes lineup. It receives the power from a 4.7L petrol motor with the power and torque figures being 453 bhp and 700 Nm, respectively. Sonam Kapoor’s Mercedes S-Class is the gift from Anil Kapoor. The vehicle is in the S400 format and costs approximately INR 1.28 crore. Powering the S400 is a 3.0L V6 motor which is good for 333 bhp against 480 Nm and is coupled with a 7-speed AT unit. Above is the list of the most luxurious vehicles owned by 12 famous Bollywood female stars, who are not only known for their acting skills but also their possessions, which are showcased in their cars.