42 0
A Ford Endeavor has been given a special iridescence chrome wrap that catches the eyes of everyone on the road.

The Ford Endeavour is best known for its robust appearance that must be one of the most macho SUV designs in India. The Endeavour is cherished by many car enthusiasts. This model is particularly popular in the world of modified cars. IndianAuto has already introduced some modified Endeavours to you in the past. However, none of them are as colourful and splendid as the one we are about to show you.

Before adopting the new car wrap, the Ford Endeavour had a bright neon green wrap covered over this body. The stock colour of the car reveals as the neon green wrap is peeled off. As it turns out, the car is originally white. On the other half of the video, we will see the modifiers putting a glossy illuminating wrap on the Endeavour. Neon green and now a chrome wrap, it seems that the owner of the car never settles for anything less than striking.

This custom project is done by GS Customs Indian, a car custom garage based in Pune and Guwahati. The wrap, as revealed in the video, is Ammolite Gem Neo from Techwrap. Apart from the glistering chrome wrap, the Ford Endeavour also gets black stripes running vertically on the front bonnet and black wrap covering the top. This combination tones down the luminous look of the chrome car wrap and adds sportiness to the design. The wrapping is neatly done with high precision. 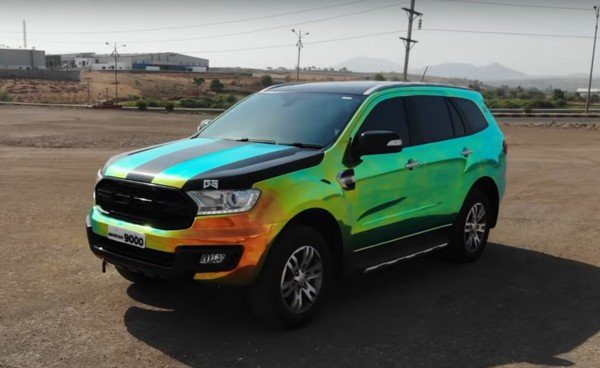 The new car wrap, without a doubt, will capture the attention of every passerby. It is hard not to glue your eyes to such a beautiful car. Under the sunlight, this car definitely stands out. It might cast a doubt on you whether or not this attention-grabbing car wrap is illegal. By far, there is no regulation ruling out any type of car wrap in India, which means the luminous Ford Endeavour could run freely on roads without being pulled over by the cops because of its unique wrap.

Currently, Ford Endeavour is on sales in India market at the starting price of Rs 28.19. The top-spec variants could be priced up to Rs 32.97 lakh. It comes with two diesel engine options, a 2.2-litre turbocharged diesel unit and a 3.2-litre five-cylinder diesel unit. The former is able to make the maximum power of 160 PS and the peak torque of 385 Nm while the latter is good for 200 PS and 470 Nm. Ford Endeavour is competing with the Toyota Fortuner, Skoda Kodiaq, Isuzu MU-X and Mahindra Alturas G4.

IndianAuto will bring you the latest car news and interesting car stories, visit to see more.