Petrol vs Diesel: Which one is better?

If you are wondering what version to buy, diesel or petrol, read on to find the most suitable option for you.

Most of the car manufacturers would offer two engine options: petrol and diesel engine. When buying a car, you are practically put in the position where you have to choose between the petrol and diesel engine. If you are a beginner in the automobile world, it would be quite overwhelming to tell these two options apart. That's why IndianAuto will sort out the differences between the diesel and petrol-powered cars so that you can make a suitable decision.

What is the main difference between diesel and petrol cars?

Petrol cars mix fuel with air and utilize the spark plug to start the combustion. But for diesel cars, only fluid is pressed in the chamber to create combustion. It is the main feature that differs diesel engine from petrol engine. 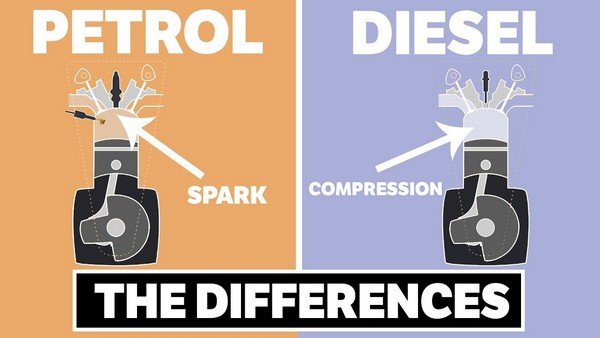 How diesel and petrol engine work

Here are some criteria that could help you to make the decision:

Diesel variants are usually available at higher prices than petrol options. It is because diesel engines are more complicated and cost more to produce. Along with the official price, you also have to pay more for the on-road price to have a diesel car, as diesel vehicles usually require higher charges for registration.

The gap in the official price of diesel and petrol model ranges from 1 to 1.5 lakh. Plus the on-road price could up to 3% of the original price. Altogether, they would be a huge difference. The gap doesn’t end at the purchasing stage. It is even extended as diesel motors usually require higher maintenance cost. The cost of engine oil or spares is higher for diesel engine than petrol cars.  And owing to the complexity of the diesel engine, it also takes more money to fix the engine when problems arise.

But for those who aren’t likely to have a long-term relationship with any car, it would be better to buy a diesel car as the resale price of diesel is often higher than petrol cars.

So even though diesel costs more in the purchasing stage, the diesel engine is more economical in the long term due to its higher fuel efficiency. Diesel car’s mileage is apparently higher than petrol car as it has a more efficient compression and does not require a spark plug.

Moreover, as the mileage of diesel engine cars is higher than petrol cars’, diesel car owners don't have to spend time visiting the gas station, which will save them a lot of time. However, it also comes at a price – diesel cars produce more noise and vibrations than petrol cars. In higher gear, it delivers more of this trait. This actually adds more excitement for driving, which explains why many people love the feels of strong engines from diesel cars. But for others, it is still a bother. The good news is, in the recent models of diesel engines, this weak point has been increasingly improved.

On the other hand, petrol-based cars give a smoother driving experience with a light clutch and easier gear.

A diesel engine is the number one choice when it comes to highway driving. Petrol cars, on the other hands, are more suitable for city driving as they are more responsive, easier to control in the stop-and-go traffic of the city.

If you drive mostly on the highways or for a long distance, you obviously should choose diesel-powered cars. It will be reasonable in terms of cost saving as a diesel car could save a deal on fuel for long-distance drives. Plus, it does feel easier to rev up because diesel car requires fewer gear changes than petrol. Or, if your driving concerns much with towing, diesel engine could do the job much better. A diesel engine is more suitable for highway cruising while petrol engine is the good choice for city drive.

Some people hope that the fuel efficiency could make up for the initial cost. But if their car is mostly used to daily commute around the city, their plant is on the verge of collapse as covering cost is unlikely to happen in six or seven years with such short-distance drives.

Choosing between diesel and petrol engine might be an unavoidable step in the car-buying process. You have to well-consider many factors, like the economic reason, driving purpose, and personal reference, in order to make the right decision.

The differences between a diesel engine and a petrol engine