55 0
The all-new Hyundai Sonata has been revealed with imposing revised styling prior to New York Auto Show.

Ahead of the upcoming New York International Auto Show held between April 19 and 29, 2019, Hyundai has released a set of new images for its eighth-generation Sonata giving out the first inside-out glimpse of the brand new sedan for enthusiasts. Taking a slew of influences from the Le Fil Rough Concept premiered at 2018 Geneva Motor Show, the 2020 Hyundai Sonata shows off a new sportier design language with a four-door coupe-like silhouette. The sloping roofline is radical while the LED daytime running lights appear to form a strip running all-way up to the base of the windscreen. Windows are accentuated in chrome surrounds running alongside the outer edges of the bonnet that increase the premium quotient of the luxury sedan. The fog lamp clusters are wrapped around by a strip running below the cascading grille with horizontal slats that make it a sharper and sportier car ever than the outgoing generations. 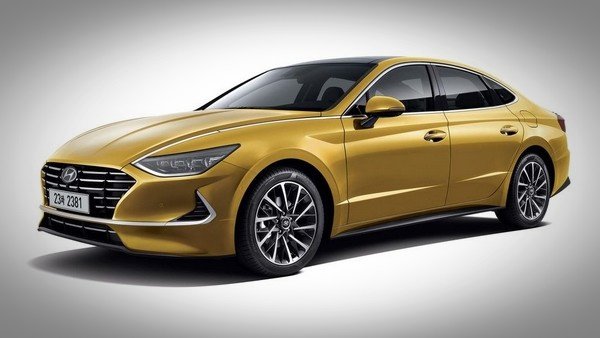 Bigger proportions are spotted in the official pictures of the new Hyundai sedan with 45 mm longer, 25 mm wider and 30 mm lower than the previous generation. The wheelbase has been extended by 35 mm as well which is drawn heavily from the Le Fil Rouge concept debuted last year. Like its gorgeous-looking exterior, the new Sonata interior is intensively inspired by Stealth aircraft and accommodates a high-end infotainment touchscreen along with neatly-crafted AC vents. A large multi-information display and a multi-function steering controls are also integrated inside the vehicle. To further escalate the intelligent handling, the new-gen Hyundai Sonata utilizes a digital key operated through a smartphone application so as to lock and start the vehicle just by a single touch on the phone screen. For the moment, details on the powertrain system of the all-new Sonata are yet to be revealed so it is not certain to confirm whether the Hyundai Sonata could adopt hybrid technology or not. If so, the 2020 Hyundai Sonata might stack up against the likes of Toyota Camry or Honda Accord in the global space. In our country, the Sonata has been pulled off from the production line since 2015 owing to the absence of diesel motor option. There is still no official statement about the India launch of the 2020 Hyundai Sonata but we can expect it to hit the dealers by 2020. Further details on the sedan will be disclosed in April at 2019 New York International Motor Show and sales would be commenced in the global markets during the second half of 2019.

Next-gen Hyundai Grand i10 Will Get An Automated Manual Transmission