9 0
The latest reveal from Tata Motors makes Tata Harrier one of the biggest cars in its class. Let's compare its dimensions with others to get a better picture.

The official launch of the much-awaited Tata Harrier is just round the corner. Ahead of its launch, Tata Motors has been kept us on edge of our seats by giving us constant hints on their new SUV. And recently, Tata has unfolded the dimension specs of the Tata Harrier, revealing it to be one of the largest cars in its class.

Let’s take a look at the dimensions of the Tata Harrier and compare these with other rivals’.

Underpinned by the same platform on the Discovery Sport, Tata Harrier features the same width and wheelbase length. However, the Harrier reduces the length and the height by 2mm and 10mm. What’s more, the Harrier sits on tyres with sizes from 235/70 R16 to 235/65 R17.

Compared with the concept car of the Harrier, the H5X, displayed at the Auto Expo 2018, the production version is actually larger. While the H5X sports an impressively large wheel of 22-inch, the Harrier runs on much smaller wheels whose size is downsized to 16 and 17 inches. It is a step down for its street appearance. But considering the high cost and the loss of ride comfort with huge tyres, it is understandable why Tata keeps the Harrier’s tyres at a modest size.

Tata Harrier: What Are The Differences Between H5X Concept And Production Harrier? 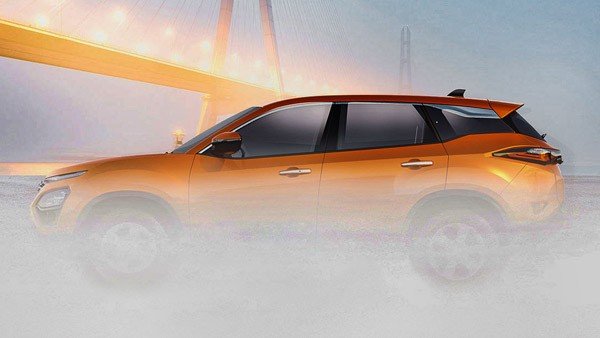 On the top of that, we should acknowledge that Tata Harrier will be on the larger side of the segment of SUVs within its price range. In fact, it is a tad bigger than other competitors like Hyundai Creta, Jeep Compass and Mahindra XUV500. Here we will compare the dimensions of Harrier with its rivals mentioned above so that you can get a better idea on how the Harrier advances from others in terms of size.

Hyundai Creta is a segment-leading car, and obviously, Harrier’s biggest rival. Despite that fact, its strength doesn’t lie in the size. Hyundai Creta is indeed not a big car in general, and the Harrier easily takes one step ahead of the Creta in terms of dimension. More specifically, the Tata’s five-seater is longer, wider and higher than the Creta by 328mm, 114mm, and 84mm respectively. And its wheelbase is longer by 151mm. Hyundai Creta is on the smaller size on this lot

If Hyundai Creta is loved by the mass, the Compass from Jeep is particularly fancied by people who love off-roading cars. And Tata Harrier also aims at being a good company for off-roading trips too. In this aspect, having a bigger size would mean that you could impose a better road presence. And the Tata Harrier wins hand down in this battle. It is 203mm longer, 76mm wider, and 74mm higher than the Compass. Unlike the Harrier, Mahindra XUV500 is a seven-seater, which means it requires a larger space, and so, a bigger dimension. In reality, the Mahindra XUV500 only marginally exceeds the Harrier in height. For the rest, Harrier is the winner. Harrier edges out by 13mm in length, 4mm in width. Mahindra XUV500’s wheelbase is 41mm shorter. Even though having a larger seating capacity, Mahindra XUV500 has smaller dimensions than the Harrier

After some simple figure-to-figure comparison, we could take away one fact that the Harrier will be among the largest cars in its class. It would also mean that the SUV will have an advantage over others in terms of space. But as far as the weight goes, a large body does take a toll on its kerb weight. Hyundai Creta, the smallest model out of the four, ends up with the lightest weight while the XUV500 weights the most at 1785kg. Mahindra XUV500 and Jeep Compass’s 4WD systems have added more mass. But on the positive note, it will allow better dynamics for them. Sadly, the Harrier is not going to be packed with an all-wheel-drive system at launch.

Another takeaway is that the Harrier, despite being downsized a bit from the concept car, displays thicker tyres than the Creta and Compass, and is on par with the XUV500.

Under the hood, the Tata Harrier will be exclusively powered by an all-new 2.0-litre four-cylinder engine which is named Kryotec 2.0. This motor is good for 140bhp and 350Nm. This engine is claimed to bring in a better fuel economy and environment-friendly performance, which will get on well with the upcoming BS-VI emission norms. And there is only one option for transmission which is a 6-speed manual gearbox. So we will put this powertrain into the comparison with other models’ diesel-manual version.

As far as we know, the Harrier’s engine is borrowed from the Compass and is tuned for a different output. The 2.0-litre engine on the Compass is good for the same torque of 350Nm. It could deliver the power of 173bhp, which is higher than the Harrier by 33bhp, making it the most powerful engine here. Mahindra XUV500’s 2.2-litre diesel engine with the largest displacement comes up with the power of 155PS, and at 360Nm, it is also the torquiest motor of the lot. On the other hand, Hyundai Creta, the smallest car, comes with the smallest motor of 1.6 litres. All the mentioned models come packed with a 6-speed manual transmission unit.

To look at a bigger picture, the Creta has offered customers with another a 1.6-litre petrol engine, with both manual and automatic gearbox, not to mention the automatic unit also available on the diesel version. The Compass gets 1.4-litre petrol engine that comes with both manual and automatic option. For the XUV500, automatic gearbox is available for both diesel and petrol engine. It seems that Tata Harrier is slacking off with a limited number of powertrain alternatives. If Tata does not extend their range of choices soon, it will be easily defeated by other rivals.

With more information about the Harrier to come in the near future, we will soon be able to compare its features with other rivals. For the time being, it looks like the Tata Harrier has made a pretty strong case for itself in this battle.