Cricket players are every Indian’s heroes. Besides their love for the sport, some of the players are keen car lovers and owning some mouth-watering car collection. Find out more on this article.

Along the life on the cricket field, Indian cricket players also enjoy an extravagant lifestyle, which could easily see through the vehicles that they drive. It is predictable that these sporty men would love to fill their garage with the sports car with incredible speed and energy. Once you see their cars, their sports talent will no longer the only thing that you adore in them. We will give you the details of every India cricket stars and their cars.

The fame of Virat Kohli, the current captain of the Indian cricket team, has gone beyond the national border to reach the international stage. He’s among the greatest batsmen in the world. Besides the love for cricket, he also shows an intense interest in fast cars. Recently dubbed as India’s richest sportsman, it is not a surprise that he could afford a fortune to buy not one but many luxury sports cars.

His whopping car collection includes five Audis, namely, an R8 LMX Limited Edition, an R8 V10 Plus, A8L W12 Quattro, S6 and a Q7. His Audi A8 L W12 costs around 2 crores. With 494 bhp of power and 620 Nm of torque, it is among the most powerful cars in his collection. Along with the stylish and plush fast cars, he also owns some common models like Toyota Fortuner and Renault Duster – all are great tough off-roaders. Mahendra Singh Dhoni – one of the greatest cricket players in Indian history – is widely known as a motor enthusiast who owns an extraordinary collection of expensive motors. But motors aren’t his sole passion. He also has a fancy garage filled with pricey cars and SUVs, his favourite car type.

One of the most unforgettable moment with his car is the time when he driving his Hummer along sides the New Zealand cricket team’s bus back in 2016. As all of us should do, all other players could not hide their sheer wow. Classic! Besides the rugged Hummer, the famous sportsman also has a GMC Sierra Porsche 911, Ferrari 599 GTO, Audi Q7 parked in his garage. 599 GTO must be the coolest and the most powerful car in his collection with 661bhp of power output. Besides the lavish luxury cars, some affordable models that are also found in his collection are Mahindra Scorpio, Toyota Corolla and a Mitsubishi Pajero.

Sachin Tendulkar is dubbed as the God of Cricket. Besides his worldwide fame as a great cricket player, Sachin Tendulkar is also known as a huge fan of sports cars. One of the most noticeable car in his collection is the Nissan GTR. This car is literally a beast with 550 bhp of output power and it takes just 2.9 seconds to do the 0-100 sprint.

Besides the GTR, Tendulkar, as the ambassador of BMW India, has a great collection of BMW cars that includes an M5, M6 Gran Coupe, 7 Series, X5. The latest purchase is the i8 which is customized with the red coat. 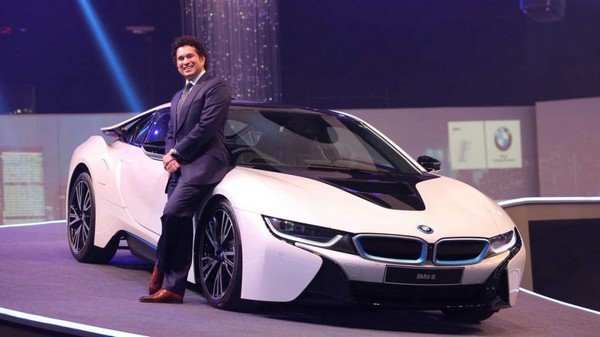 As the ambassador of BMW India, Sachin Tendulkar owns a mouth-watering collection of BMW cars

One memorable previously-owned car of Tendulkar is the Ferrari 360 Modena. This is a significant car as it is a gift from the legend of Formula 1, Michael Schumacher. But he sold the car later.

We could not refer to Yuvraj Singh without mentioning his legendary moment when he hit 6 sixes in an over. The moment has brought him fame and fortune and of course, a freedom to collect a heavenly car collection. Earlier in his career, he chose a Honda City, but as his career climbs up, now he is able to afford sky-high priced cars like Porsche 911, a BMW M5 and an Audi A5, and most importantly, Lamborghini Murcielago. Yuvraj  Singh is the owner of a brilliant orange Lamborghini Murcielago

Harbhajan Singh or the Turbanator is a big fan of SUVs. On his garage, you can find a Hummer which is able to unleash 393bhp of power. The Hummer is definitely favourite by Bollywood celebrities. Besides, he also has a Mercedes Benz GL Class and a Ford Endeavor. Harbhajan Singh is a big fan of SUV

The 25-year-old cricket player has recently got himself a customized red-painted Mustang. It is not just a sleek car to boast about, what’s more, the licence place of the car’s last three digits happens to be 303, the highest test score, making it an ever more valuable car. 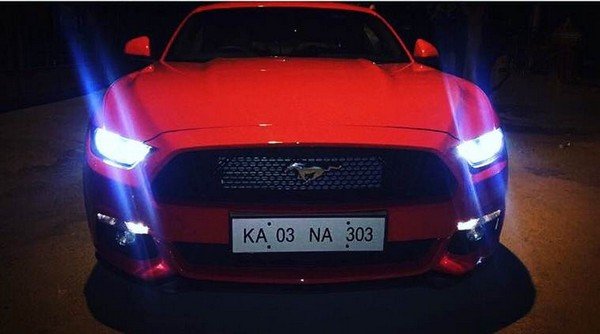