Being the only automaker to offer official modifications for its vehicles in India, Mahindra has successfully customized many of its vehicles. Below is the list of the 10 best modified Mahindra SUVs in India. Thanks to comprehensive customizations, the Mahindra Bolero has been made to completely look like a Jeep Wrangler. The Bolero is equipped with a 7-slat grille to resemble the signature feature of the Wrangler. Large fenders, wide ORVMs, robust Maxxis Bighorn LT 315/75 R16 tyres as well as redesigned door panels and handles are some of the most outstanding modified features of the Mahindra Bolero.

The cabin of the Bolero has also been thoroughly redesigned with a modified dashboard, dual sunroofs, and upmarket seats. It took the domestic automaker months to complete the modifications.

When mentioning the best modified Mahindra Bolero SUVs, it would be such a serious mistake to forget the Mahindra Stinger, which is based on an older version of the Bolero. It gets round headlamps with indicators instead of the square units on the normal vehicles, a chunky two-tone bumper, and four fog lamps next to the skid plate. Other modified features include a dual-cab pickup layout, a modified front bonnet, and new fenders with faux air vents. The Bolero Stinger is another interesting modified SUV of Mahindra

Undoubtedly, India's beloved off-roader vehicle, the Mahindra Thar has received many modifications from the home-grown automaker. The most stunning and the best modified Mahindra Thar must be the Mahindra Thar Daybreak. Available in two versions, a hardtop version and an open-top one, both of them will impress you at first sight. The Mahindra Thar Daybreak is the most stunning modified Thar

The SUV rides on big 37’’ Maxxis tyres for enhanced off-road capacities. It comes with a modified hood, customized fenders, a winch fixed on the front bumper, a roll cage, a high-lift jack, and even a redesigned exhaust pipe.

The home-grown automaker has also equipped the vehicle with differential gear and a refined suspension to optimize the off-roader capabilities. The vehicle is modified from the outside to the inside with a touchscreen infotainment unit and a new driving wheel. The dashboard gets red stripes, which makes it look more attractive.

The Mahindra Thar Wanderlust, which was displayed at the Auto Expo 2018, is based on the Daybreak in a more robust version. It gets some new features such as a redesigned front grille, oversized tyres, customized fenders, and a gullwing rear door, all of which add to its wild attraction. Moreover, the dual exhaust pipes make this vehicle outstanding from the crowd. The Mahindra XUV500 Moonraker is another customized vehicle officially produced by the domestic auto manufacturer. While many other XUV500 SUVs are over-modified, the Moonraker is a combination between the impressive and the practical. The Mahindra XUV500 Moonraker absolutely stand out from the crowd

The Moonraker features a green army colour all over the body with an Indian flag on its aftermarket bumpers. Five dune lights are integrated into the top of the SUV. Moreover, a large body cladding is smoothly connected to the wheel arches. Mahindra has also added a cargo box to the rear of the vehicle. Although many modifications have been made to the exterior design, it is the front grille that is kept intact to maintain the identity of the vehicle. All of these customizations are certain to help the Moonraker attract the attention of all car lovers on the road.

Being one of the most popular seven-seat SUVs with Indian auto buyers, the Mahindra Scorpio is also an interesting modified Mahindra car. It has been modified into a Hummer 2 and comes with a single-cab pick-up truck body with the latter half of the body chopped. 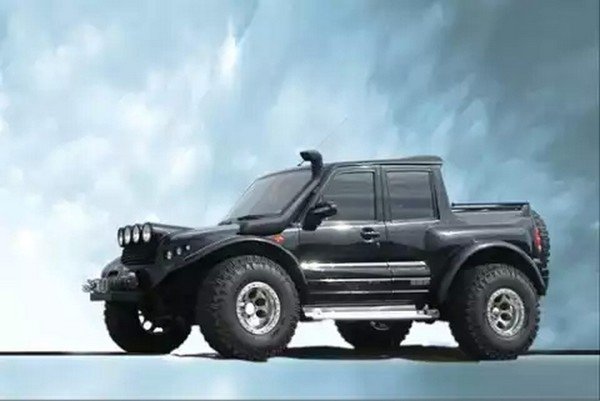 Four lamps are positioned on the hood of the Scorpio Hummer and there is also a snorkel. It is also equipped with aftermarket alloy rims. The SUV rides on very large aftermarket tyres and aftermarket fenders, which helps the SUV has a wide on-road appearance.  The Scorpio has now been designed to become a two-door pick-up truck from a stock four-door one.

Another modified version of the Scorpio is the Scorpio Darkhorse. The vehicle features a more aggressive appearance than the normal SUV. The Darkhorse comes with an overall grey paint scheme with some orange highlights. The modified features include a square wire-mesh grille, customized three-pod headlights, a new bumper with two fog lamps, and large air intakes on the top of the bonnet. The Scorpio Extreme has a dual cab pickup truck layout. Other modified features consist of new auxiliary lamps integrated to a metal bar on the front bumper, a new sunroof, and plastic cladding above the wheel arches. The vehicle gets a yellow or white paint scheme all over its body, which makes it outstanding in the grey Indian city due to the serious air pollution.

The Scorpio Mountaineer seems to be a combination of the two previous models. The single cap pick-up truck is equipped with three-pod headlights and a new front grille. Additionally, it is also equipped with a wide range of customized features comprising of deep dish alloy rims, large off-road tyres, side scoops, etc. And even a pickaxe is mounted to its side to add to its wildness. In the front, the Mahindra TUV300 is equipped with a new bumper and a new grille integrated with the fog lamps. The vehicle also comes with a new faux scoop and aftermarket wheel arches which totally change its look.  Dune lamps are mounted to the top and aftermarket roof racks are also added to make the car even more appealing. Other features like headlamps, tyres, and taillights remain the same.

Above is the list of 10 of the best modified Mahindra. Which of the “custom-built” SUVs from Mahindra impresses you most? Share with us in the comment section below.