105 0
Dwayne Douglas Johnson (also known as the Rock) is not only famous for his spectacular career at WWE but also for his excellent acting skill in Bollywood. This article is going to present to you the impressive Dwayne Johnson car collection.

Commencing his career as a professional wrestler, Dwayne soon became one of the most successful wrestlers in the world in the 21st century. Nevertheless, he took the world aback by deciding to become an actor. Entering Hollywood, Dwayne has, once again, dominated Bollywood by starring in numerous action movies consisting of San Andreas and Fast and Furious franchise. Is the actor’s car collection harmonious with his career? Read on to discover. If you are interested in Indian celebrity car collections, please pay a visit to IndianAuto.

You might wonder how such a low riding sports car like the Pagani Huayra could accommodate a muscular man like Pagani Huayra. However, surprisingly, last year, Dwayne was spotted travelling in a Pagani Huayra, which costs up to $1.3 million, to the HBO show Ballers premier. In the photo below, we can see that the actor sits very joyfully inside the car with the right half of his body taken out, laughing and posing for a photo although getting out of the car would pose numerous challenges for the actor. Surprisingly enough, The Rock managed to fit into the Pagani Huayra.

Being one of the highest-paid Bollywood actors, Dwayne Johnson is expected to own the Bugatti Veyron or another hypercar as its favourite vehicle. Nevertheless, the most common car image in his Instagram is of the F-150 custom-built pickup truck. The vehicle is widely understood to be the superstar’s favourite vehicle. The Ford F-150 Pickup is the favourite vehicle of Dwayne Johnson.

The LaFerrari is the flagship vehicle of the world-famous Italian auto manufacturer. The car receives its power from a 6.3-litre V12 motor combined with an assisting electric motor which can generate a maximum power of 950 BHP.

An extremely rare matte white LaFerrari car was given to Dwayne as a complementary product, which was soon realized not to fit the actor’s robust body. The car designer seemed not to have considered The Rock’s body when developing it. Nevertheless, Dwayne grabbed the opportunity to take some photographs beside the car. Given to Dwayne as a complementary product, the Laferrari, unfortunately, could not accomodate the superstar's robust body.

Nowadays, a superstar’s car collection would not be complete if it lacks a Rolls Royce vehicle. That of the Rock is not an exception.

In this picture, the Rock was shot when having just getting out of his Rolls-Royce Wraith before getting onto the plane. The vehicle keeps under its hood a 6.5-litre twin-turbo V12. However, what makes the photograph interesting is the Rock himself who is wearing like a Maui rock god with a guitar in hand and wearing sandals. What makes this photograph special is not the car but Dwayne himself who is dressing like a Maui rock god.

Crazy, cool and bulky, like the superstar himself, are the characteristics of the 1999 Plymouth Prowler. While filming Pain and Gain, Dwayne was seen driving a Plymouth Prowler which got a purple metallic paint scheme. The car can reach a maximum speed of 118 mph and 62 mph from a standstill in 5.9 seconds. Although the car is perhaps not included in Dwayne’s car collection, in our opinion, it should be included in this list because of its abnormal design, as you can see in the picture below. 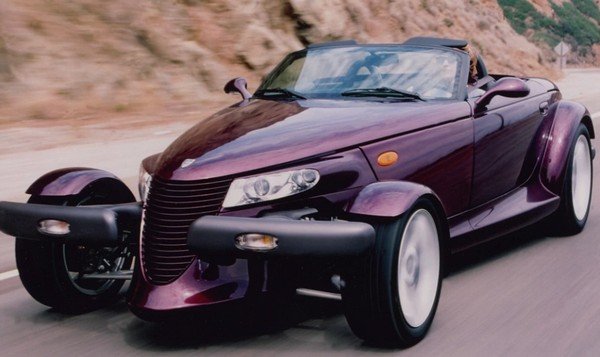 Dwayne was spied driving a Plymouth Prowler which comes with a purple metallic colour.

For your information, the Rock is the ambassador of Ford. He has been present in many of the launches and commercials of the American auto manufacturer.

In 2016, the superstar spent time in numerous different departments of the brand with a view to understanding the production better. One of the most outstanding cars turned out to be the 2017 Ford GT.

The car is among the most iconic Ford cars ever. The Rock was shot beside the racing GT which was the winner of the 2016 24 Hours of Le Mans endurance race. Nevertheless, the dream of driving the car never became a reality since again, like the LaFerrari, it could not accommodate the robust body of the superstar. Despite being the ambassador of Ford, The Rock could not drive the 2017 Ford GT due to his big size.

Dwayne does not only drive supercars but he also often gives them away. In January 2017, Johnson was initially asked to reveal the new 2018 Ford Mustang to the whole world. Nevertheless, the actor does not only disclose the car but also gifted it to US veteran Marlene Rodriquez, who was completely shocked and moved by the superstar’s generous action. 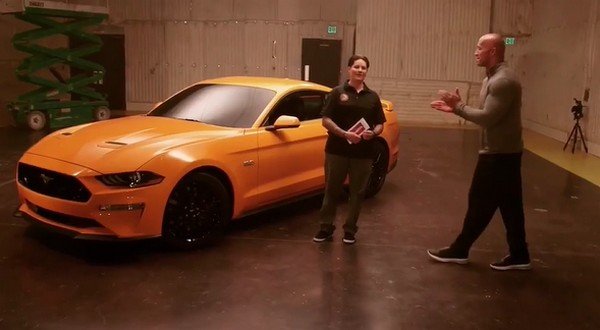 The Ford Mustang was gifted to Marlene Rodriquez by The Rock.

Overall, Dwayne Johnson is a robust, kind and generous superstar who owns a collection of extremely cool cars. Which car in the above list impresses you the most? Share with us in the comment section below.