Recently, a Toyota Fortuner which belongs to the Inspector General Police was fined for stopping before a zebra crossing.

Last year, the Motor Vehicle Act was amended, which later sparked controversy in society. According to the new MV Act, the punishment for traffic law violation is reinforced and the fine is significantly increased. It is expected to redefine the current unorganized traffic system. In particular, the new regulation also imposes a double fine amount for the government authorities and police officers. Recently, a similar case happened in Chandigarh when a police officer’s Toyota Fortuner was fined for running pass the zebra crossing at a red light. 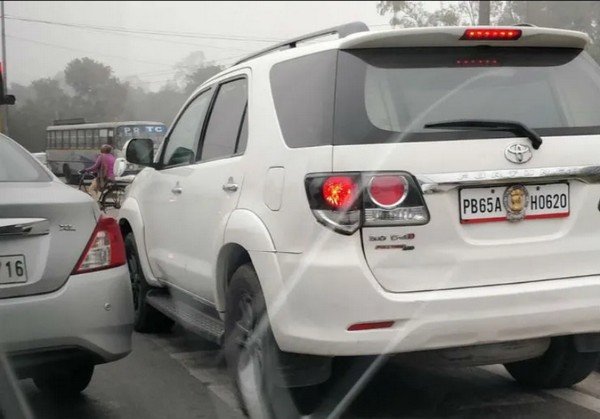 According to some reports, the incident occurred around 8.30 AM on Saturday near the Hallomajra traffic light. The Toyota Fortuner which is believed to an asset of Special Protection Unit of Punjab Police has run over zebra crossing at a red light. A commuter has captured a picture and shared it with the Chandigarh Police via Twitter. Chandigarh Police has issued Traffic Violation Information Slip for this vehicle.

According to the registration number plate of the Toyota Fortuner, this car is under the ownership of the Inspector General of Police of Special Protection Unit. However, it is not clear Toyota Fortuner serves for his personal drive or it was a unit of the convoy as in most police departments, the vehicles will be registered to the name of the head official.

Regularly, a commuter will be fined Rs 500 for stopping before a zebra crossing and the online report reveals the pending fine of Rs 500. However, in this case, since the vehicle belongs to the Punjab Police, the fine will be doubled, meaning the violator will have to pay a fine of Rs 1,000. In the time of the incident, a driver of the Punjab Police was seating behind the steering wheels.

The new Motor Vehicle Act was implemented across various states in India. The implementation of a stricter regulation is hoped to force the traffic participants to strictly follow the law. Currently, India roads are listed among the most dangerous traffic system in the world with an astoundingly high number of accidents and fatalities. Even though the enforced law is meeting with strong resistance from motorists and drivers. Some states have cancelled the new fining system. To read the latest car story, visit IndianAuto.com.