Among thousands of modified cars in Kerala, IndianAuto gives you some best-looking modified vehicles in Kerala including the modified Honda City, Honda Civic, Volkswagen Vento and Kia Seltos.

Kerala is known for a whole array of modified cars on the roads. Despite the fact that serious car modifications are now illegal in India, modified cars have never stopped hotting up in Kerala. Being a large hub for customized and modified vehicles means that there are many awesome modified cars in Kerala that will blow our minds completely.  Among them, IndianAuto has compiled some of the most fantastic customized vehicles in Kerala, with our list including the long-running Honda City, Tata Xenon to the new-coming Kia Seltos.

Honda City is a massively popular car name, not only for India’s new cars section but also the Indian modified cars enthusiasts. Car modifiers in Kerala have an intense passion to modify the Honda City hence you can find a lot of modified City in the Southern state. By some visual and mechanical changes, this modified Honda City looks ways better and more exciting than the standard model. 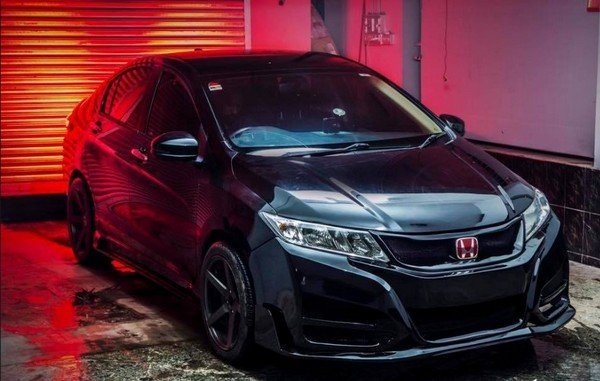 The all-black body paint scheme gives the car a flamboyant aesthetics, something more mysterious and premium. The front and rear bumper of the Honda City has been redesigned for a more aggressive look. The side profile of the City sees the infusion of the custom side skirt. The after-market 17-inch alloy wheels also make a perfect distribution to the sporty quotient of the vehicle. Refreshed LED taillights with lower ground clearance and four exhaust tops are also parts of the car mods in the Honda City.

This modified Tata Xenon in Kerala ends up having a macho cosmetic appeal and brute road presence, making it a perfect car for those having a keen nose for a true-blue off-road-focused beast. The Tata Xenon itself, in the original stock form, is quite a looker with the tough and aggressive trait. However, this modified Xenon looks even madder in its new coat, thereby making it one of the toughest modified cars in Kerala.

The front of the pickup gets aftermarket blacked-out headlamps and an off-road spec bumper in place of the original units. A large LED lamp are attached to the roof while the rugged off-road tyres and flared wheel arches add to the badass look. The canopy that covers the rear flatbed perfectly sums up the list of mods to the modified Tata Xenon pickup truck.

Built by 360 Motoring in Kerala, this modified Honda Civic appeared like a “green goblin” at the annual Tech-Fest. Heavy modifications have been added to both the exterior and interior of the car, showing off the modifier’s skills and prowess. The Honda Civic now looks nothing more than an “opulence”. The gorgeous-looking green cover of the Honda Civic is just amazing to look at. The headlamps of the modified Civic looks sharper with corona rings and a LED lining underneath. The blacked-out lip spoiler stands out on the green colour scheme. New custom LED taillamps, a larger exhaust tip, refreshed rear splitter and a larger spoiler wing are the major highlights on the customization package of the modified Honda Civic. The frosting in the cake here is the front doors. They can be opened upwards, similar to the Lamborghini’s signature scissor doors.

The interior design of the customized Civic is rather flashy. The modifier seems to play the colour card on Civic sedan, as barring the shinning green appearance, purple with green inserts are the main theme on the inside of the vehicle.

Mahindra Thar is a well-known car among the Indian modified cars lovers and this modified Mahindra Thar should be one of the best looking modified cars in Kerala. The custom blue skin complements the butch look of the Thar. It also helps the Thar stand out from the crowd where there’s a school of grey, black and forest beige painted SUVs reining over the Indian roads. This modified Mahindra Thar undergoes a lot of mod jobs on its profile including the refreshed headlamps with dual projector units, Wrangler-like hardtop, off-road bumpers, ARC composite rear leaf springs, tweaked fenders along with 15-inch 10.5J steel rims shod in the massive 33-inch Maxxis tyres. Are these enough for the most spectacular off-road manoeuvre and handling?

If you are finding a flawless modified Volkswagen Vento, Kerala would offer you a whole bunch. However, this matte-black modified VW Vento is more than perfection. The matte black-golden colour combination matches up to the Vento even better than the stock version. The modified car features subtle design mods but that’s totally enough. The golden wheels certainly become the icing on the cake here, something that we can ever see in luxury vehicles. It remains to know if the aftermarket fitments are made to the interior of the modified Volkswagen Vento but we’re sure that, if any, they should be as classy as the exterior. 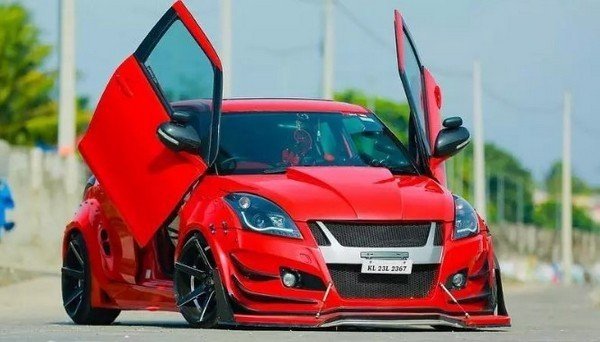 The custom Maruti Swift features a sporty silhouette from the front to the rear and outside to inside. The aftermarket projector headlamps take up the place of the original units while the stock wheels also make way for the sportier 18-inch 6-spoke wheels with lower-profile tyres instead.

The grille is totally redesigned. The bumpers, both front and rear, have been freshened up and the Lamborghini-inspired scissor doors, of course, aid much for a more aggressive appeal. The plush cabin of the modified Swift boasts of a red colour scheme, premium wood-finished steering alongside a host of feature updates. We’re not sure about that but some powertrain upgrades might have been made underneath the bodywork for greater performance gains.

A perfect end to the list of modified cars in Kerala should be this, the modified Kia Seltos. In the stock form, the Kia Seltos is apparently a handsome car that is partly attributed to its roaring sales success. However, in the car modification world, the public seems to have an insatiable appetite for anything but nicer. Customised by Perfamana, this Kia Seltos was given a couple of modification jobs that leverage the beauty of the SUV to a new level. The bumper, grille, pillars, wheel arches and front & rear lips are all blackened out for a more premium visual effect.

Also Read - Modified Cars in India: What Is Legal and What Is Not?

A new set of 19-inch TSW wheels looks sportier and parallel with the contrast glossy black roof, all deliver a good combination with the main wine-red colour theme. We can also spot a comprehensively done-up interior of the modified car and the major highlight belongs to the stunning red quilted leather-wrapped seats. Overall, this is one of the coolest modified cars In Kerala. A true head-turner on the roads, isn’t it?

For such more interesting car stories about modified cars in India, stay updated with Indianauto.com!