The love for four wheels coupled to a fifth wheel, which is often used to direct the other four, is limitless. It starts from the car, one learns to drive and goes all the way to a mighty fast sportscar. Sportscar? No, to a supercar, since everyone loves speed. Let me bring to your kind attention that warp speeds and supercars do not go hand in hand anymore in this fast-moving world. It is hypercars, which are all about speed now. Not only speed, but hypercars are also about that “hammering you inside the seat” level of acceleration, precise handling with capabilities to cheat wind better than a bullet train. One such hypercar in existence is making it all to the limelight these days with a new top speed record. It's known as the Bugatti Chiron.

Also Read - When A Bugatti Is Made Out Of Lego. File photo of a Bugatti Chiron at Volkswagen's testing facility in Germany.

Manufactured in Molsheim, France, the Bugatti Chiron surpassed the VBox records of the eternity by registering a new speed record for a production car. By going faster than any car ever could go, the Chiron clocked a top speed of 304.773 mph! Mind-staggering, ain’t it? 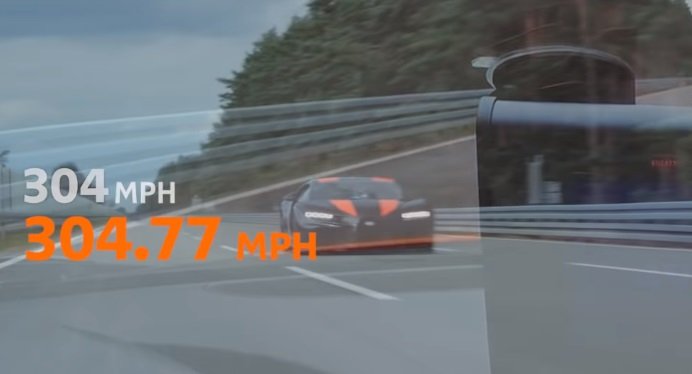 The Chiron clocked a world highest 490kmph, which is fastest ever in a production car.

The speed record achieved by the Chiron should be applauded, but due credits should also be given to the people who were behind this mental task, which was convoked at whirlwind test track of Volkswagen in Ehra-Lessien, in the Lower Saxomy state of the Deutsche country.

On breaking past through this trammel of speed, which is not expected to happen again anytime soon, Stephan Winkelmann, President, Bugatti stated, “What a record! We’re overjoyed to be the first manufacturer ever to have achieved a speed of more than 300 miles per hour.” “It’s a milestone for eternity. I would like to thank the whole team and driver Andy Wallace for this outstanding performance,” he added.

Bugatti team preparing the car for the final run with tyre expert Michelin.

To orchestrate such skirmish combat on the speed war, it requires a pretty big team to make this happen. To travail the result, a team of Bugatti to maintain the car, another from Michelin to expertise the tyres for the summit, and yet another from chassis expert, Delara wizard, toiled themselves for almost 6 months to locomote this project from imagination to blueprint on paper to a real achievement.

Since, crossing such speed barrier every day is not possible, as the 1500 Bhp, quad-turbo, 8.0L W16 engined Chiron cost northwards of 3 million is not accessible so easily. Not only this, the mighty homo sapiens who were involved in this project, the driver, the team, the venue, and the validators are not available every day. So let’s cherish this achievement, with popcorn, to make waiting for another such record an easy affair.

Also Read - All You Want To About The World’s Fastest SUV Lamborghini Urus.