When A Bugatti Is Made Out Of Lego

Lego is the toy that all kids have once dreamed of and is the proof of a creative childhood. Bugatti cars are the vehicles that all adults are excited to have and are the evidence of success. What would happen when the two come together?

Remember the time when you built a supercar or a badass truck out of interlocking toy bricks, pretended that they were moving for real, and held the most epic race ever? Well, a major fantasy from your childhood came true as Lego built the first ever 1:1 copy of Bugatti Chiron from Lego pieces ever. And what is even more amazing? IT CAN DRIVE!!!

1. How the Lego Bugatti Chiron came about

Lego Technic has the slogan that goes “Build For Real”, and they wanted to prove that Lego is more than just toys for kids, you can build for real with the Lego blocks. So that was how the Lego version of Bugatti Chiron started.

In the LEGO facility in Kladno in the Czech Republic, where the most amazing LEGO models are built for Lego stores and LEGOLAND parks all over the world, designer Aurelien Rouffiange put together a team that contained all types of specialists needed, from design and electrical to mechanical. This team of 16 people worked over 13,400 man hours to craft the Bugatti Chiron piece by piece and to make it run.

The first rule that they had was that at least 90% of the car had to be built with Lego Technic elements. So apart from the set of real Bugatti tyres, the Bugatti logo plate on the front grille, and the steel frame on which the Lego car was built on, other parts, including the working door hinges and the functioning engine, were all made out of Lego elements. In its entirety, the life-size Bugatti Chiron was constructed from 339 different types of Lego Technic elements, which made a total of more than a million pieces, all stuck together without glue. The car was assembled from more than 1,000,000 Lego Technic elements without glue

The design of the original Bugatti Chiron is very sleek and there is pretty much no straight line, so the team came up with a brilliant solution to solve that problem. They divided the surface of the car into small triangles and connected them with flexible elements, the result of which was a curved body exactly like that of a real Chiron. To adjust the “skin” of the Lego Bugatti Chiron, they constructed a special yellow machine that was also entirely made of Lego Technic elements.

The team wanted to replicate every single iconic detail of the original Bugatti Chiron, so they set out to create a functioning rear wing and Chiron’s unique light system. The rear wing was one of the greatest technical challenges on this Lego version of the Bugatti Chiron, and it was powered by Lego Technic power function and pneumatic systems. The iconic Chiron’s light system, which consists of the front light’s “dance” and the rear light bar, was reproduced entirely by Lego Technic elements, and the Lego version worked just the same as the original one. The rear wing and the light system were also replicated perfectly

As if the Lego car was not impressive enough, the team decided to make it run, too. They tested different materials like Lego Technic gears, Kevlar, and carbon fibres, to see which one could handle the 1.5-tonne Bugatti toy car. The result was surprising even to the specialists: Lego Technic gears came out as the best material. So, they constructed an engine that could propel the Lego Chiron from 2,304 Lego Power Functions motors, 2,016 Lego Technic cross axles and 4,032 Lego Technic gear wheels. The engine had a claimed performance of 5.3bhp and produced an estimated torque of 92 Nm. What’s more? The Lego engine was connected to a functioning speedometer that was built completely from Lego Technic elements.

Lego even invited  Andy Wallace, Bugatti’s official test driver and former Le Mans winner, to test drive the Lego Bugatti Chiron, and the man was super impressed by how the Lego car picked up its speed and the uncanny resemblance between the original and the replicate. Even though the top speed of the Lego version was only 18 mph (29 km/h), which was pretty much nothing compared to the real one’s top speed of 261 mph (420 km/h), to receive compliments and validation from the man who test drove the official Bugatti Chiron was the biggest praise the team could ever get. 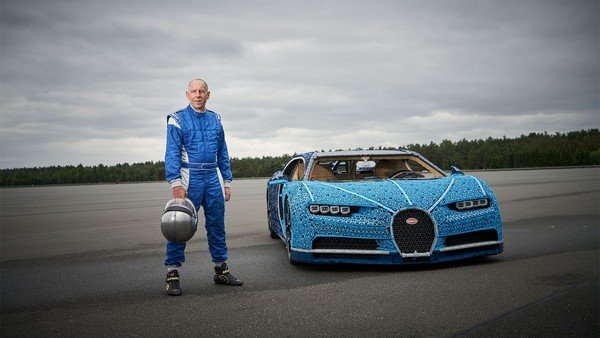 Andy Wallace, the official Bugatti pilot, drove the Lego Bugatti Chiron and the car reached the speed of 18 mph (29 km/h)

>>> The Most Questionable Car Modifications In The History